LOS ANGELES — Bullet Train is the closest we’ve ever come to stepping into Neo’s shoes.

The latest virtual reality demo from developer Epic Games captures the awesome slow-motion fight scenes from The Matrix in a way no other game has done before. At this week’s Oculus Connect 2 conference in Hollywood, Epic (known for action-packed blockbusters like Gears of War and Unreal Tournament) unveiled a first-person shooter where the player kills enemies using the wireless Oculus Touch motion controllers. These controllers simulate your hands and fingers in VR, allowing you to do things like pick up objects and throw them around.

Demos like Bullet Train help show what developers can achieve with the Oculus Rift VR headset (releasing in Q1 2016) and its specially designed controllers (coming out a few months after the Rift).

While nothing’s more common in games than shooting people with guns, the experience felt remarkably different with Bullet Train. Like in traditional shooters, you have to use the trigger buttons to fire your weapons. But the motion tracking in the Touch controllers offer a drastically different experience. You aim with your hands instead of with a mouse or analog stick — It’s so much faster to kill things that way.

Oculus Touch also provides a more tactile feel to the game because you actually have to pick up and hold onto the weapons before you can use them. This is what the middle trigger (where your middle finger rests) on the Touch controllers are for. With those held down, you use a separate trigger (resting underneath your index finger) to fire the guns. 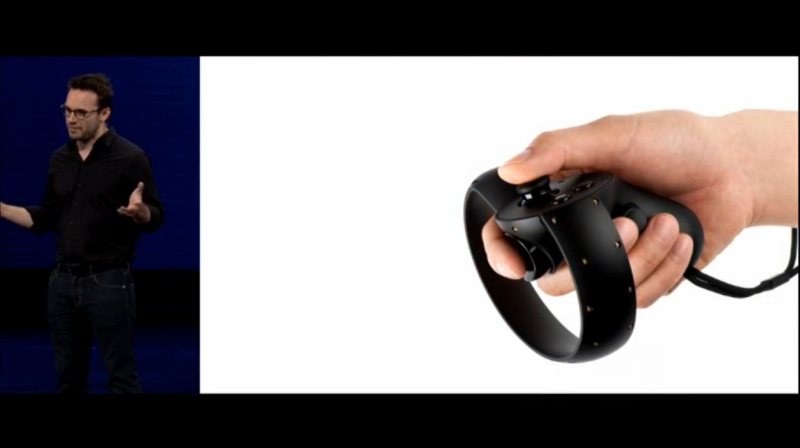 Above: Oculus Touch shares some similarities with PlayStation 4 and Xbox One controllers.

Moving around in Bullet Train doesn’t require as much thought as the weapons. It has a teleportation system that warps you to different parts of the train station by holding down one of the face buttons. Doing this also slows down time — the popular “bullet-time” effect from The Matrix — making it easier to retaliate or retreat to a safer spot.

It might sound complicated on paper, but it’s actually intuitive. Remembering to hold my weapons was the trickiest part (I accidentally dropped them a few times when I meant to shoot). After a few minutes, I was warping around the battlefield like a pro. With a shotgun in one hand and a pistol in the other, I was blasting bad guys left and right. When I ran out of bullets, I simply tossed the guns away (or threw them at my enemies) and teleported to a new place to find more.

If I wanted to feel even more like a badass, I’d just hit the slo-mo button and grab bullets from mid-air to throw them back at my enemies. I felt untouchable. In this world, I was Neo.

Everything was going well until my left-hand controller stopped working. 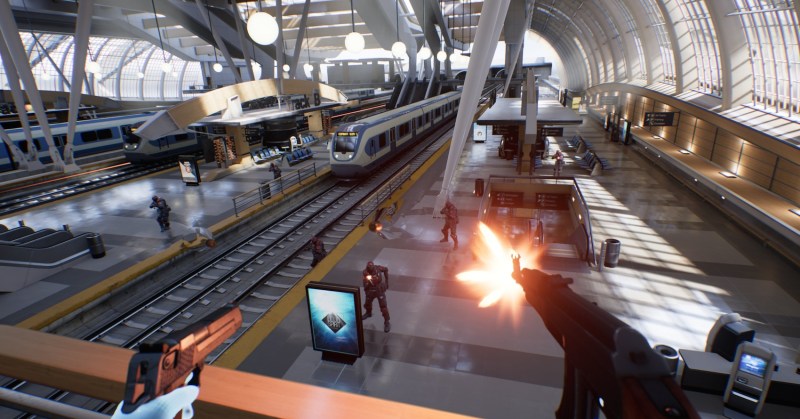 Above: Dual-wielding guns have never felt this good.

With my in-game hand gone, I couldn’t multitask like before. When a giant octopus-like robot descended on the train station, I just had to rely on my right hand to capture its missiles and turn them around to hit the mechanical beast instead. It was a bit of a bummer, but not entirely unexpected — the Touch controllers I played with were prototypes, after all. I still had a good time. (Oculus VR founder Palmer Luckey later explained to me that this was a known issue with a particular batch of controllers.)

The second time I played Bullet Train, however, was perfect. I discovered new things I hadn’t seen the first time around, like the way you can reload the pump-action shotgun by sliding the handgrip back with your other hand. The machine gun also had a similar two-hand reloading mechanism.

It’s those little details that made Bullet Train such a cool experience. Having virtual hands and fingers in an FPS makes such a huge difference. I can easily see Epic Games expanding the concepts from Bullet Train in a full-fledged game for the Oculus Rift one day.

And if it doesn’t, I hope other developers are paying attention. This is how shooters should feel in VR.