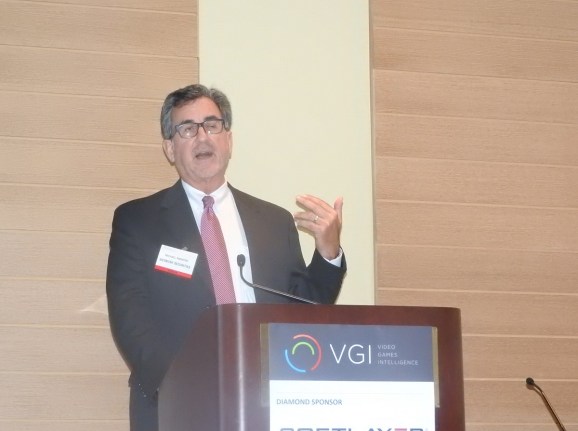 Michael Pachter predicts that the consoles will die, but it will be a very slow death over the coming years.

Speaking at the Cloud Gaming Summit in San Francisco, the managing director and game analyst for Wedbush Securities said that consoles will last longer than he thought in the past, as the audience slowly dwindles and other devices become much more capable of running outstanding game experiences. In other words, it’s a slow death, but so slow that nobody needs to panic about it.

Pachter said that the consoles have made a successful leap from packaged goods games to digital sales. Packaged goods sold at retail once accounted for $25 billion in North America in 2008 and have now declined to $8.9 billion in 2014. But digital console game sales have grown 450 percent in that time to $17 billion. All told, console game sales are roughly unchanged, and to Pachter, that’s a respectable performance given the competition from other gaming platforms.

Games are reaching a much bigger audience thanks to mobile, with the overall market looking like this: 1.4 billion phones and tablets, 2.5 billion PCs, and 260 million game consoles. He noted that his wife didn’t play games for many years, but she was finally sucked in by Candy Crush Saga on mobile devices.

“My parents thought I was a degenerate because I went to the bowling alley to play games,” Pachter said. “Now everybody plays. Ultimately, we’ll have 5 billion people playing games.”

Pachter said he believes that dedicated game consoles will reach smaller audiences in future generations (and he does think there will be future generations). But he added, “As long as Microsoft, Sony, and Nintendo are solvent public companies, they will make consoles.”

As for the current generation, Pachter said the Wii U is toast. He believes in the best-case scenario, it will sell 20 million systems, compared to 100 million for the prior Wii generation. But more likely, Pachter believes the total number will be 12 million.

He said Sony’s PlayStation 4, the leading current game console, has “captured the magic again,” as Sony had with the PlayStation 2, its best-selling console to date. He believes the PS4 can eventuall sell 120 million to 130 million, compared to 80 million for the PlayStation 3. Sony sold 155 million PS2s.

Microsoft handicapped itself with “onerous digital rights management” and a higher price at the outset, causing a lot of gamers to switch from Microsoft to Sony with the Xbox One generation, Pachter said. “That’s like Democrats becoming Republicans, and it shows you the power of the Sony brand.”

To stoke demand for the current consoles, Pachter believes the console makers will come up with a lot more updates with new, cost-reduced models over time. He noted the Xbox 360 had seven models, while the PlayStation 3 had 12 models, compared to one for the original Xbox and two for the PlayStation 2.

If console makers want to launch still another generation of consoles, it would have to have features such as 4K display support or 8K display support and more access to entertainment such as unlimited movies.

As far as the cloud goes, Pachter believes game publishers will launch more of their own direct sales on digital portals, allowing them to capture the full $60 price of their games, compared to $36 going through other channels. That might allow game makers to cut the price of a game to $50 and still double their profits by recapturing $14 that the other distributors now keep.

As for physical store retailers such as GameStop, the future will be much more difficult. Pachter thinks they will lose 10 percent market share per year to digital distribution.

“They just get smaller, and I believe GameStop is preparing for this,” he said.

Pachter also believes that publishers such as Activision may launch more downloadable content (DLC) in the future. He noted that about 15 million people are playing the latest Call of Duty: Advanced Warfare every month, but another 20 million are playing older games. Pachter thinks Activision would do well to release more DLC for the players who are playing the older games.

“DLC plans may span two or three years,” he said.

Summing up his view on consoles, Pachter said, “I don’t think consoles will go away. But they will go the way of the Nintendo 3DS, a great product which is selling half as much as the DS [its predecessor].”

Asked how he views augmented reality and virtual reality, Pachter said, “AR game experiences will be really compelling  and supplement the experience. I don’t think VR is the killer app. Immersive video is the perfect app for VR learning. If VR reaches $50 cost, it will be a phenomenal success. But if it is $500 or $1,000, they will sell 50,000 of them.”