Microsoft is banking that the Warzone multiplayer mode in Halo 5: Guardians will be one of the big attractions that brings players back to the Halo franchise one more time.

The Halo series has sold more than 65 million units since 2001 and generated more than $4.6 billion in sales at retail for Microsoft. It has also sold countless Xbox game consoles as the flagship game series that sets Microsoft’s game machines apart from its competitors. The multiplayer mode in these games keeps players engaged year round, and it is critical for the hardcore gamers and esports fans who view sci-fi combat arenas as yet another chance to show off their skills.

This time around, the team at 343 Industries wanted to see how they could reinvent Halo combat and multiplayer. They’ve created a lot of new Spartan abilities that make you more maneuverable and deadly during multiplayer fighting. And they’ve created a massive combat mode with dozens of players called Warzone. I think it’s one of the best things that Microsoft could have done to boost the hours that people will spend on Halo 5 multiplayer. 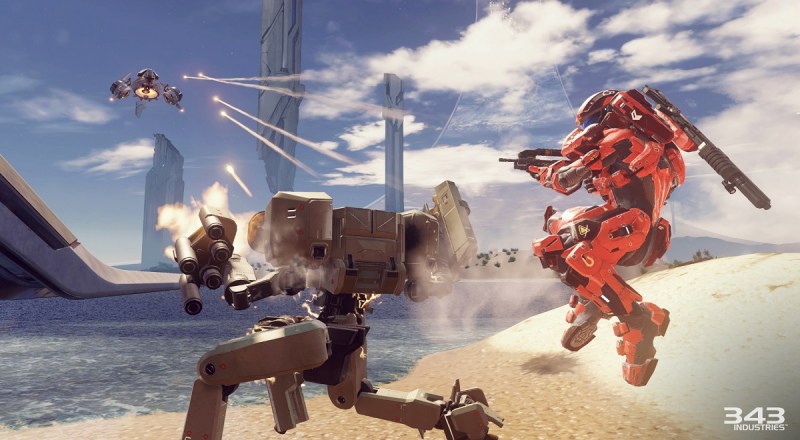 Above: Combat on a Warzone map in Halo 5: Guardians multiplayer.

I had a chance to play Warzone hands-on at a recent Microsoft event. Warzone is a technological marvel, as it taps Microsoft’s centralized data centers for more processing power. That enables a bigger world, more artificial intelligence enemies, and a mixture of both player-versus-environment and player-versus-player combat in the same match. This kind of massive battle is only possible because your Xbox One taps the processing power of the Microsoft computing cloud.

It turns out to be quite fun. And during hands-on sessions, I actually showed some improvement from one match to the next. I used my Requisition points, which I won during combat, to get better combat gear such as better weapons, shields, or vehicles. Those vehicles in particular, like a Scorpion Tank, made me much deadlier on the battlefield. So rather than get slaughtered, I was able to hold my own in some of the matches. Normally, I get eviscerated in multiplayer combat no matter what I do.

While the 4-versus-4 Arena mode is geared toward pro players and esports fans, Warzone is for the rest of us. 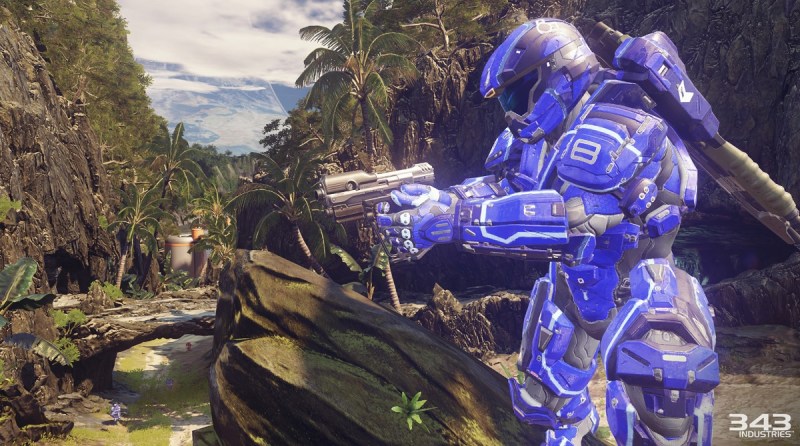 Warzone brings together 24 players, 12 on the red team and 12 on blue, all fighting each other in one big multiplayer map. On top of that, there are a bunch of artificial-intelligence controlled Prometheans and Covenant forces that get in your way. If you’re on the red team, you can slaughter the A.I. characters, but the blue team may take all of the territorial objects and turn on you. So Warzone gets to be pretty complicated. You’ve never seen so many Spartans in one place at once.

Each map is big enough to have multiple bases. To take over a base, your team has to eliminate the A.I. characters guarding it. Then you have to hold that base by having only your soldiers occupying it for a period of time. Once you take the base, you gain points toward a total goal of 1,000 points. The first team to get there wins.

Each base has a Requisition stations. You can visit the station and spend some of the points that you earn in combat. You can quickly requisition items such as weapons, protection, and vehicles. The better the item, the more it costs.

Meanwhile, the enemy A.I. shows up with reinforcements to take the bases back. The battles that I fought were pitched affairs. We won or lost bases several times, and the enemy showed up to cause a lot of havoc. You never know how a Warzone battle is going to turn out.

Microsoft plans to ship the game with six Warzone maps. 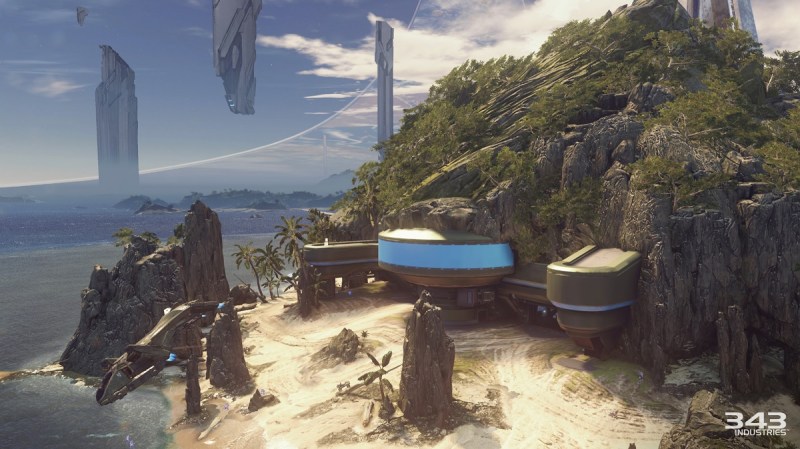 Above: Warzone map Raid on Apex 7 in Halo 5: Guardians multiplayer.

This map features a giant spire in the center of an island. Your team gets dropped at a base, where you have to clear out the Covenant, redeem points, and then move into the action against the rival Spartans. You can move through open ground to take bases on the sides and then rush the center spire.

Meanwhile, the Covenant A.I. fighters will counterattack and try to retake their territory. The map is a spiritual successor to Halo: Combat Evolved’s The Silent Cartographer level. Friendly A.I. units will also drop in if you keep the battle going in your favor.

It’s not an easy map for large vehicles or for running around as infantry. There are plenty of places for the infantry to ambush big tanks or for snipers to take out infantry from a distance. That makes it pretty well balanced.

In this map, the Blue team and the Red team square off against each other again. Each team is dropped off at a main base. They have to eliminate the Covenant and Promethean forces at neighboring bases, and then take on the opposing Spartans.

You can approach the different bases from various directions, making defense of any given based hard. 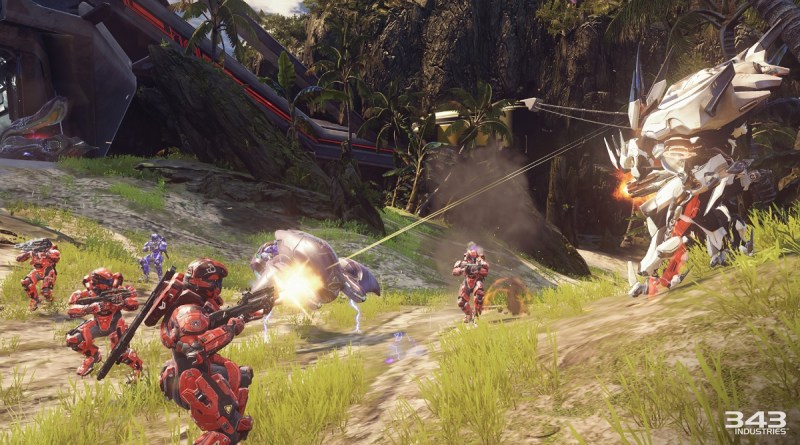 Above: A big firefight in Warzone map on Halo 5: Guardians multiplayer.

At first, I was lost. I had to land on the ground and shoot at the Covenant and secure our home base. It was hard to figure out where to go to find the action. If we had a vocal leader on the team, we could have coordinated much better. But we didn’t.

The Requisition system was actually key to helping me do better. For a while, I was requisitioning Ghosts, or speeders that levitate above the ground and can be driven around like motorcycles. They’re lightly armed, but you can run over rivals with them. But I kept getting killed or hijacked. And I was using up all of my points on the Ghosts. No matter what I did, I kept on getting killed and reborn.

So I became more patient. I saved up after I killed off some rivals. And I finally started earning big vehicles such as Scorpion Tanks. Those tanks even the score pretty good. Some of the best players were suddenly going down before my tank blasts. By bringing a tank to a gunfight, I was able to even the odds. As an infantry soldier, I was also able to spend on a rocket launcher to deal some grief to the enemy.

I found that cooperation was lacking. I couldn’t even get someone to jump into a two-soldier vehicle, the Warthog, which has, at least, a driver and a gunner. There’s a new trick you can use. If you hit the “jump” button, you can immediately move from the driver’s seat to the gun in one quick move. So that helps. But it doesn’t make you feel that you’re part of a larger team. So my worry is that Warzone could wind up being a chaotic mess.

It starts to feel a bit like a big Battlefield multiplayer melee. I hope that 343 Industries pays careful attention to balancing each map. 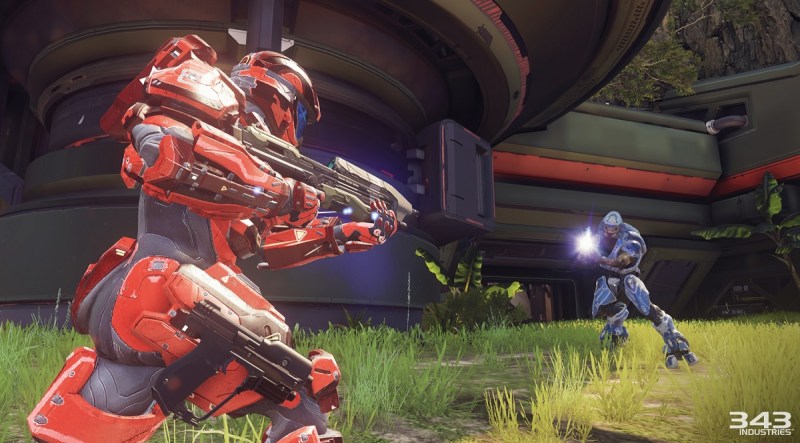 Above: Red vs. Blue again in Warzone map on Halo 5: Guardians multiplayer.

Josh Holmes, executive producer of Halo 5: Guardians at 343 Industries, described the goal of Warzone in an interview with GamesBeat.

“On the Warzone side, we’ve tried to bring all the best parts of Halo into one colossal mode,” he said. “It’s multiplayer at a scale that’s never been done before in Halo — the size of the maps, the number of players, dozens of AI integrated into the mode. You have AI bosses coming in. The scoring system is very different. You have all these choices as a player. Do I want to try and support my team by taking down bosses? Do I want to go capture bases and score that way, maybe even get a shot at taking out the core in the enemy home base? Or do I just want to contribute by shooting opposing players and whittling them down? There are all these different ways you can contribute in that mode. It never plays the same way twice.”

Warzone creates a lot of flexibility for you in terms of paths of attack, the types of weapons or vehicles you acquire, and the types of enemies that you go after. That makes for a very complex battle, but also endless variety. And that means that hardcore Halo fans are never going to get bored with Warzone.