The Skylanders are back, and this time they’re tearing up land, sea, and sky in supercharged vehicles. And yes, this is as fun as it sounds.

Skylanders Superchargers, out now on PlayStation 4, Xbox One, Wii U, PlayStation 3, and Xbox 360, is the fifth entry in the annual series that really kicked off the multibillion dollar toys-to-life genre back in 2011. This time around, developer Vicarious Visions returns to the helm and offers up some much-needed diversity and innovation to the franchise. I played the Xbox One version for this review.

Superchargers features a new portal (which plugs into the USB port on your console), which seems to have more room to accommodate two figures and a vehicle at the same time. As per the Skylander titles that came before, you place the well-crafted toys on the portal, and they come to life inside the game, usually following a flashy, animated intro. When one character loses all of its health, you just remove it from the portal and replace it with another until you either beat the level or you run out of Skylanders and have to restart at a checkpoint.

Although the last installment, Trap Team, gave you the ability to trap enemies and unleash them later for limited periods of time, the gameplay really didn’t diverge much from the previous Skylanders games. Thankfully, Superchargers features many new levels and modes of play that diverge from board after board of “run around, search for hidden things, and mash buttons until the monsters die” that you saw previously.

The addition of vehicles really helps keep Skylanders from getting a bit stale this time around. Even among the parts that require transportation, you can find a lot of diversity. Some are just racing on rails and destroying enemies. Others, such as the demolition-derby-style Rideocalypse, feature battle arenas replete with environmental hazards and enemies bent on smashing your car to bits. Some are even free-roaming areas where you use your vehicle to solve puzzles. And, if that wasn’t enough to get you interested, several of the boss battles take place behind the wheel (or flight stick).

In addition to the fun added by the various modes of transportation, the stages where you roam around on foot see a huge leap in variety this time around. You’ll encounter old-school 2D platforming, areas where the direction of gravity and your perspective shift as you traverse different portals, and even one part that plays out like a side-scrolling shoot ’em up. Add in special abilities that your Skylander will get in certain places like a ray that alternately shrinks or grows objects (try using it on enemies too) or magical powers of attraction and repulsion that make for some interesting puzzles, and Superchargers ensures you’re never doing the same thing for too long. 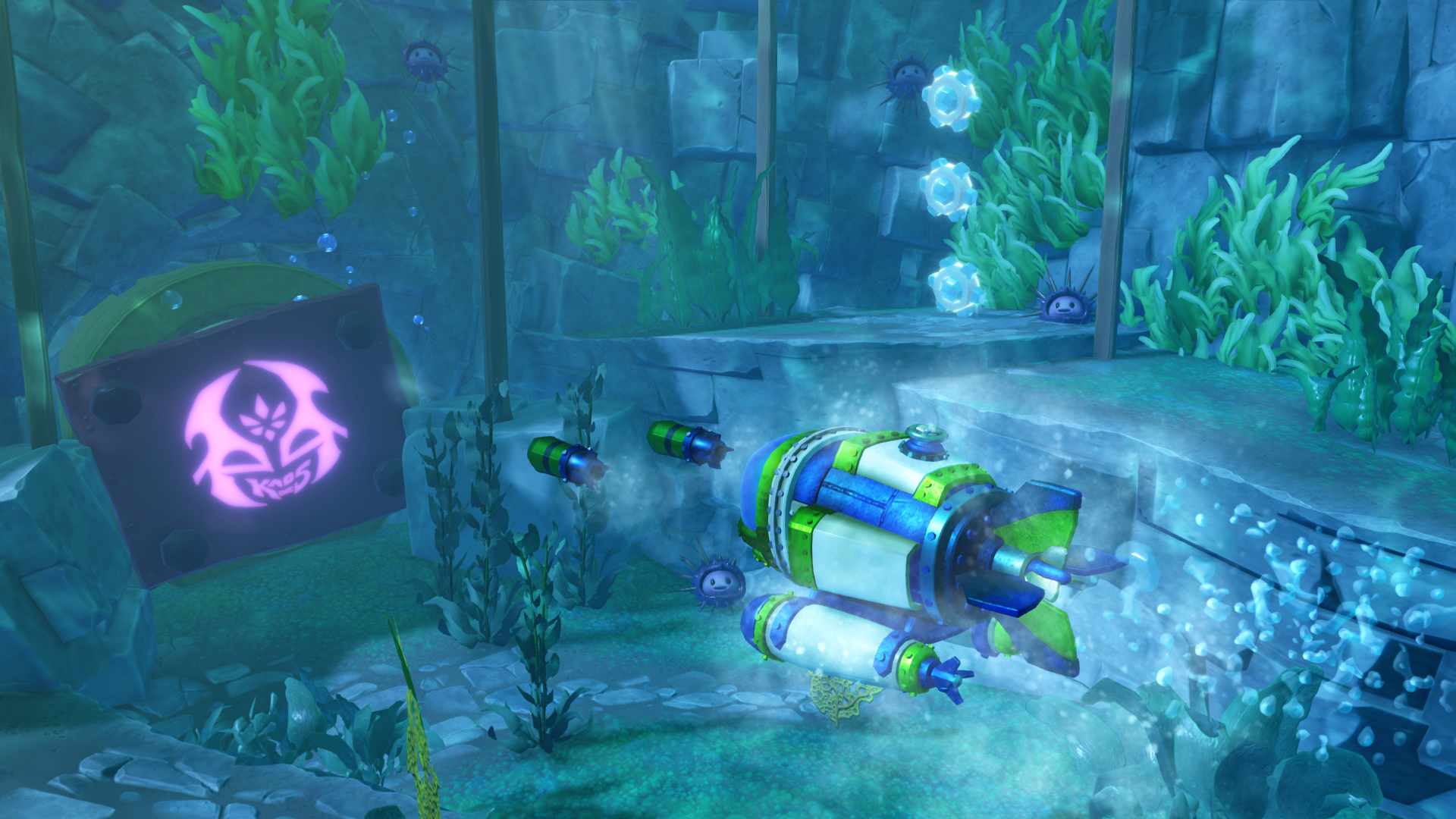 Above: The sea vehicles can even travel underwater.

Even after you finish the main storyline, Skylanders Superchargers encourages continued play. The number of options on the racing portion alone rival full-featured racing titles like Mario Kart (and you get even more content if you buy the Racing Action Pack add-ons). The Academy, which serves as your base of operations throughout the story, becomes a perpetual quest hub afterward. Here, you can engage in a game of Skystones (a simple collectible card game), place and play with the Legendary Treasures you’ve gathered, take on arena battles and other challenges, and receive daily quests from many of the game’s non-player characters.

Superchargers gives you many more reasons to come back than all of its predecessors, and this is certainly a good thing.

The quality and detail of the toys has always been one of the strengths of the Skylanders series, and the latest batch certainly doesn’t disappoint. One of my favorite pairings among the new characters was Fiesta (an undead mariachi with a trumpet gun and a Mexican Day of the Dead skull for a head) and his vehicle Crypt Crusher (a coffin-styled, three-wheeled car).

The addition of the vehicles also brings a new level of interactivity to the toys as many of them now have moving parts. The wheeled vehicles, in particular, are much more fun for little hands to play with, as you can actually roll them across the floor and engage in your own offline races.

Special Sidebar: What about the Wii and 3DS versions?

You may have seen mention of Nintendo Wii and Nintendo 3DS editions of Skylanders Superchargers on various Web sites, but I purposely left them out of the list of versions above and below. Why? Well, the Wii and 3DS versions, while they include some nifty Nintendo-exclusive characters that can also function as Amiibo figures, only include the racing features of the game. They do not include the main storyline gameplay and a lot of the additional challenges. This was apparently unclear on several different retail websites during the preorder process and has led to many angry parents, upset kids, and negative reviews.

I really think Activision is skirting a dangerous line here by making the packaging for these versions almost visually identical, aside from different characters and the addition of the smaller subtitle “Racing” underneath the main logo. These products are also the same price as the fully featured versions, which is also questionable in my mind. So please, be careful when you go purchase Skylanders Superchargers. If you have a system other than Wii or 3DS, you’re better off buying a different version. 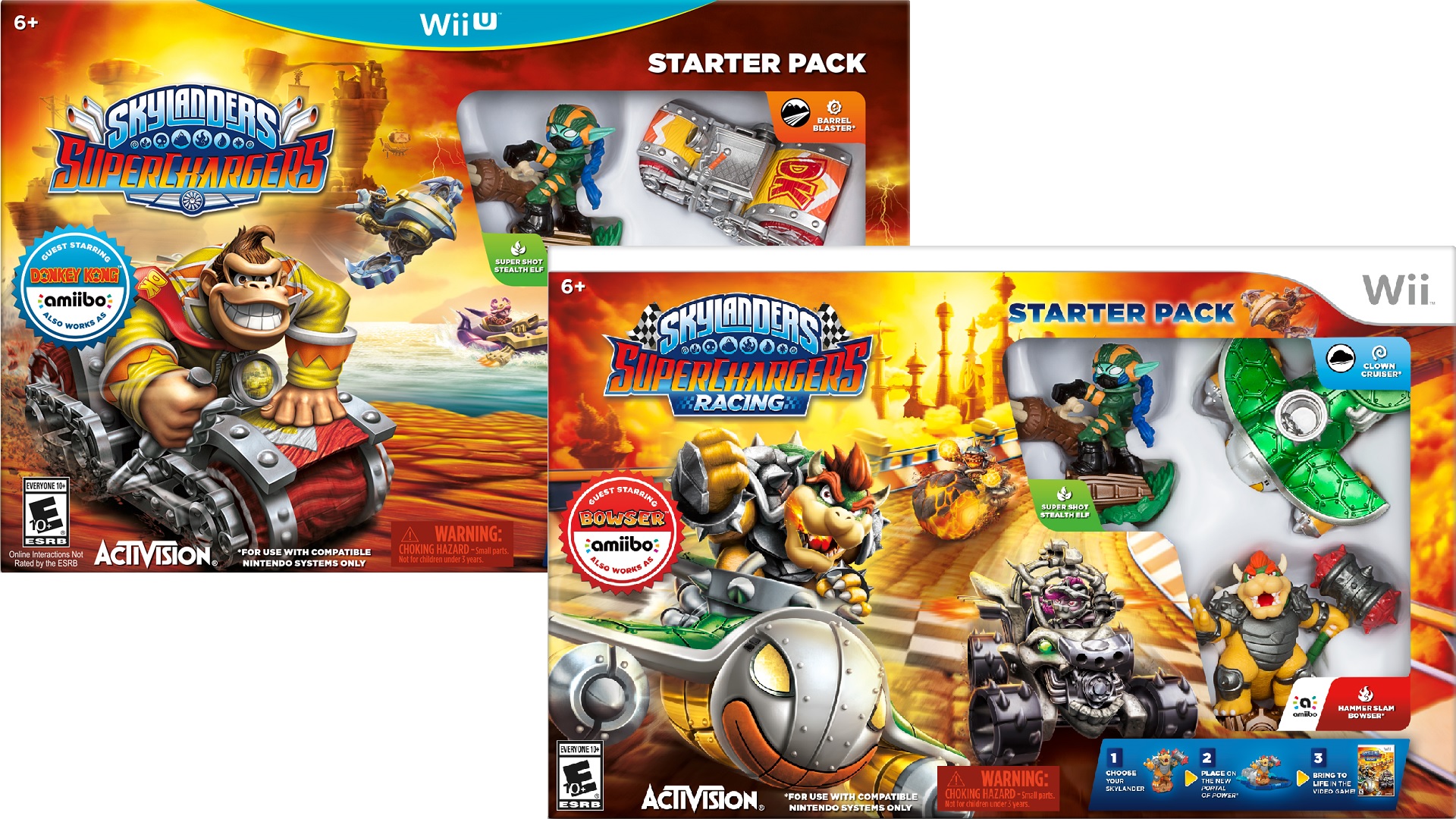 Above: At a glance, these two appear similar. Unfortunately, the Wii version only includes the racing portion of the game. Buyer beware.