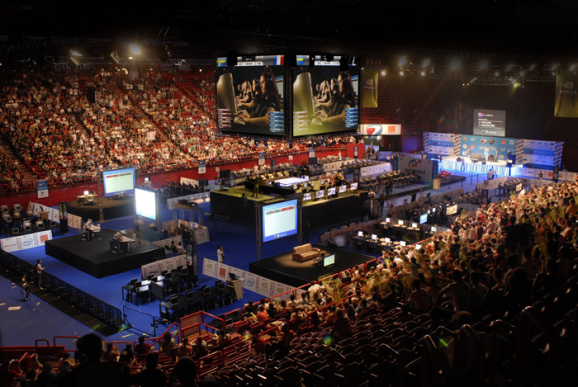 Esports is big, but it could grow a whole lot larger.

Correction: We originally said that each esports fan is worth $2.40 per month — that is actually the amount they are worth annually.

The esports industry is hot, but it has a long way to go before it’s as strong as traditional sports.

The average esports fan is worth about $2.40 per year in terms of revenue to the competitive-gaming industry, according to market-research firm Newzoo. That’s up from an estimated $2.22 from earlier this year, and Newzoo expects that figure could grow to $4.63 by 2018 if the total market maintains a conservative growth pattern. This represents a sector that is on pace to nearly double in just a handful of years, but this growth still puts esports far behind an established sport like basketball, which Newzoo points out is worth $14 annually per fan worldwide — and if you only look at National Basketball Association, that number grows to $19.

But Newzoo sees a path for esports to get to that next level, and it has laid out a number of factors it says the industry will need to focus on to do so.

A variety of genres

One of the first things that pro gaming will need to do (and is already doing) is to expand the kinds of games that find an audience.

“The vast majority of esports titles are PC games that fall into a few major genres,” reads the Newzoo post. “With multiplayer online arena battlers [MOBAs] like League of Legends, Smite, Heroes of the Storm, and Dota 2 being some of the most popular in terms of participation. However, with their complex gameplay, MOBA games can be difficult for viewers who don’t play them to understand and for gamers to master.”

This has left a space open for other types of games like shooters, fighters, and even mobile games to fill, and that has started to happen. Counter-Strike: Global Offensive is a military-style shooter that is popular around the world and commands viewership numbers that match even League of Legends.

Newzoo points out that tournaments for the biggest mobile game Clash of Clans have started to gain momentum, and publisher Activision has announced a league for Call of Duty.

Even so, Newzoo points out that non-MOBAs will face a tough market.

“There’s a reason MOBAs are currently the respected top dog in esports; many MOBA players see the genre as requiring not only skill but a higher level of strategy and team play than, say, shooter, sports or mobile games,” reads the Newzoo report.

Worldwide leagues that have local reach

While gaming tournaments have found great success on a global scale, they are less popular when you look at the regional level. Newzoo points out that only League of Legends is set up with several regional leagues that feed into a global tournament. This is opposed to traditional sports that are almost always tied to cities, states, and countries.

Newzoo explains why this particular concept may pose a real problem for gaming.

“Local esport tournaments require support from both local sponsors and sports associations to succeed,” reads the report. “While on a global level, esports has received a lot of attention from mainstream media, locally, many tournament organizers still struggle to find parties willing to participate in setting up events. Publishers will have to play a role in connecting local esports activities with the larger regional and global championships.”

Esports is already on its way to generating $465 million in revenue by 2017, and that number could balloon even faster now that daily-fantasy companies like FanDuel and DraftKings are involved. But with that influx of cash also comes the potential for corruption.

“With multimillion dollar prize pools now at stake, and increasing amounts of money being bet on the outcome of these games, new rules and regulations are needed to combat cheating and match fixing,” reads the Newzoo report.

ESL, one of the world’s largest esports organizers, has already implemented a drug-testing policy. And Unikrn, a pro-gaming wagering company, tracks data to try to ensure that players aren’t throwing matches. But none of these things are universal yet — and even when they exist, they aren’t perfect.

“Regulatory structures have not always been able to keep up with the explosive growth of esports,” reads the Newzoo post. “An incidence with performance-enhancing drugs was inevitable, but how will organizers handle drug testing going forward? Meanwhile, esports is a nonconformist world that may find it difficult to accept strict regulations and authority.”

Settling the ownership of media rights

The media right for the National Football League earn that organization billions of dollars each year. That’s because Fox, CBS, and ESPN have to pay a serious amount of cash for the rights to air those games. Esports, however, has not valued its media rights in the same way.

“Thus far, content rights have not really been a focus for publishers, as fan-generated content has served as free advertising for their games,” reads Newzoo’s post. “As direct esports revenues grow, this may change.”

But the intelligence firm points out that it’s unclear how this will work, but it also recognizes that media rights are a secondary concern for developers and publishers for a reason.

“Nobody owns a sport like baseball or football,” reads the report. “The fact that companies like Riot Games own the game that is played makes esports a more complex ecosystem. In the traditional media space, media rights are sold country-by-country, maximizing local and global revenues. For esports, this structure may not be possible for many reasons.”

Finally, Newzoo says that esports needs to align its digital and traditional media strategies. Yes, League of Legends, Dota 2, and Counter-Strike: Global Offensive are all enormous on Twitch and other video sites. But they have little-to-no presence on the potentially more lucrative mediums like television — although that is starting to change.

TBS will air Counter-Strike: Global Offensive matches on Fridays for 20 weeks in 2016, and ESPN has already covered Heroes of the Storm and Dota 2. Hell, SportsCenter even talked a bit about the Evo fighting-game tournament.