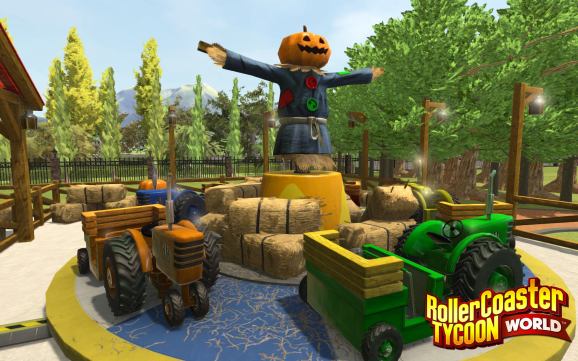 Today it’s official: RollerCoaster Tycoon World is coming out December 10th, come hell or high water (or a really bad reaction in the upcoming Betas). Today the pre-order showed up on Steam for the expected $49.99. More notably, you can snag a 23% off discount after coupon at Green Man Gaming. The same coupon applies to the Deluxe and Ultimate Editions of the game, with all versions getting you into the upcoming closed Betas.

At Checkout, Use Coupon: 23PERC-AUTUMN-SAVING

The RollerCoaster Tycoon World Beta dates are not yet known, but we do know one will launch in late October with the second launching in late November. At least this gets you a chance to play before launch and to give any feedback that could be helpful for the official release. The cheapest way to get in is GMG no matter which version you pick.

In addition to Beta access, pre-ordering gets you five Skins that will be available at launch.

All editions come with the same pre-order bonuses, which are the two Beta weekend accesses plus five Skins. Furthermore, the Deluxe Edition will get you:

As if the bonuses in the Deluxe Edition weren’t enough, there’s an even more bulky edition you can buy, but it’s more for those looking to get into the series. Basically you get the Deluxe Edition of RollerCoaster Tycoon World plus all the previous games and DLC packs in the series: