Twitter is taking a big evolutionary step beyond its microblogging roots today as the company revealed it’s expanding its in-tweet Buy button to a range of big retailers. 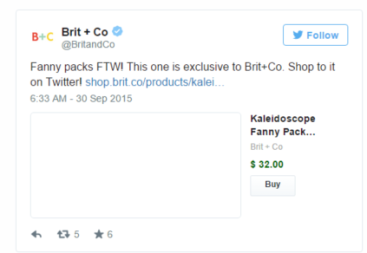 The Buy button first reared its head on mobile 12 months ago, and Twitter has been steadily iterating on the feature since then. It has hitherto only been available to smaller online retailers such as Fancy, Gumroad, and Musictoday, but today sees the company team up with Bigcommerce, Demandware, and Shopify to help merchants on their respective ecommerce platforms include Buy buttons in their tweets.

Mobile is a growing focus for e-tailers, which is why payments processor Stripe announced a new API method called Relay earlier this month, aiming to improve the way merchants and consumers transact on their mobile devices. And it’s this that is powering other new merchants such as Best Buy, PacSun, and Adidas, as they look to shorten the path from a consumer seeing a product-related tweet to making a purchase.

The Buy button is restricted to U.S. merchants for now, but today’s partnership announcement is likely just the beginning in Twitter’s journey towards becoming a full-fledged ecommerce enabler.