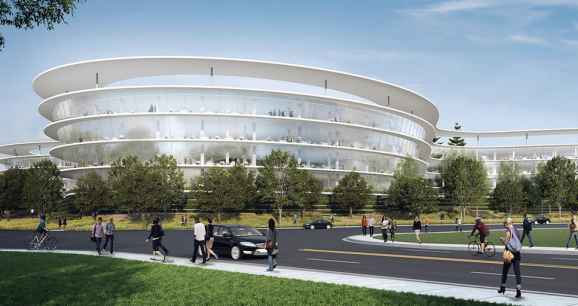 Apple has made an agreement to lease a large piece of real estate in Sunnyvale, California, on which it plans to construct a second “spaceship” office building. And if recent reports about the scale of Apple’s electric car business are correct, the new space might be needed, and soon.

Apple plans to use the space to build a curvy 777,000-square-foot office building that can hold 3,000 employees, reports the Silicon Valley Business Journal, citing sources with knowledge of the situation. The planned structure has its own website, called, fittingly, Notanotherbox.com.

Apple has reportedly green-lit its mammoth project to build an electric car, and hopes to have a new vehicle on the road by 2019, according to a Wall Street Journal report earlier this week. The report also said Apple approved tripling the 600 employees already working on the project, in order to speed up production.

Analysts are already beginning to factor in potential profits from Apple’s car business.

“While sales are likely to begin later than 2019, we believe investors are starting to try to factor the Apple car into the model,” wrote Piper Jaffray analyst Gene Munster in a note to investors Thursday. “To put the car in perspective, every 40,000 units at a $75K ASP would add 1% to 2021 revenue.”

Apple has been building outward from its Cupertino home. In recent months the company has spent $300 million on nearly 70 acres in Sunnyvale, Santa Clara, and San Jose.