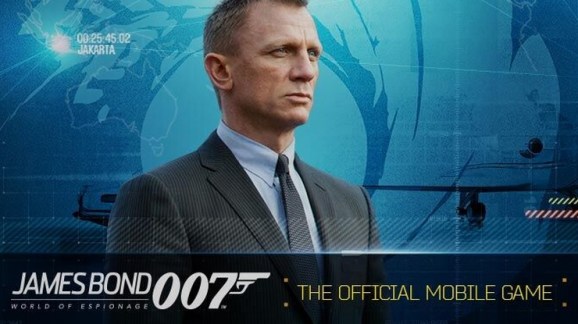 007 has a new game in James Bond: World of Espionage.

There have been 11 James Bond actors in the history of super spy 007 across dozesn of films. And there have been 26 video games and five mobile titles based on the suave British secret agent.

And now Glu Mobile is doing something completely different with the mobile strategy title James Bond: World of Espionage. Instead of a Pierce Brosnan-style shoot-em-up, this game takes into account the thinking and serious nature of current Bond actor Daniel Craig, said Niccolo De Masi, the chief executive of Glu, in an interview with GamesBeat.

The title is a new twist for Glu, which is now best known as the maker of the celebrity role-playing game Kim Kardashian: Hollywood. And it’s another example of how brands and celebrity licences are making a big impact in the mobile-gaming business. De Masi, who is speaking at our GamesBeat 2015 conference on October 12-13, likes to mix it up with a portfolio of different kinds of games and genres.

Glu pondered World of Espionage for a few years, and it has been in active production for the past two years in partnership with Eon Productions (the owner of the Bond franchise for the past 50 years) and MGM Interactive.

“This has been quite an extensive collaboration,” De Masi said. “This is a fairly hardcore strategy game, where a lot of the money is being made in mobile.”

The title is not an action shooter. It’s a narrative-based, strategy role-playing game that immerses players in the Bond universe of strategy and intelligence. Players assume the role of Commander of their very own intelligence agency, and they work to take on the coveted role of M, or the head of the British MI6 headquarters in London.

The game has the likenesses of more than 100 real-world actors and models as agents and villains. It uses a photorealistic art style, and De Masi said it’s the first high-profile strategy game to use that approach. Players try to create their own MI6 faction by finding, recruitihg, and developing top agents with unique talents. You can level them up through training to increase their skills and combine them with other agents on the team to take advantage of each agent’s abilities.

You travel around the globe completing missions with a few taps on the touch screen. Confrontations are resolved quickly, without a lot of animation or video scenes. It’s sort of like a text adventure with a lot of vivid still graphics. You can provide agents with advanced gear that increase their stats, such as gadgets, vehicles, clothes, and weapons. And you can find new items and materials and use them to craft special gear in the Q-Lab for better bonuses.

In multiplayer, you can battle against other agencies for supremacy in Alliance Wars. But in contrast to shooter games, you can play World of Espionage with one hand, tapping your thumb or fingers on the screen. The game has an energy mechanic, where you need to have a certain amount of energy in order to keep doing missions.

James Bond games went through a cycle of huge popularity, particularly with Rare’s Golden Eye 007 for the Nintendo 64 in 1997. But after a long run of frequent games, players got tired of them. With the introduction of actor Daniel Craig in Casino Royale in 2006, the franchise has changed for the better.

“It’s a strategy game that is the right direction for the intellectual property,” De Masi said. “Eon reinvents the Bond franchise every few years. The Daniel Craig version has become more serious and cerebral. It’s more about ethical decision-making, and it’s not tongue-and-cheek at all.”

De Masi noted that strategy games account for a lot of the top 20 games on the app stores and that this kind of game is the right direction for the “long haul.” He said, “It’s more about being a real-world spy than punching someone in the face.”

In World of Espionage, you have to make choices such as whether to exterminate someone or hold them captive. This kind of play can be equally appealing for women or men, De Masi said.

“You can decide to use violence or other techniques,” he said.

Glu plans to do frequent weekly and even daily updates for the online-only game, which is effectively like a massively multiplayer online game, he said. The title will get a lot of marketing juice from the latest Bond film, Spectre, which comes out on November 6.

“We had this longstanding collaboration with the franchise owner to think of where it is going,” De Masi said. “We are taking the game in lock step with where the movies are going. I think the fan base is evolving. I realize it might take time for this demographic to catch on. But I think we’ll win this in the long haul. We aren’t in it for this quarter, but for the next few years.”