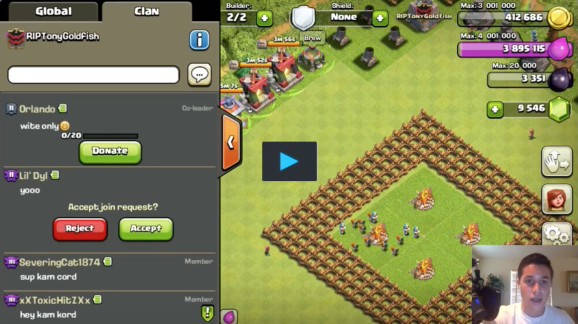 A top Clash of Clans player livestreaming on Kamcord.

As YouTube Gaming works to put a dent into Twitch’s lead in the game-livestreaming space, a smaller startup is building up momentum with a focus on the huge audience of mobile gamers.

Kamcord, the company that provides gamers with a destination for mobile videos and livestreams, is seeing a major uptick in use since it introduced broadcasting features earlier this year. In just the last two months, the top eight Kamcord partners alone have racked up over 200,000 followers on the site. The platform’s top stream so far, a two-hour Boom Beach session (it’s a strategy game), had 192,000 unique viewers. And as those numbers continue to grow and surprise Kamcord, the company is looking ahead to areas like esports to reach an even larger and more engaged audience.

“We got featured as a ‘best new app’ on the Apple App Store, and we were featured on the Google Play Store last week,” Kamcord cofounder Aditya Rathnam told GamesBeat. “That led to a lot of users coming into our app.”

These high-profile placements on the iOS and Android markets gave Kamcord a serious boost, but it’s also seeing installs come from word-of-mouth from developers, broadcasters, and viewers. The aforementioned Boom Beach stream, for example, was so huge partly because developer Supercell (the folks behind Clash of Clans, one of the top grossing mobile games around) promoted the event on its social-media accounts. And once Kamcord does acquire a new viewer, it typically hooks them for extended periods of time.

“In general, users are amazingly engaged,” said Rathnam. “They spend 18.5 minutes a day on average on Kamcord. We’re really happy with that.”

While that number might look small compared to Twitch’s average of 1.5-hours viewed a day for its audience members, 18.5 minutes a day is huge for a mobile apps. In Q4 2014, people only spent an average of 1.4 minutes in any one app, according to intelligence firm Nielsen.

And Kamcord has some smart ways of encouraging people to stick around and interact with broadcasts. First, it has a live chat similar to the competition, but, second, the app also features a Periscope-style “hearting” system. This enables viewers to hit the heart button on a stream as much as they want.

“One of the things that we added, which we thought was minor, was a heart count,” said Rathnam. “It shows you in real time how many hearts a stream has, and this has become a huge rallying cry for streamers and viewers. Streamers will say they want to get to 10,000 hearts as soon as possible.”

Kamcord has even seen two streamers do battle to see how fast they can get to 1 million hearts. One Clash of Clans player reached that milestone in just 34 minutes.

But it’s not just social tools that Kamcord is using to attract a larger, engaged audience. The company is also investing heavily in esports.

“Mobile esports is obviously a space that people have talked a lot about,” said Rathnam. “We’re starting with some early steps, and we’ve got some more grandiose stuff planned as well.”

Kamcord has already partnered with publisher Gameloft to help it run a tournament for its multiplayer online arena battler Heroes of Order and Chaos. Every weekend for the next month, Gameloft will broadcast matches live on Kamcord. It’s not a huge competition, and the winners only get in-game currency and an iPad — which isn’t exactly on par with the millions of dollars organizations are offering in the PC esports scene.

But it’s a start.

Rathnam will speak more about the mobile esports scene later this month at the GamesBeat Conferene.