An Academy faction city in Might & Magic: Heroes VII.

When a good series runs into serious trouble, the results feel especially ugly.

Might & Magic: Heroes VII offers the worst game yet in a venerable turn-based strategy franchise. Not only does the game itself disappoint, but it’s painful to watch the hopes of long-time fans turn into the realization that they played the best installments of Might & Magic long ago.

The games have knocked around in one form or another for two decades, passing from developer to developer. I reviewed the original DOS version of Heroes of Might and Magic: A Strategic Quest in 1995, and my love of turn-based and real-time fantasy-themed strategy has only grown since.

But I will admit that if another version of Might & Magic: Heroes ever hits the streets, I will not volunteer to review it.

Might & Magic: Heroes VII is available now for Windows PCs via Steam and Uplay for $50 from developer Limbic Entertainment and publisher Ubisoft. I tested it using a Windows 10 PC that far outstripped the recommended configuration. 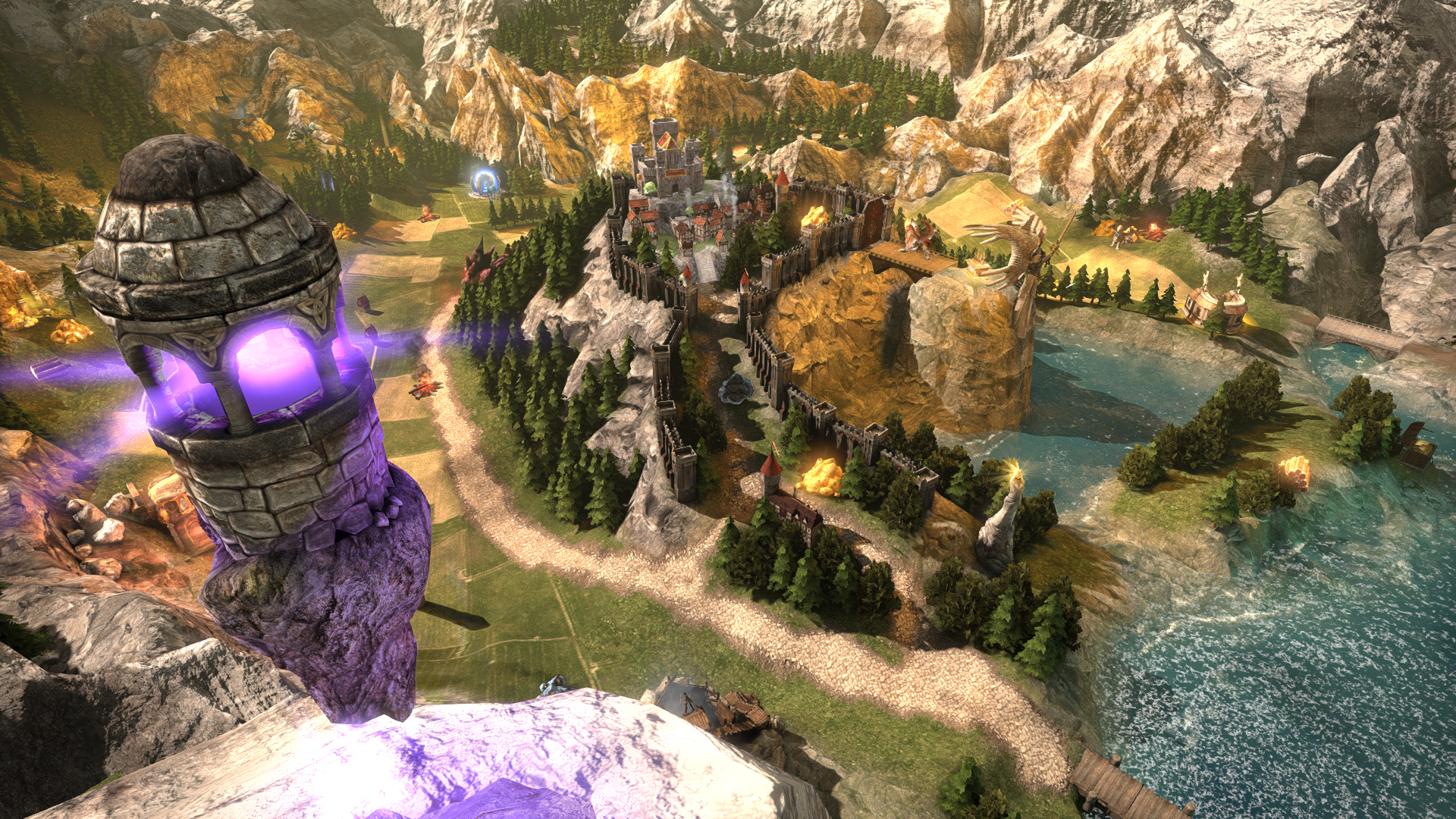 Above: A castle in the Haven faction campaign, one of six you can play through.

The length of the campaign

You follow the exploits of Ivan Griffin, who considers a nearly impossible battle as he listens to his advisers. They are seated around the council table, representing the game’s six factions, and each one offers to tell him a story, illuminating a different type of strategy or battle outcome.

These “stories” become what you play out in the campaign mode. While each of the half-dozen tales offer only a few long missions, the result is a campaign that takes dozens of hours to complete — which you then follow up with Griffin’s own battles.

I found this approach pleasant, especially because you could pick and choose which story you wanted to play through next. The end result is well over 50 hours of gameplay. Above: More details on one of your heroes, including gear, stats, armies and, on another tab, spells.

Might & Magic: Heroes VII combines a bit of light city management with venturing heroes, who amass resources and collect additional armies of different units to tackle your foes.

A skill wheel gives you choices of buffs to your units’ exploration, diplomacy, and power. Heroes can attack enemies directly or boost the power of their armies using spells. You can recruit more heroes as you go, creating a small pack of armies roaming the countryside.

It gives you a satisfying number of buttons to push here and plenty of things to collect in the countryside. They combine to provide a pleasant feeling of depth, though you may not always use all of these parts for any real purpose.

Heroes VII offers a fun duel mode, allowing you to leap immediately into battle (no resource-gathering required) with maximum power and abilities versus a similarly equipped A.I. foe. This may have been my favorite part of the game: Good matches were frenetic and fun, and playing with high-level units and spells from the start was a good insight into how things would go later.

I would have liked to battle other players in these, but I ran into technical issues (more on that later.) Above: An area from a Necro campaign. Each faction offers different graphics, units, and abilities.

Factions that feel truly different from one another

The six varied factions you can play offer their own units, maps, and abilities. Their stories wind differently through extremely varied landscapes.

One minute you’re playing the light-themed Haven, with hero spells that can simultaneously heal or hurt; the next, the player-chosen semi-evil Dungeon faction, with its slippery Dark Elves. It gives the mechanics a fresh take each time you swap.

Granted, some basic abilities — especially the reliance on melee bashing from some Might-oriented units — remain the same from faction to faction in Might & Magic: Heroes VII. But the graphic look and feel of the armies change, sometimes dramatically, and the different maps also offer a varied appeal, though with fewer changes in gameplay. Above: Heroes are your key units in M&M — until they disappear on you.

More bugs than a June picnic in the Everglades

I consider myself fairly forgiving of the occasional glitch, especially in PC games, where the next bug-fixing patch typically hovers just over the horizon. But the huge number of issues that cropped up — especially those that players appeared to have reported weeks or months before — felt incredibly sloppy.

It would crash on launch. Sometimes it would crash during play. Sometimes my heroes would disappear. Sometimes menus wouldn’t accept a choice until I closed and opened several times in succession. Graphical bugs were less common, but I encountered plenty of oddities. And I’ll get to multiplayer in a minute.

Full disclosure here: As I said, I ran the game on Windows 10, and the requirements for Might & Magic: Heroes VII fairly clearly call for Windows 7/8.1. I followed all steps listed in the launch-day blog (including the day-one patch) to eradicate as many issues as I could before writing this review.

That said, Windows 10 launched as a free update for owners of those Windows versions back in July. It’s not exactly reasonable to assume that your player base won’t have taken advantage of that upgrade, and it’s not like the developer didn’t have time to do at least some Win10 quality assurance: I’ve been running stable builds of the OS since early this year.

And many of the bugs I encountered had been previously reported by players using the recommended Windows variants. As of last night, 24 hours after release, about 20 significant “known issues” remained on Ubisoft’s sticky forum thread on the topic for all users. Many had been reported by players significantly in advance of release. 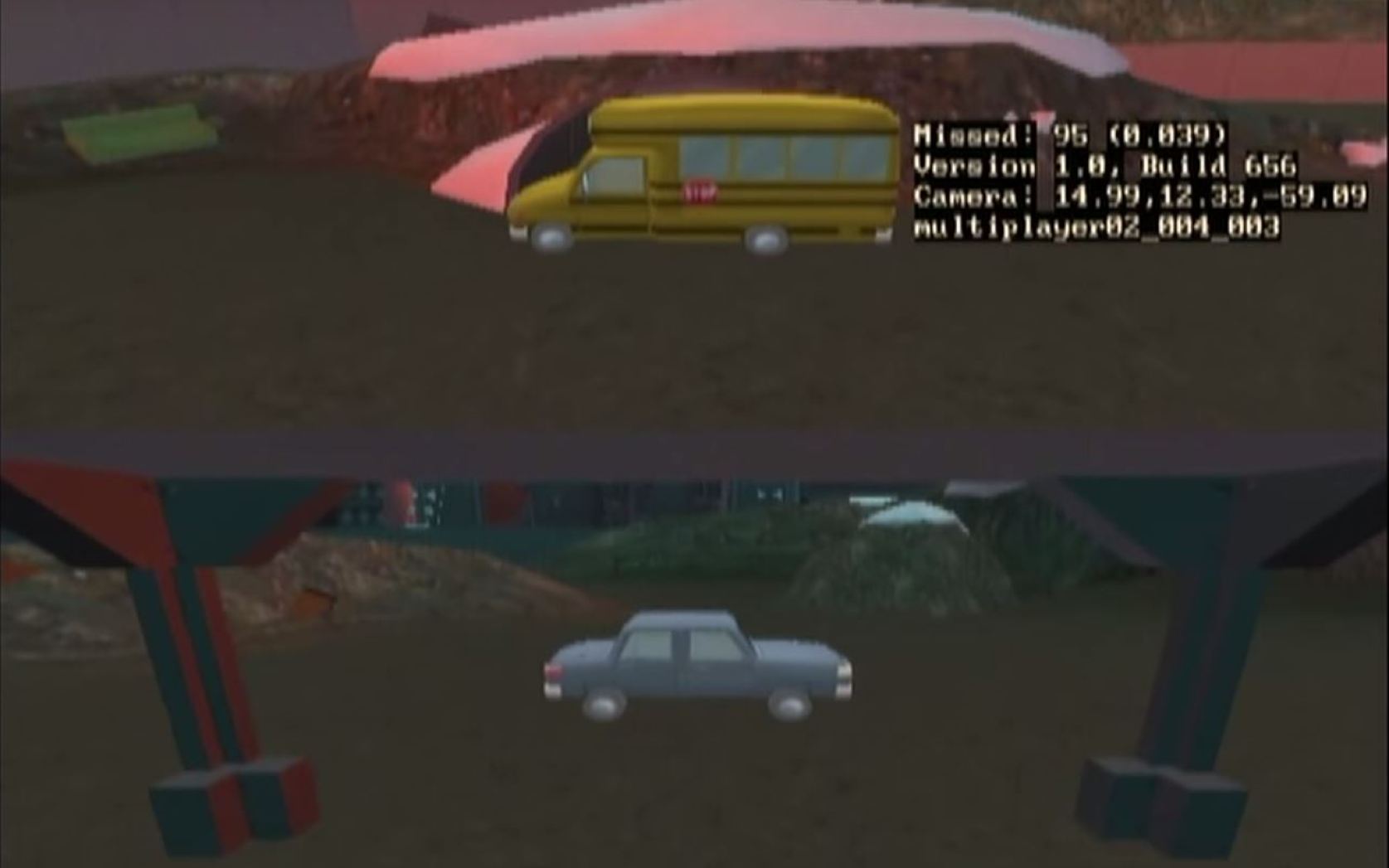 Above: Curse you, teasing multiplayer screen. I’ll never be able to play through one of those matches.

This is a corollary on the bugs issue, but it’s an important one: I was unable to play a single multiplayer game through to completion versus Internet opponents. (I didn’t get a chance to test LAN play.) It would crash, or my army would fail to load, or combat would simply stop working properly for me or for my opponent.

That’s a shame, because I was looking forward to trying out some of these mechanics out against actual humans. Typically, live-person play offers the drawback that some overpowered units become the “only” choices for successful fights. Unfortunately, this version of M&M makes that the case even against the A.I., so I wouldn’t have been giving anything up for more-intelligent opponents. 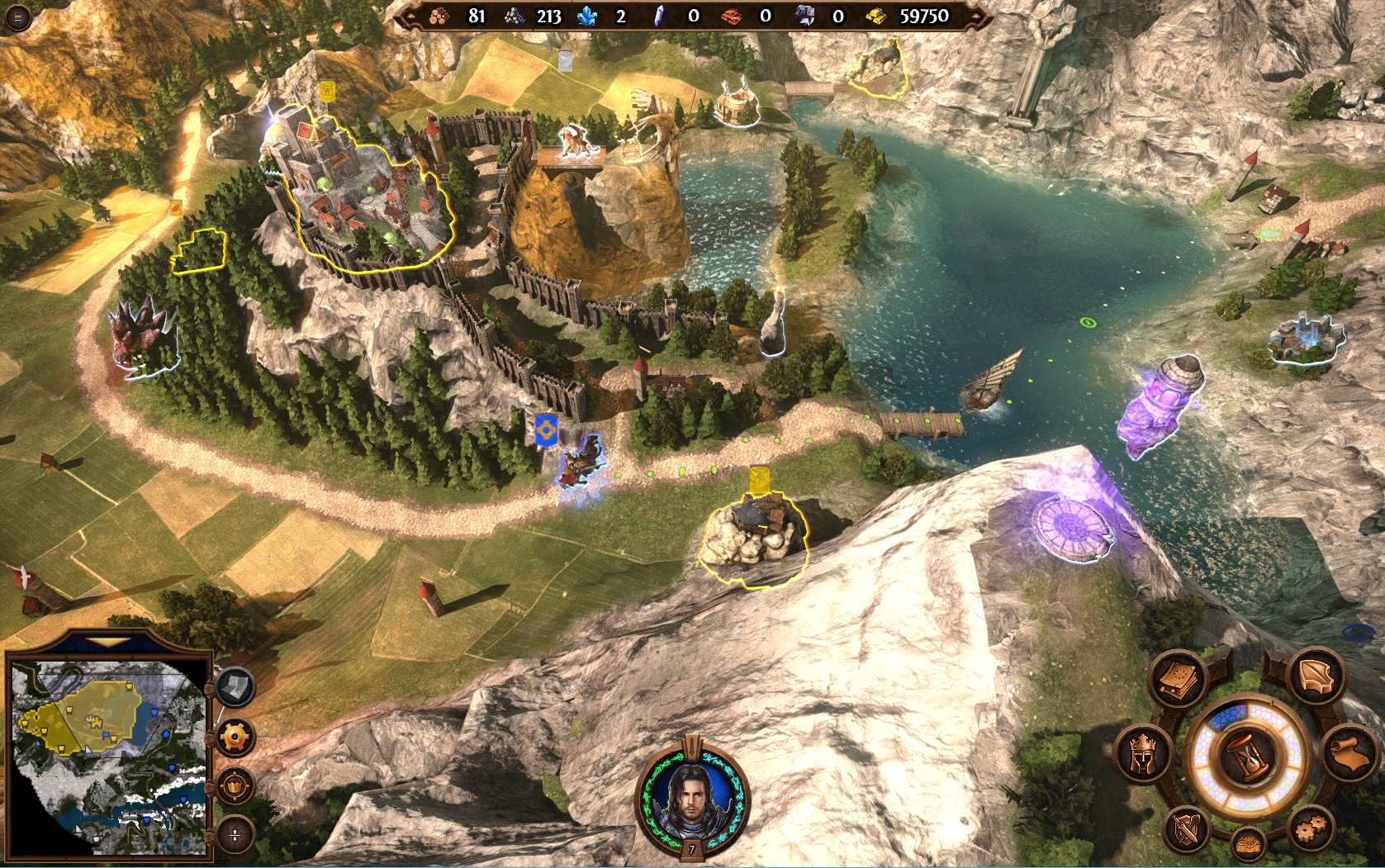 Above: The green and white dots represent the path M&M suggests for this hero’s journey. Unfortunately, it may take me 47 clicks to complete it.

Moving around the map is absolutely painful. One moment a click to set a path, then another to make my hero move, worked perfectly. We’d sail to the end of their movement abilities and the end of the turn.

The next, I would end up gritting my teeth and madly double-clicking to make my hero move two paces at a time down a clearly marked path the game showed me it already knew how to run.

Combat was sometimes the same. Auto-resolution typically played out poorly (no fair, game A.I., if you’re going to play badly, both teams should), so I ended up having to manually battle through nearly every one of my conflicts that weren’t wildly imbalanced.

Those battles went fine, but some abilities just took far too long to animate or complete, making the contests drag on. 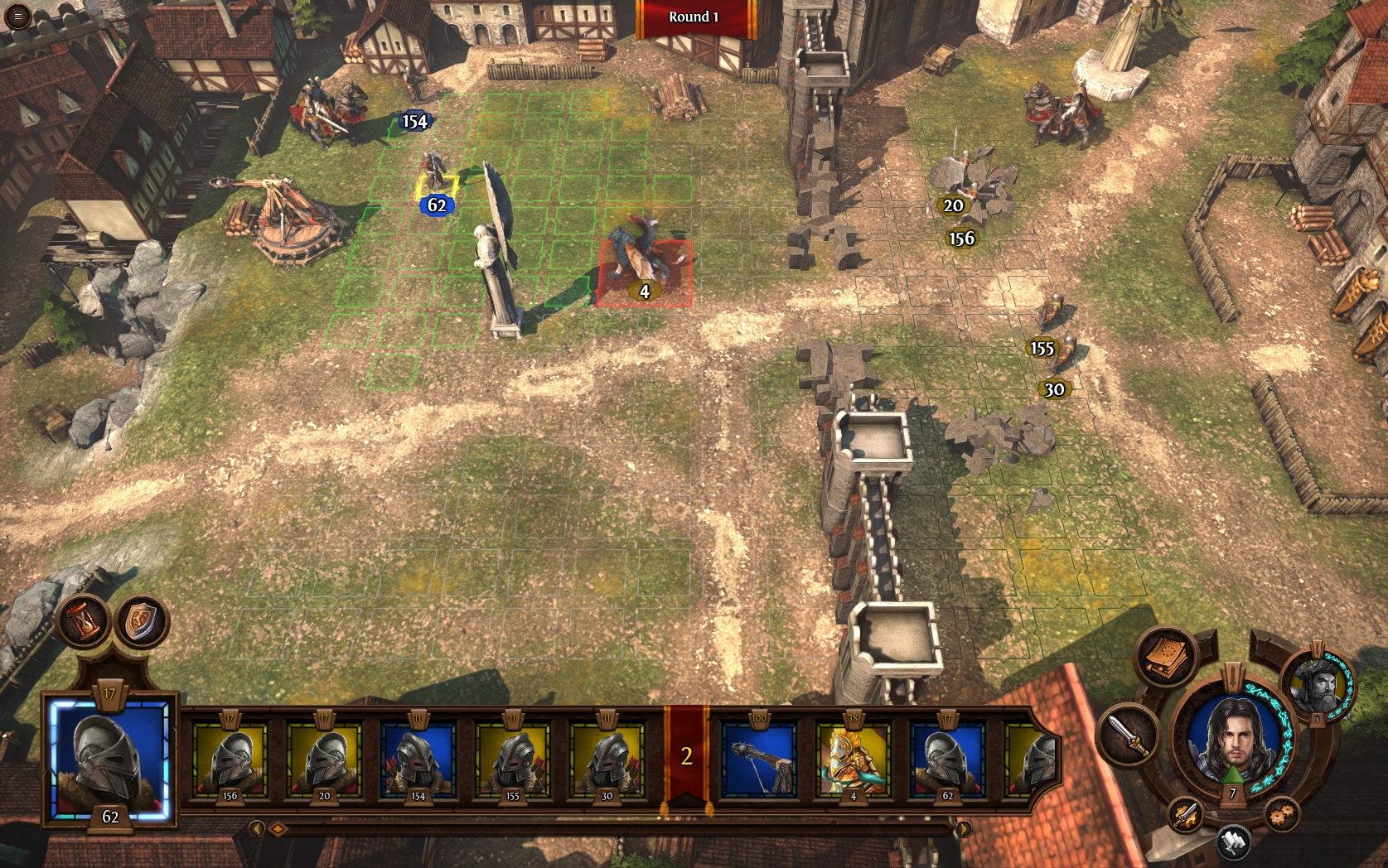 Above: This battle isn’t going to play out well. But in anything less challenging, those piles of archers would be more than a match for most evildoers.

I mentioned earlier that M&M offers many dials to tweak and buttons to push in building, recruiting, and fighting with your armies. But realistically, you can often ignore almost all of them.

A single hero, adventuring through the countryside with no “built” units whatsoever and just collecting whatever army members he happens upon, could handle anything but the worst town sieges on normal difficulty in Might & Magic: Heroes VII.

A few overpowered spells and abilities usually dominated a battle, and big stacks of underpowered allies frequently performed as well as those expensive, hard-to-produce advanced units.

M&M: Heroes VII offers you the ability to tweak many of your automated opponents’ settings, in terms of how fast they build up, expand, or become aggressive. I typically didn’t touch them — and didn’t need to in order to succeed with simple combinations. 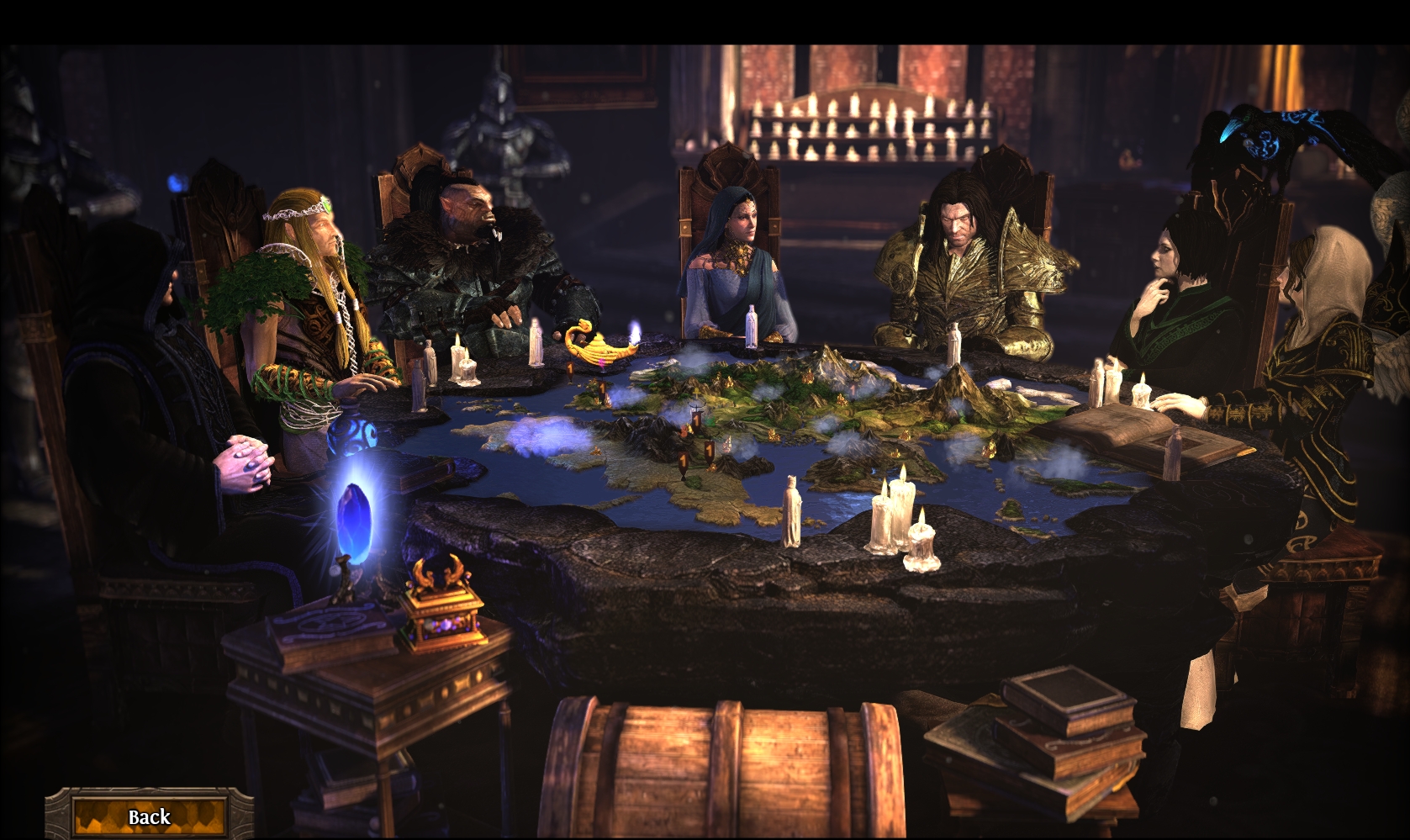 Above: Ivan and his advisers. They appear just as animated in this screenshot as they are in the video.

The full-screen cutscenes, whether procedurally generated as part of battles or in the stories told by Ivan’s advisers in the campaign, proved incredibly disappointing. They frankly look atrocious: clunky, ugly, reminiscent of games released a decade or more ago.

People are drawn as frozen statues, with little detail. None of the voice acting in campaign cutscenes animates at all; instead, the advisers are left frozen, mouths hanging open, as the game camera pans over them.

The tiny combat animations of your units typically look fine, if sometimes slow. But the chessboard-like battlefields they play on sometimes oddly de-rez, making the game board appear a bit rough.

If this were a tiny indie title, perhaps I could forgive the faults due to lack of financial backing. But the latest installment in one of the premiere fantasy-strategy series ever published, released by the world’s third-largest independent publishing house? Come on. Above: This Heropedia tells you more about the back stories of your champions, but doesn’t do much to instruct you on how to use them.

No hand-holding for beginners

I was grateful to have some previous experience with this series. Normally I grumble a bit at tutorials — especially the mandatory kind — that lead you through every last menu item and option. And please, for all that is holy, never voice act them.

For a game with this many choices, however, I can only imagine how a beginner to turn-based strategy would have figured out when and how to end a turn, or cast a hero spell, or choose an ability. As far as I could tell, this M&M offers no in-game tutorials of any kind. Above: A landscape in the Stronghold campaign.

I honestly looked forward to playing Might & Magic: Heroes VII, and the storytelling approach to the campaign felt promising. The varied factions, abilities, resources, and maps appealed to me, and when it wasn’t crashing or making my heroes go poof, the game had some of that “just one more turn” fun.

But over time, M&M managed to suck out every bit of my enthusiasm, until finally it felt like a dull trudge to finish up so I could play something else.

Some of the bugs I experienced — but not all — likely sprung from my play on Windows 10. But even if I had never run into a single technical difficulty, this title would not earn a rave review — it would have earned an additional 25 points for the final score.

Too many factors weigh down the gameplay, too much depth appeared to be there for the sake of providing “options” that weren’t, and frankly, it just wasn’t that fun.

If you’re looking for a lighthearted turn-based fantasy-themed strategy, I recommend you take a gander at Stardock’s solid Sorcerer King — also not perfect, but a darn sight better-implemented and more entertaining than M&M.

If you just want great turn-based strategy and don’t care about the fantasy setting, consider Civilization: Beyond Earth.

As much as I respect this series, I cannot recommend that you purchase Might & Magic: Heroes VII.

Might & Magic: Heroes VII is available now for PC. The publisher provided GamesBeat with a download code for purposes of this review.