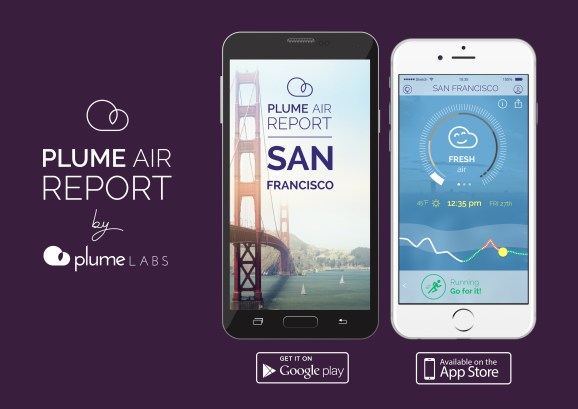 It would be harder to find buzzier buzzwords these days than “Big Data” and “Smart Cities” and “Open Government.”

As more things get connected to the Internet, it creates the tantalizing potential to generate information that could help governments make cities more efficient, healthier, and safe.

However, that potential has been slow to translate into things that actually have an impact on people’s day-to-day lives.

The startup has just launched its first product: the Plume Air Report, available on iOS and Android. The app pulls together pollution data from monitoring stations that governments have installed around the world to give you real-time information on pollution levels in your neighborhood.

Plume was started by Romain Lacombe, an influential advocate in France for the adoption of open data by governments.

Before launching Plume, Lacombe had been in Silicon Valley for a stretch, and then worked for the World Bank. From 2011 to 2014, he helped lead Etalab, the French government’s task force for developing open access to information.

With Plume, Lacombe is now trying to put many of those principles into practice.

Plume taps into 150 monitoring stations around the world. While some governments have ways for citizens to see some of that info, Plume provides all of it in real-time. And more importantly, using the analytical tools built by the company, it gives distinct advice such as whether or not it is safe to go outside, and for how long before it will affect your health.

“Pollution is a health issue as much as environmental issue,” Lacombe said. “Living in Paris shortens your life by six months. Which is just crazy when you think about it.”

Plume already made a splash earlier this year. The company was running a pilot test of its service when it detected a surge in air pollution that, for a stretch, made Paris the dirtiest city on the planet. The information was passed along to the government, which took steps to limit cars on the road.

Now that Plume has launched, Lacombe hopes that information will help users on a regular basis in much the same way: By giving them practical information on which they can take action.

“If you have information, you can adapt your behavior and live a healthier life,” he said.

The company got a nice start, being featured by Apple in the Best New Apps category. And Lacombe continues to push his open government and environmental agenda by holding events such as the Urban Tech vs. Pollution event (in London on Oct. 15) to demonstrate ways data-driven startups can improve life in cities.

On the business side, Lacombe notes that aggregating all that pollution information is a valuable service. And developing more predictive models, as well as some hardware, are all strategies under consideration.

While still small, the company has raised some seed money from French banking institutions. Raising its first round of venture capital is still somewhere on the horizon.

Now that the app is live, Lacombe said he and his team have global ambitions.

“We’re a French company,” he said. “But everyone on the team has an international positioning from the get go.”