Over the past couple of decades, Israel has developed a strong fintech ecosystem thanks to continued overseas interest, a local commitment to innovation, and a community that’s dedicated to addressing the emerging needs of this industry.

The Israeli fintech industry continues to grow so impressively that it is attracting more and more entrepreneurs and increased funding from global investors. Take, for example, companies like FundBox, which raised $90 million in two rounds, Payoneer, which attracted a similar amount, and eToro, which raised $40 million, all in the past year.

In addition to the long list of successful fintech companies that have gone public or been acquired by leading players, many more Israeli startups are addressing emerging fintech sectors including payments; trading and investing; lending and financing; cryptocurrency; customer engagement; personal financial planning; anti-fraud; banking and insurance; and more. For us at Carmel, fintech has been an important focus since the fund’s inception, and we have recently created this map outlining Israel’s fintech landscape. 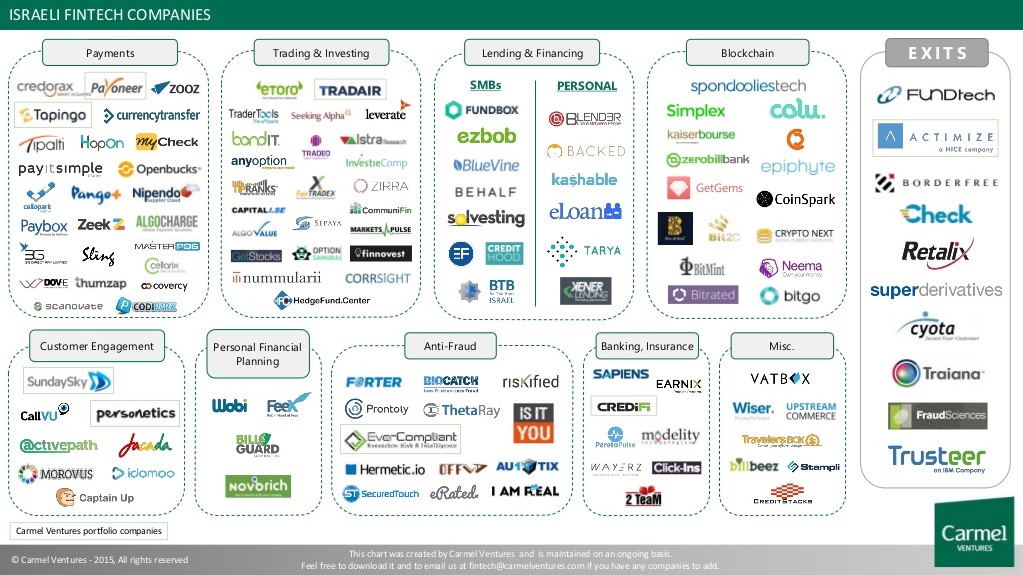 Why is Israel at the forefront of finteech Innovation?

1. It has mastered the relevant technologies. Israel has a great deal of fundamental experience and knowledge in technologies that are becoming increasingly relevant to the modern world of fintech, which is more personalized, consumer-friendly, and mobile, and aims to reach populations that aren’t able to get adequate financial services. Such technologies include expertise in real-time analytics, algorithmics, big data, risk management, anti-fraud, and security.

Israeli entrepreneurs also know how to apply online consumer-facing marketing knowledge, developed for sectors like gaming and adtech, coupled with sophisticated risk scoring algorithms to address the growing demand of P2P and SMB lending, with companies like eLoan, Blender, FundBox, eZbob, BlueVine, and Behalf that have attracted significant amounts of funding recently.

2. It has a legacy of successes. Israeli fintech companies that have become leaders in their respective fields, such as Actimize in the area of fraud prevention, FundTech in the area of transaction banking solutions, Retalix in the area of point-of-sale, Trusteer in the area of cybercrime prevention, and Sapiens in the area of insurance. As a result, the local startup ecosystem has massive amounts of knowledge regarding the global fintech industry, its requirements, and its business practices. Those successful fintech companies grow and nurture entrepreneurs and executives, giving them a great deal of go-to-market expertise. The ecosystem also benefits from a growing group of “second-time” entrepreneurs who have already built a successful company in the past and are now onto their second fintech venture. For example:

These are just a few examples of the strong representation in Israel of highly experienced people who know what it takes to sell “fintech grade” solutions to the financial services world and to build leading companies in this sector.

3. It has learned the ropes from key global financial centers. There are thousands of Israelis working in the global financial services industry mainly on Wall Street and in London, both on the technological and business fronts, many of whom return to Israel with deep understanding and knowledge. This adds yet another element of sophistication to our home-grown talent.

4. Global financial institutions have a presence here. Many global leaders of financial institutions understand that there is a great deal of innovation here in Israel that is relevant to them, and as a result, have either already created a presence here or are keen to create one in the form of R&D centers and accelerators. For example, Barclays and Citi have very large development centers in Israel, and Visa has recently announced its “Visa Europe Collab.” Also, some of the leading players in the financial market such as SunGard, PayPal, Intuit, and RSA have growing R&D centers here in Israel.

5. Global institutions are also investing here. There are visits by delegations almost on a weekly basis from the world’s leading financial institutions that are eager to tap Israeli technology. Some of these institutions also invest in Israeli fintech. For example PingAn (a leading private Chinese financial services conglomerate) has invested both in Carmel and in Payoneer (a Carmel Ventures portfolio company) and eToro; Santander Ventures has invested in MyCheck. There are many others that regularly come to explore and scout for potential investments.

6. Israeli financial institutions (both banks and credit card companies) have always been open to innovation. They constitute great ‘beta sites’ for local innovation, and many of them have beefed up their investments, now boasting highly professional innovation divisions of their own. Some of them are also involved with accelerators. For example, Bank Leumi joined forces with startup investment fund Elevator, and Bank Hapoalim joined the Microsoft Ventures Accelerator.

All of this has led to a dramatic rise in investments in Israeli fintech companies. Last year, Israeli investment in fintech represented 12 percent of total investments. By addressing the needs of both developed and emerging markets, Israeli fintech will only continue to grow.

Avi Zeevi is a cofounder of Viola Group and a cofounder of Carmel Ventures. He serves as a General Partner at Carmel and leads Carmel’s FinTech investments