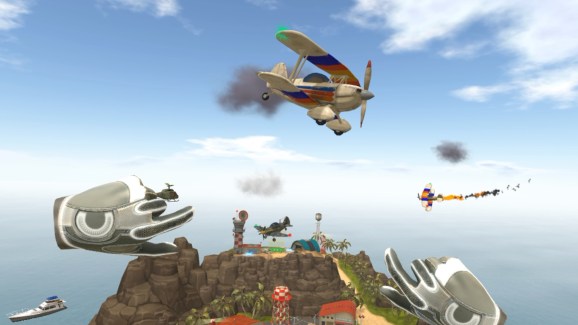 Final Approach was one of my favorite games from the conference.

Virtual reality games can be so much more than just shooters.

While that’s the most obvious choice (especially with games set in space), the exciting thing about the early days of VR technology is that people are still figuring out what kind of experiences work well. Everyone’s experimenting, and we won’t know what’s a hit until consumers get their hands on VR headsets like the Oculus Rift, PlayStation VR, and HTC’s Vive next year.

That’s why I love attending events like the recent Oculus Connect conference. I get to see a wide variety of games from studios from all around the world. As Epic Games chief executive Tim Sweeney said during an interview, VR is still very young, so we won’t be seeing triple-A games with huge budgets and teams anytime soon. But the projects that developers have been showing over the last few months offer a glimpse of where VR games could go.

With that in mind, here are three of my favorite games from Oculus Connect. All of them tackle genres that I’ve never seen before in VR. 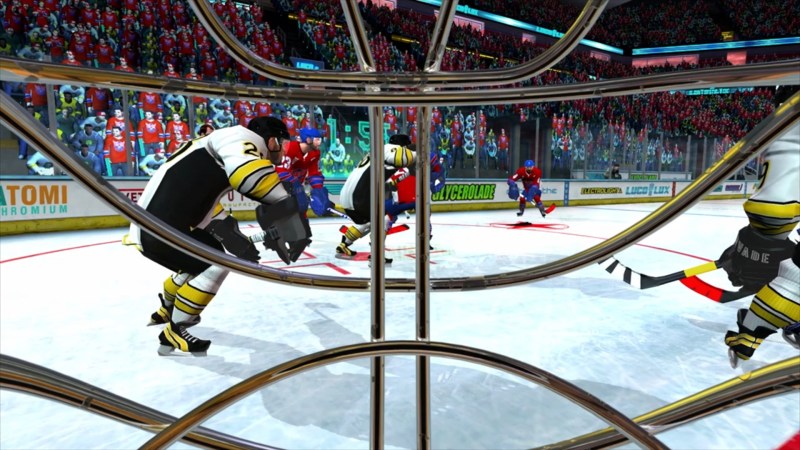 Above: Playing as a goalie in VR Sports Challenge.

When I played football in high school, I was a third-string defensive end. I didn’t have the arm strength or the football knowledge to lead the team as a quarterback, nor the speed and height needed to make touchdown catches as a wide receiver. But with Oculus Rift exclusive VR Sports Challenge, I can rewrite history and pretend I’m playing on a professional level.

Unlike traditional sports games like Madden NFL and the NBA 2K series, VR Sports Challenge puts you in an athlete’s shoes by using a first-person view. It covers four different sports: hockey, football, basketball, and baseball. Instead of having VR Sports Challenge span the length of a normal game (like all four quarters in a football match), developer Sanzaru Games created shorter but exciting situations for each sport that anyone can jump into.

When I was playing as the goalie in a hockey demo, a computer-controlled teammate came up to the net, asked if I was all right, and tried to pump me up for the game. Once the match started, I had to constantly look left and right to follow the puck. You have to keep it within your eyesight; you’ll know it’s there when the color around the puck turns green. When someone attempts to shoot a goal, you can block it by using an Xbox controller’s left or right bumper buttons. It’s a little tricky at first, but I got the hang of it after a few minutes.

If your team takes control of the puck and gets it close to the opposing goalie, VR Sports Challenge switches your perspective to the guy who’s about to score. When this happens, time slows down so you can use your thumb stick to aim your shot. It was a cool way to be a part of the match and experience that back-and-forth struggle without having the total control I’m used to in other sports games. 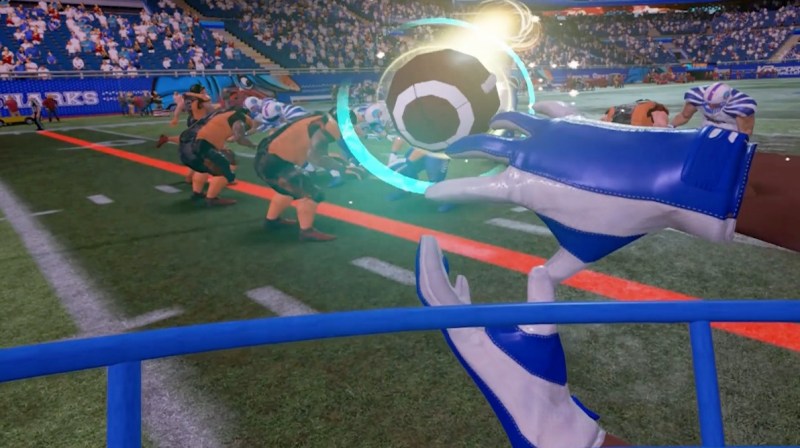 Above: You play as both the QB and the receiver.

VR Sports Challenge will also support the Oculus Touch motion controllers, which simulate your hands and fingers in VR. That’s the part that excites me the most when it comes to football. Sanzaru only started working with Touch prototypes a few weeks ago, so it wasn’t able to put a demo together in time for the conference. But when I was chatting with Sanzaru CEO and president Glen Egan, he told me a few more details about how the studio’s version of football works.

As the quarterback, you can select plays from your wristband and throw the ball to your receivers using the Touch controllers. When the ball is in the air, the perspective switches to the receiver. Like in the hockey demo, time slows down, and you have to put your hands up to reach for the football. Some plays will be more difficult to pull off than others, especially if you’re going for a desperate Hail Mary pass to the end zone.

Egan wasn’t ready to talk about the basketball and baseball modes just yet. He said the studio is still experimenting with Oculus Touch and finding out what kind of mechanics it should include. But if Sanzaru can nail the experience for these four sports, it has a chance of making the first great VR sports game before titans like Electronic Arts and 2K Games try to move in. 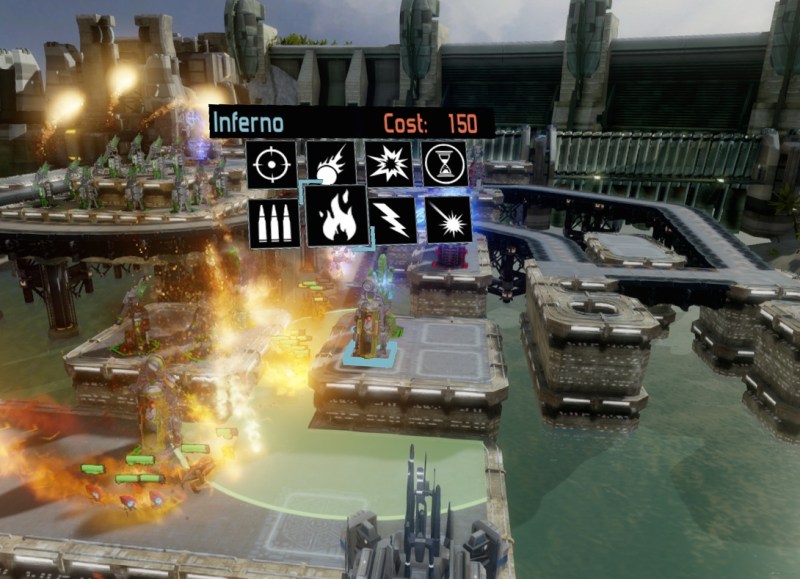 Above: You can lean around your base to see where the aliens are.

Tower defense doesn’t seem like a natural choice for VR, but playing Defense Grid 2: Enhanced VR Edition made me a believer. Though it’s an older game — Defense Grid 2 originally came out in 2014 for consoles and PC — developer Hidden Path Entertainment retouched the original’s 21 levels to make sure they look great upon closer scrutiny in VR. It also added five new levels exclusive to this version that expand on the story.

Defense Grid 2’s main gameplay is still the same. You play as a commander who must prevent aliens from stealing precious power cores by placing towers around a base. But in this version, your god’s-eye view of the world gets a considerable upgrade with the Rift. To build a tower, all you have to do is look at one of the little squares (a red dot on the screen helps you out) and press a button on the gamepad.

In the demo, the island level I was playing on felt like it was just floating in front of me. It was as if I was staring at a tabletop game with intricately detailed buildings and miniature figurines. But this world was actually alive.