The Dreamcast and I have a special connection when it comes to the shoot-’em ups.

My absolute favorite shooter is Takumi’s Mars Matrix, and the platform I first experienced it on was Sega’s thinking white box. The art direction has a specific, style, audio composition, and gameplay design of late ’90s shoot-’em-ups on the Dreamcast. There have been attempts on more modern platforms to capture that feeling, but the Dreamcast’s tight canvas seems to have really leant itself to these games.

Hucast Games appreciates the same flavoring that I am talking about. The development team seems to specialize in working on the antiquated Dreamcast hardware, and it has released a game for it in 2015, The Ghost Blade.

But do we have a legitimately great game shoot-’em-up here? Or is the project banking a little too hard on the respect from developing on a retro platform? I busted out my Dreamcast and rotated my CRT television set — so I can play vertical shooter at full screen — to find out. 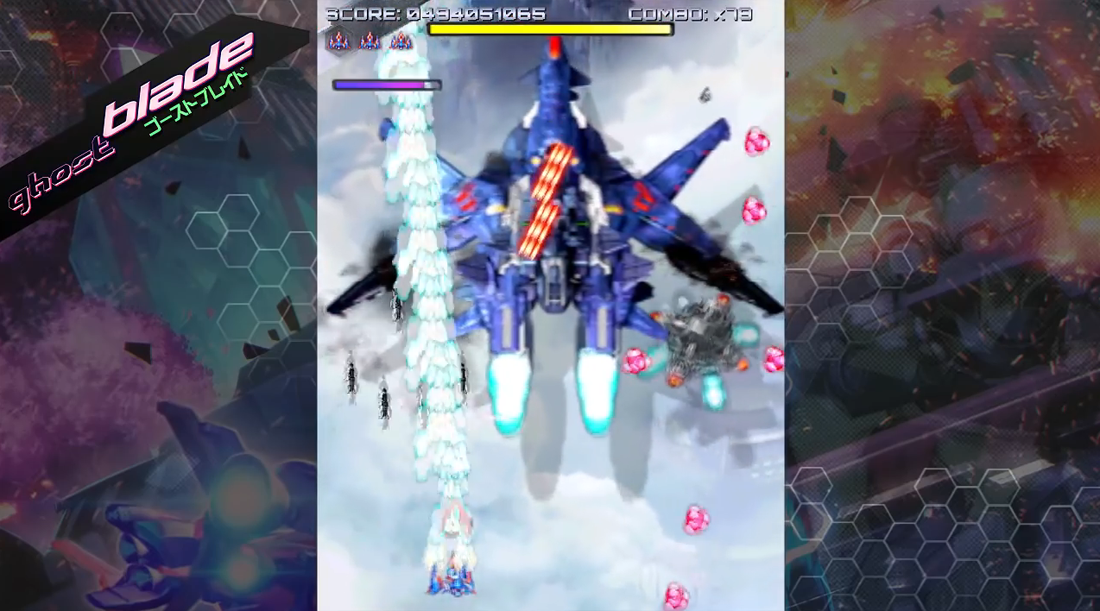 The Ghost Blade isn’t that complicated. You may play three ships, all piloted by sexualized space goddesses, which represent the three offensive firing styles often found in shooters: one ship has a wide yet weak bullet spread, the second ship has a more focused attack that delivers a lot of damage, with the third being an in-between of the first two (medium bullet spread, with moderate damage).

All ships have two firing modes: quick and narrow or slow and wide. The quick-and-narrow attacks make downing specific enemy targets easier, with the trade-off being that the ship moves slower and makes dead enemies generate meter building bubbles instead of gold stars. While the wide and slower do the opposite, allowing the ship to move quicker, with downed enemy craft spawning gold stars.

The trick here is that gold stars earn points, which is a pretty big part of shoot-’em up gameplay. Bubbles do not; instead, they build a meter that’s in the upper left of the UI. When that meter fills, a screen-clearing bomb appears in your inventory. So offensive decisions have to be made while facing different waves of enemies. Do I want better fire power or more points?

On top this is a combo counter, which isn’t terribly complicated. The more ships destroyed without taking a hit, the combo counter grows. It’s not implied, but I am under the impression that the combo counter also multiplies scores as you go, not at the end of a stage as a bonus.

Nothing here is complicated. This is both good and bad (which I’ll get to later). The good is that this makes The Ghost Blade a great pick-up-and-go game. If I want a shoot-’em up where I don’t want to overheat my brain, the The Ghost Blade system is comforting. The Ghost Blade’s length sticks at the genre’s sweet spot of about five levels, and it keeps a fairly traditional pace. In that the first two levels introduce most of the weaker to mid-range enemy types that will be found throughout the game. The third level introduces the more advanced concepts, leaving levels four and five open for the designers to go ape-shit and throw everything at the player.

The layout of enemy waves is thoughtful, setting up situations where proper decision making — between more concentrated fire or a wider spread — is required.

That’s really the key to most 2D action game design, knowing what the player can and can not do — and then challenging those abilities appropriately. With The Ghost Blade, Hucast definitely seems aware of this. 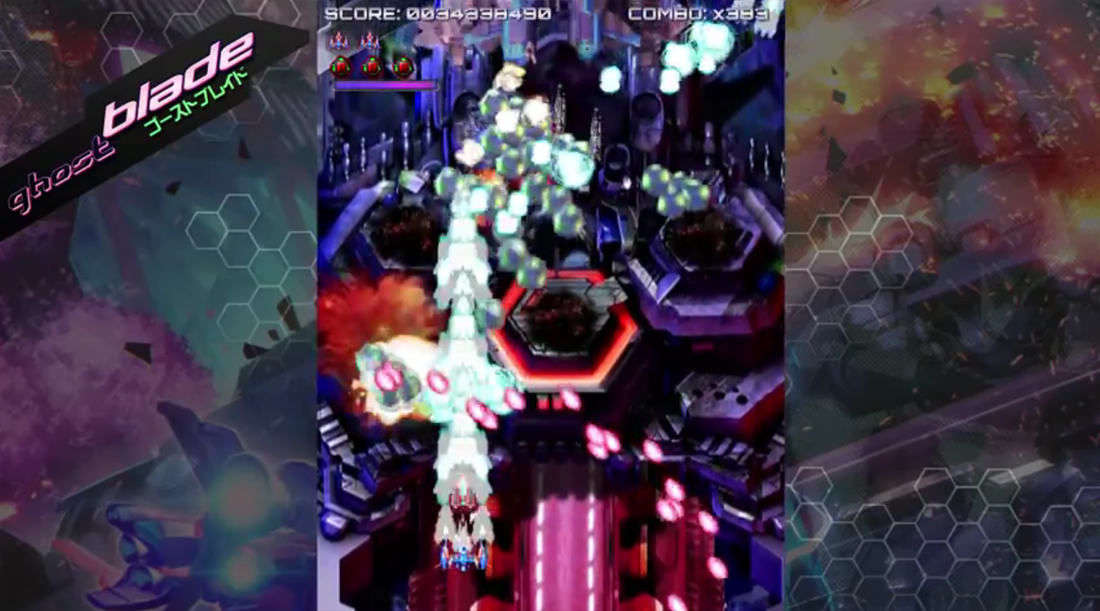 The audio and visual direction feels like it stepped out of the late ’90s, and I mean that in every positive way possible. Yet it doesn’t obnoxiously rub the decade in my face at the same time, which I tend to see in poser X-bit offerings that try too hard to convince me they are truly old school The soundtrack contains the “ump psht” drum-‘n-‘bass mood of the Dreamcast era as a foundation, but it molds into its own thing that highlights the action on screen.

The art direction is a great mix of the same style of 2D and 3D techniques that are in Mars Matrix and Ikaruga. Bosses dance onto the screen with independent moving parts, while pink and blue sprites blossom toward my ship. Everything is clear and precise. If it’s gold, collect it. If it’s bright blue, green, or pink — avoid it. If it flashes when shot, kill it. 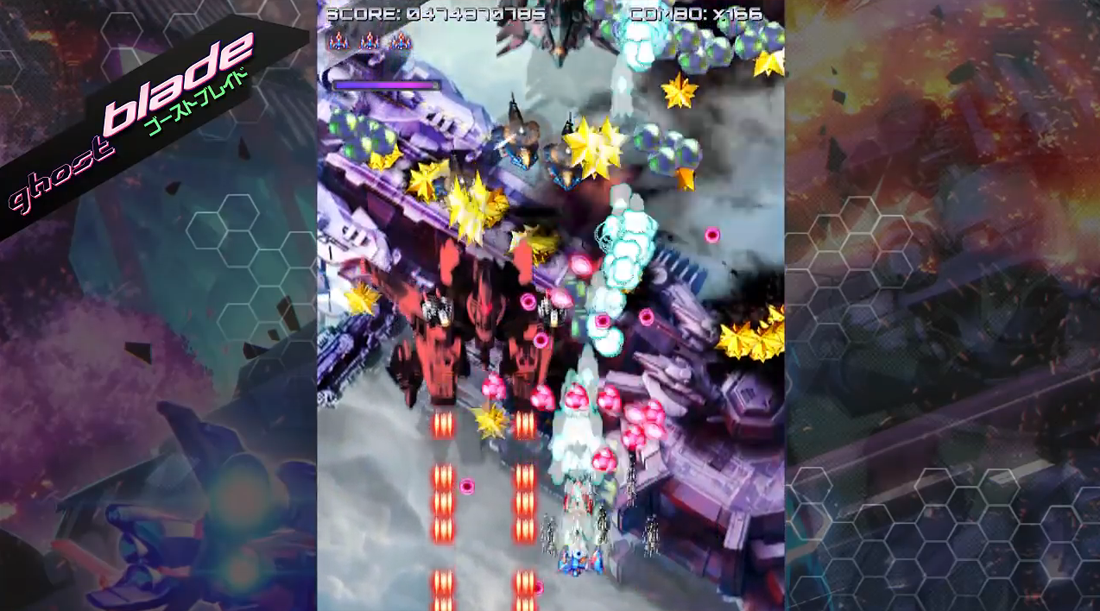 Many of the shoot-’em-up that appeared on the Dreamcast in the late ’90s pushed innovation in one of two ways: through their system design or through the level’s attack patterns. The Ghost Blade’s system is simple, if not a little cryptic at first, and its bullet patterns — although well paced — rarely reach a difficulty level that is also satisfying.

Hardcore players, whom I imagine are the main audience for this release, are going to eventually hit a hump after the honeymoon phase is over with The Ghost Blade. A big, lingering, “OK, now what?” hovers in the air after the first few plays.

The answer is … nothing.

Once you beat the game, it has no arrange mode or harder difficulty beyond normal. It’s done. Although I haven’t been able to go back and one-life the game, I imagine it won’t take long to get the patterns down compared to other shooters, especially since I can almost one-credit the game now. And I consider myself an average shoot-’em-up player at best.

Here’s the thing: I respect that the Dreamcast hardware provides Hucast with a smaller canvas to work on, with less accessible tools, than what we are use to on more modern platforms. The platform, in this case, can’t be a shield for play design criticism when I see that titles like Mars Matrix and Ikaruga got their start on the same machine. Hucast could’ve pushed some of this further. From what I see in The Ghost Blade, I believe it can. I at least hope it will, with future releases. This has become a thing with some modern shoot-’em ups — and most games period — and I’m getting tired of it. Game creators need to provide good documentation somewhere inside the game, explaining the intricacies of the system and the rules of play. The Ghost Blade LE ships with a paper manual, but it’s three pages, two of which are for the game’s story and one showing where the default controls are set up on the Dreamcast controller.

The Ghost Blade’s system may be simple, but it’s absolutely not intuitive. If the cost of paper is a concern, and a proper tutorial level is out of the question because of development time or disc space — I suggest putting a digital version of a manual in the options menu. I doesn’t do anyone in the grand scheme of a game’s experience, from the player to the designer, any favors to have the audience waste game time experimenting and trying to decode basic rules and systems.

It’s not a big deal that a game that’s throwing a ton of 2D sprites on screen, running on old hardware, is going to chug a bit. Hell, other Dreamcast shoot-’em ups from the console’s primary life cycle slow down as well.

To add to my knitpickiness, tate mode — which puts a game into full-screen display and requires turning the display on its side — seemed to suffer a bit more from slowdown than regular old letterbox mode. I put this on the bump up in performance having to expand the graphics being rendered.

The Ghost Blade is chunky, indulgent, and simple — like a pint of peanut butter and chocolate ice cream. Moving the big ship graphics toward some gigantic gold sprites, while weaving between pink, green, and blue bullets, feels like the video game version of digging through chocolate for that vein of crunchy peanut butter. It’s audibly, visually, and interactively comforting in a way that modern shoot-em ups are missing.

The play design is also accessible, once decoded: shoot ships, dodge attacks, build a combo meter, and collect the gold.

But I don’t see hardcore shoot-’em up fans, for who I think The Ghost Blade is unquestionably targeted to, appreciating that simplicity for the long haul. Some Dreamcast shoot-’em-ups from almost two decades ago have a lot more play depth. I respect Hucast for putting out what it did with The Ghost Blade — and I am tempted to check out its other releases — but I want to see them push their play designs a lot further with its next shooter.

The Ghost Blade released September 25 for the Sega Dreamcast. Hucast Games provided GamesBeat with a copy for the purposes of this review.