Google today started rolling out Android 6.0 Marshmallow to existing Nexus devices via an over-the-air software update. You can also download the factory images directly for the latest version of the world’s most popular mobile operating system now: Nexus 5, Nexus 6, Nexus 7 (2013), Nexus 7 Mobile (2013), Nexus 9, Nexus 9 LTE, and Nexus Player. The Nexus 4 will not be getting Marshmallow.

Google unveiled Android Marshmallow at its I/O 2015 conference in May. After three developer previews, Google last week announced the final release of Android 6.0 Marshmallow, which also debuts on the company’s two new devices, the Nexus 5X and the Nexus 6P. In addition, the company is telling users to “keep your eyes peeled for other new devices shipping with Android 6.0.”

During this year’s Nexus event, Google highlighted a few of Marshmallow’s features: voice search from the lock screen, charging indicator for faster charging via USB-C, simpler heads-up notifications, and suggestions in the app drawer. The biggest highlight was, of course, Now on Tap, a Google Now feature that answers questions anywhere in Android based on what you’re doing on your device (available in English starting today, though Google will be adding more languages and features “in the coming months”). Google detailed the feature a bit more today with a few examples. If your friend just texted “Hey, want to go see The Martian this weekend and then grab dinner at The Slanted Door?,” Now on Tap means you can just hold down the home button and have Google Now show you quick info about the movie and restaurant, jumping into the right apps to read reviews, see the menu, and reserve a table. Once you’re done, the back button will take you right back to your messaging app so you can respond to your friend. 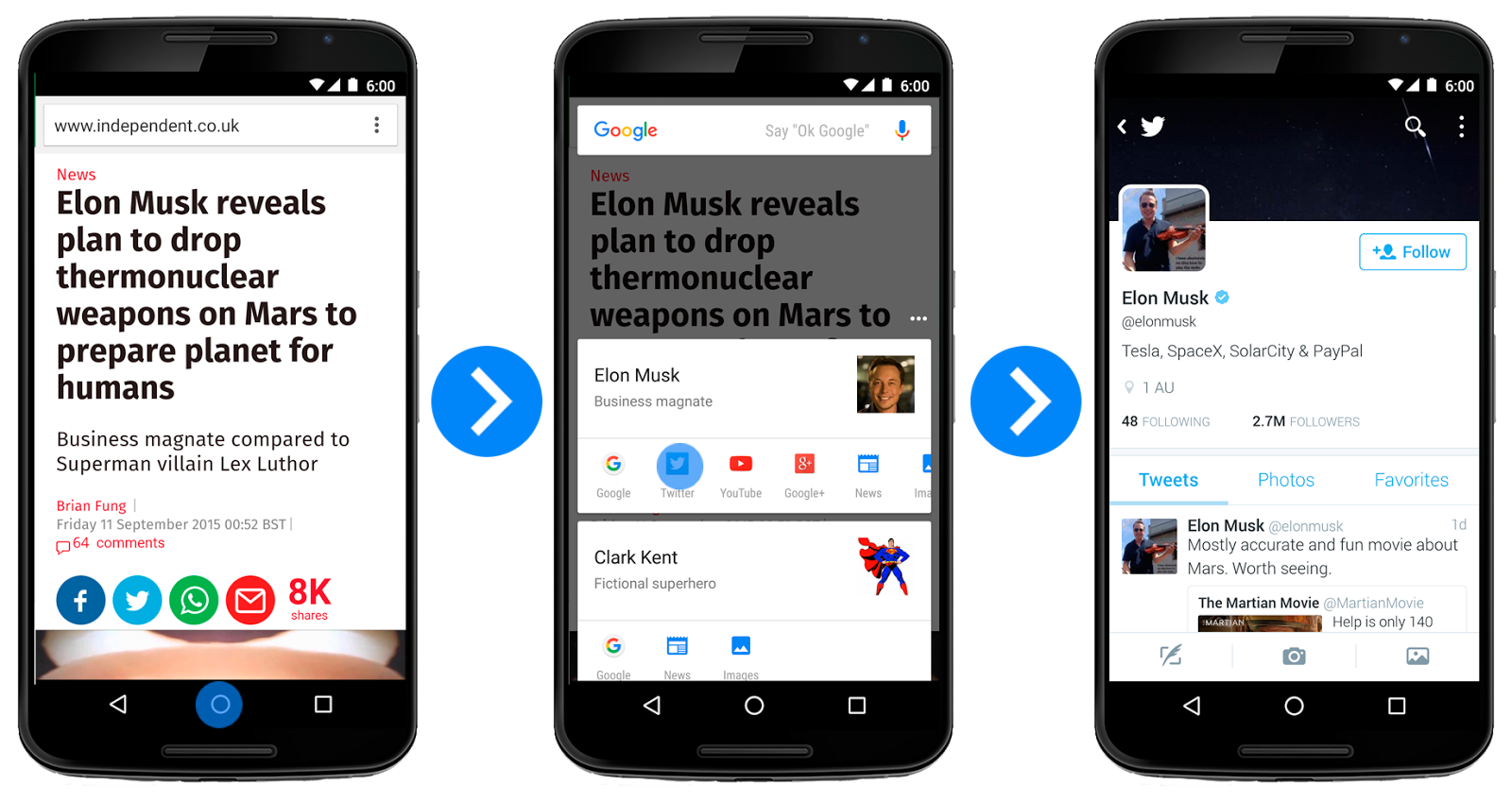 Google gives two more examples. Now on Tap can show you quick facts about the 2016 U.S. elections or Elon Musk’s plans for Mars, letting you jump straight to social media or the latest news articles. It can also give you more info about a new song, whether it’s coming from a playlist or station in Google Play Music, Pandora, or another music app. 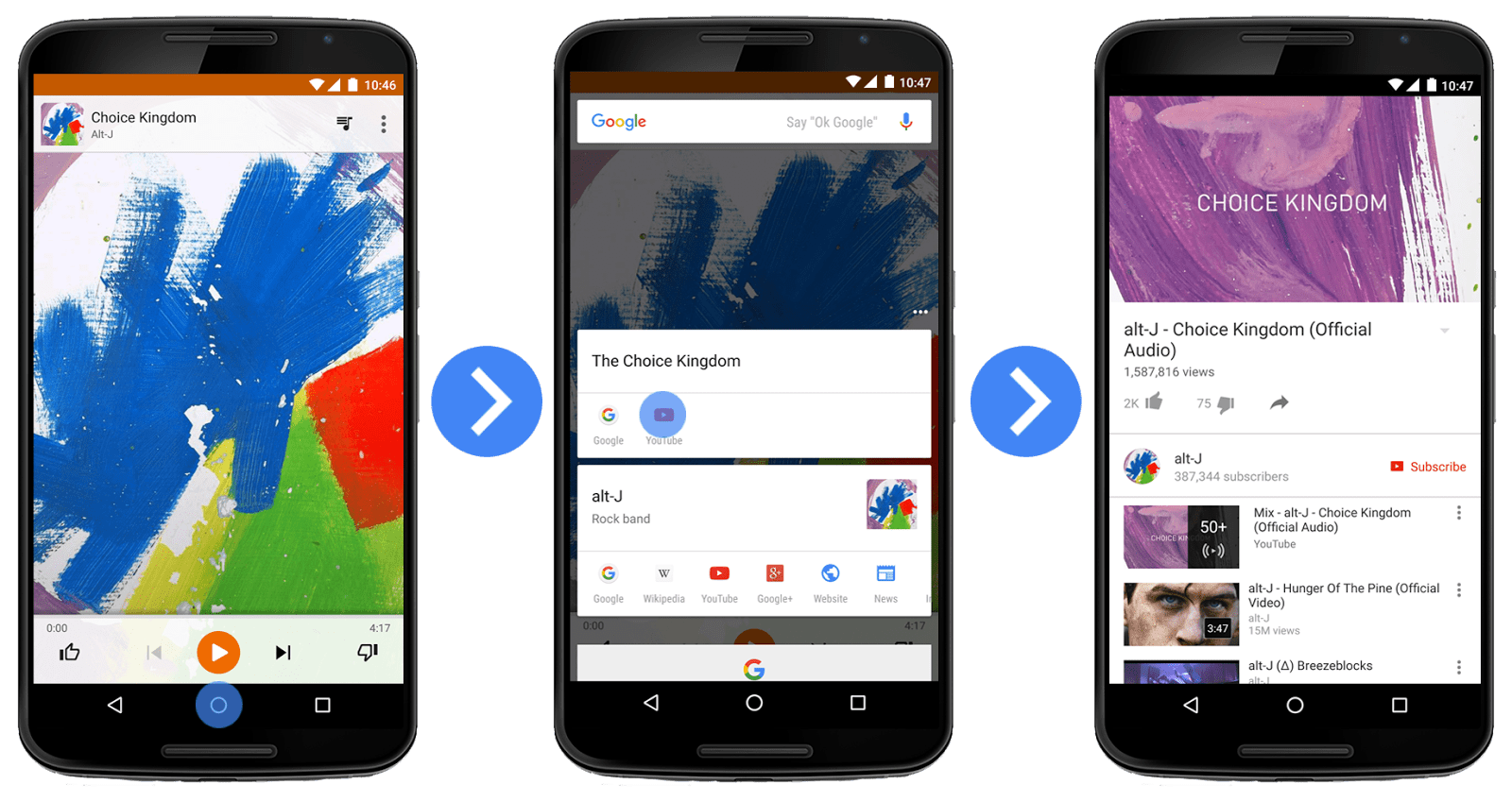 Marshmallow has two new features for improving battery life. Doze means your device uses fewer resources when left unattended: It automatically goes into a deep sleep state to conserve power (don’t worry, even if you forget to plug in your phone before bed, your phone’s alarm clock will still ring). App Standby puts your seldom-used apps into a reduced activity state to conserve battery for the apps you use more frequently.

Also, support for fingerprint sensors is a go — while Android devices have supported fingerprint authentication before, it was up to OEMs to implement the feature, but now the operating system can handle it. You can use your fingerprint to unlock your device, authorize transactions in the Google Play store, sign into third-party apps, and check out with Android Pay.

Arguably the most important new feature for developers is a revamped permissions model — apps will only prompt the user for a specific permission when a feature requires it (in previous versions, Android presents a list of requested permissions before you install the app). You can deny any permission and still continue to use the app.

With Nexus devices now getting Marshmallow, Android device makers will be next to announce when and which devices will get Marshmallow. Most flagship devices should have the latest version by the end of the year, but many phones and tablets will lag behind for much longer, as is typical with Android releases.