In 2007, Rock Band was a triumph. It turned music-rhythm games, which were focused almost entirely on an intense, feverish show of dexterous prowess, into a smooth, laid-back experience. You could care about your high score, about nailing a performance, but both of these aspects took a back seat to just experiencing music with a group of people you enjoyed hanging out with. Players wanted to party with their music, not grind it out, and Rock Band gave them this.

Then a not-so-chill cold war broke out between Guitar Hero and Rock Band, sequels saturated the market with games (and people’s houses with plastic instruments), and rhythm games went comatose around 2010.

Five years later, we have Rock Band 4 (out tomorrow on PlayStation 4 and Xbox One, and this review covers both versions), a game whose existence seems almost necessary; Rock Band’s biggest strength had always been its enormous catalog of songs, which would make the move from sequel to sequel. Bringing that into the new generation, then, sounds like a no-brainer.

And that’s what Rock Band 4 is: a no-brainer. And that’s not always a good thing.

Do people still care about music games? At a time when streaming services have made music more disposable, more of a backdrop to our lives than ever, the idea of sitting down and focusing our attention on a single song seems like a relic. But mimicking the notes of our favorite musicians, of perfecting the toughest part of a song, of getting a better sense of how the music we love is put together — all of this still works, and it makes for a damn good time when everything’s in motion.

I had my doubts about whether I’d still enjoy moving my fingers around in time, pounding drum beats, or butchering the chorus to songs I’d never heard, but it didn’t take long to get back into it, to learn songs, go on tour, and just enjoy music for a while. As soon as the DLC servers went live, I combed through the entire back catalog to see if there were any gems I’d missed. I’ll probably end up buying a few more songs.

Do people still care about music games? I hope so.

Drums are still the best part of Rock Band

Matching the guitar parts lick for lick is still fun, but drums have always been the best part of Rock Band, specifically because they create a more resilient illusion; I never once thought I’d have what it takes to play a real guitar in all my time playing with plastic controllers, and I can hear myself sing and know I sound off-key. But matching a drum beat in Rock Band still feels like the real deal, and I never had more false aspirations than when I got a 98 percent on drum beat even on Medium difficulty. Rock Band wants you to pretend you’re a musician, and nothing accomplishes this better than drums do.

Your DLC is safe and sound (mostly)

The servers weren’t live for most of my time with Rock Band 4, but as soon as they were, I managed to get everything I’d purchased from the in-game store into the game. It had a few interface issues (not every song I’d bought comes up as “purchased” in the list of songs, and I had to remember and take a guess at a few), but it seems like just about every song has made the transition already, if not now, then in due time. This will probably be the biggest sticking point for a lot players; any long-term fumbles on this end could end up sinking the whole endeavor. But everything seems stable on Xbox One at this point. On the PS4 store, though, prelaunch seems a bit spotty. As for songs from previous games, those will be available in the coming weeks, likely through a separate import option. We’ll update this review after we check in at launch to see if everything’s up to speed.

The new songs are great

Rock Band 4’s song list is better than it has any right to be. By now the world’s most popular songs have probably been taken, but as we dig into more modern music and less recognizable hits from established giants, the variety seems better than ever. Top songs in Rock Band 4 include St. Vincent’s “Birth in Reverse,” Queens of the Stone Age’s “My God is the Sun,” Elvis’s rendition of “Suspicious Minds,” and “Recession” by Jeff Allen. Few things are as subjective as people’s taste in music, but this feels one of the series’ most diverse soundtracks, both in terms of the genres and from a “is this fun to play?” perspective.

Above: Rock Band 4’s interface remains largely the same, except when it comes to the song list.

As fun as Rock Band is, the whole experience feels like throwback. I also couldn’t shake the feeling that the whole experience was a little rote. The only real feature new to Rock Band 4 is the freestyle solo, which turns a song’s regular solo (in previous games, the parts where the board became blue) into a chance to change the song up a bit by strumming whatever notes come to mind, as long as you strum in tune with the music and switch between strumming freely and holding notes when told.

It’s fun the first few times you do it, since anything you do ends up fitting the song. It does a good job of making songs you’ve played more than a dozen times sound new. But I eventually turned them off, since you can still lose your note streak for doing poorly, and I prefer to know which notes I’m missing instead of having a vague idea of where I’m screwing up.

Aside from that, this is just more Rock Band. In fact, it’s arguably less Rock Band than before (see my next point). You can modify songs with freestyle solos, but it has little else to encourage revisiting older favorites and to see if you can approach them from a new angle or with a new instrument to learn more about them. There’s no difference between older versions of the instruments and the new ones.

This wouldn’t feel as dated if you couldn’t look just two weeks ahead at Guitar Hero Live and see its revamped fret layout and live-action backgrounds. The core is still solid, but if Harmonix decides to keep this up, it might want to look into re-upholstering the whole experience, if only to make it feel new.

Say goodbye to your keyboard

If you figured yourself a keyboard aficionado when Rock Band 3 came out, you’re out of luck; Rock Band 4 won’t support the instrument for the foreseeable future. This is a shame, because they keyboard added something new to the series as it was on the downturn, and it’s sorely missed in a few of the songs on the new setlist. It was probably the least popular instrument of the four, but it’s still sad to see it go. Also gone: the pro guitars from Rock Band 3.

If you’re young enough to have never played Rock Band before, or dismissed the idea of music games as a fad until now, this is probably not the best time to start. Aside from a quick lesson on freestyle solos, it has no proper tutorial, nothing to teach you how to actually play any of these instruments aside from going through some of the easier songs on the easiest difficulty.

Even more daunting is that if you didn’t invest heavily in DLC or have songs from previous games to import, your collection is going to feel miniscule compared to someone who’s been keeping up all this time. A lot of “important” songs are stuck on older games, and it’s going to be a pain to buy or download them for a single song you might want. Without that huge library to kickstart your experience, you might wonder what the big deal about these games was in the first place. 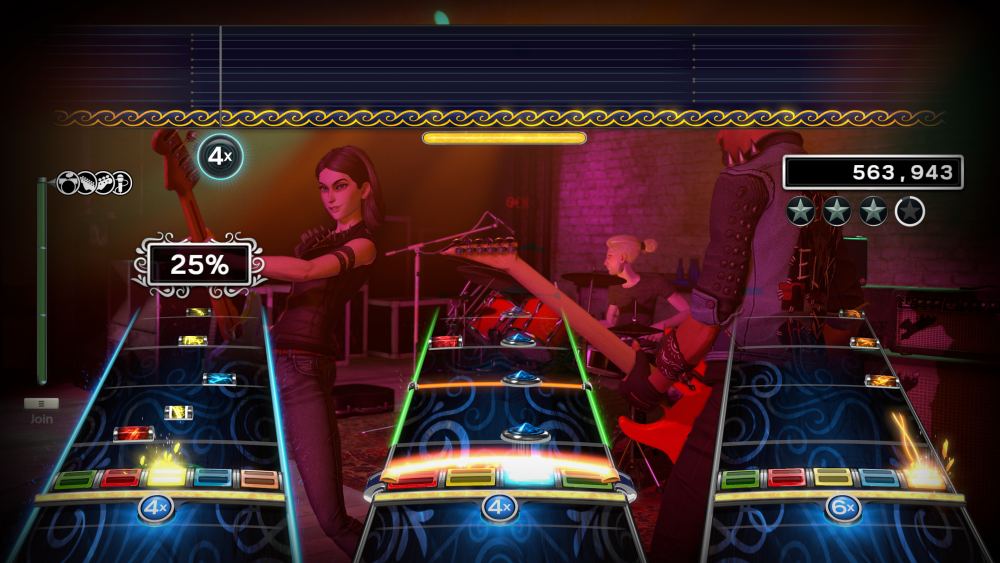 Above: Rock Band 4 still supports the cymbals that let you play Pro Drums (indicated by the notes that look like Hershey’s Kisses).

Rock Band 4 asks you to overcome a bunch of issues in order to have the best possible experience. For one, its enormous amount of DLC might be as much of a burden as it is a strength. If you were one of the many PlayStation 4 owners who made the switch from the Xbox 360 to Sony’s box for this generation, you’ll have to buy an Xbox One to have access to your back catalog, since the DLC is platform-specific.

It has few other minor problems. The PS4 only has two USB slots, and Rock Band supports three microphones, which means you’ll have to find an extra wireless microphone if you actually have three people who want to sing. This gives the slightest edge to the Xbox One version, which has three USB slots (though you’ll probably end up choosing the platform with all of your DLC on it, let’s be honest). Finally, songs from Rock Band, Rock Band 2, Green Day: Rock Band, and Lego Rock Band will work, but not until some time after launch. And no one’s sure if Rock Band 3 songs will ever make it over.

You might also wonder if it’s worth it to stock your house with another round of plastic instruments, which might be the biggest logistical hurdle of all.

Who wants to play bass?

Not me. But someone’s going to have to.

Rock Band 4 feels like both a necessity and an afterthought.

The band experience is intact and proves it’s not quite time for the music genre to recede into gaming history. And few would argue that bringing Rock Band’s enormous catalog to modern consoles isn’t a good idea. But as gargantuan a task as bringing 1,700-plus songs into 2015 might be, the rest feels like the bare minimum: the Rock Band experience, except on newer hardware.

It’s still a good proposition, but without something new to get people talking again, Rock Band 4 argues as strongly for the series’ depreciation as it does its relevance.

Rock Band 4 is out October 5 and PlayStation 4 and Xbox One. The publisher provided GamesBeat with copies of the game as well as guitars, drum kits, and microphones for both platforms for this review.