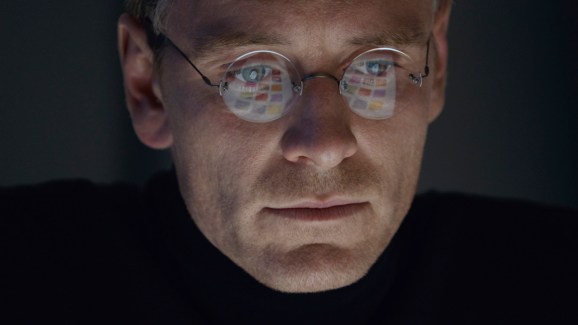 It’s not easy to make a good movie about Steve Jobs. (Sorry, Ashton Kutcher. You tried.) But, finally, director Danny Boyle and screenwriter Aaron Sorkin have given us Steve Jobs, a movie that distills Steve’s huge, complicated persona into a tightly wound backstage thriller.

It’s understandable if you feel repelled by the idea of another Jobs movie: There is no shortage of biopics, biographies, documentaries, and feature-length articles mythologizing his considerable genius. Every 18 months, it seems, we get a new iPhone and a new Jobs movie reminding us what a great, conflicted man he was.

But even if you buy into the cultish Apple fandom (I tend to), the amount of ink spilled about Jobs can seem like a little much. A genius makes some great stuff, is a harsh boss and an asshole father, dies, and is mourned the world over. Whatever.

So why should you see this Danny Boyle-directed rehash? Because, of the entire bunch, it’s the only film worth watching.

Earlier films like the awful, Kutcher-led Jobs and Pirates of Silicon Valley dwelled endlessly on Steve’s formative years — the shaggy halcyon days in the garage, his dabbling in psychedelics.

But Steve Jobs cuts right to the goddamn chase. It starts at a low boil and continues cranking until its soaring, oddly emotional finale.

Michael Fassbender, starring as Jobs, carries most of the film on his own. Literally — he’s in almost every single frame, and is involved in almost every piece of dialogue in the movie. Fassbender’s Jobs paces from one scene to the next, rarely ever seated. This claustrophobic universe is a nice artistic parallel to Steve’s nitpicking omnipresence. At the outset, it’s almost distracting how little Fassbender looks like Jobs. But he turns in such a stellar performance that, by the time we see him graying and New Balance-clad, all is forgiven.

The movie profits hugely from Kate Winslet’s performance as Joanna Hoffman, Jobs’ loyal and long-suffering head of marketing. Despite being wholly absent from other Jobs-related movies, Hoffman is a critical element in Jobs’ operation. She stands up for Jobs but also stands up to him; she’s the only person in the film with the ability to cut through Steve’s much-mythologized “reality distortion field.” But she also pushes the story forward, shuttling Steve through dressing rooms, backstage hallways, and tense conversations with people pushed to the edge by Jobs’ fiery personality. Steve Jobs the film benefits from Winslet as much as Jobs the man benefited from Hoffman. Winslet’s work will almost certainly earn her an Oscar nomination.

This particular film has two major advantages over its other, lesser brethren.

The first is simple: a strong ensemble cast led by director Danny Boyle (Slumdog Millionaire, 127 Hours) and written by Aaron Sorkin, probably the only screenwriter in Hollywood you know by name. Scott Rudin (remember the Sony leak? Yeah, him) served as executive producer, marking the second time Rudin and Sorkin teamed up to make a tense film about an equally driven and flawed tech deity (remember The Social Network? Yeah, that).

Sorkin’s script plays out much like his work for Newsroom and The Social Network — talky and witty, pretty much nonstop. His style can be tough to swallow, but it suits Jobs’ overbearing, high-functioning mania.

The second advantage is the script’s structure: three different moments in the life of Steve Jobs. Sorkin ditched the traditional cradle-to-grave arc that ruins so many biographical films. In adapting Walter Isaacson’s acclaimed biography, Sorkin has distilled Jobs’ life into three critical moments: the 1984 launch of the Macintosh, the 1988 launch of the NeXT computer that followed his departure from Apple, and the 1998 release of the iMac, after Jobs returned as Apple’s messianic figurehead.

Because this is a film about a man and not a product, each scene ends right as Jobs walks onstage. (Thankfully, Sorkin didn’t feel compelled to dramatize an Apple Keynote.) Instead, the film peels back layers of Jobs’ (and Apple’s) mythology in the tense backstage moments before these events.

In these moments, Jobs confronts technical and interpersonal glitches. He clashes with his ex-girlfriend Chrisann Brennan, with whom he had a daughter he spent years denying. He also navigates his roller-coaster relationship with John Sculley (Jeff Daniels), the Apple executive who booted him. Apple cofounder Steve Wozniak and developer Andy Herzfeld (respectively played by Seth Rogen and Michael Stuhlbarg) pop in and out of the story, serving as yardsticks by which to measure Jobs’ ascension to whatever demigodhood he eventually attained. Despite a number of disagreements and outright yelling matches, their characters are devoted and kind and tend to coax out Jobs’ sweeter side.

But the emotional crux of the movie comes from Jobs’ fraught relationship with his daughter Lisa, played here by three different actresses, one for each vignette. In an already rapid-fire film, these father-daughter scenes with Fassbender ping-pong quickly between laser-focused firebrand and conflicted, flawed human.

It’s funny. It’s deadly serious. It’s well-paced. It plays fast and loose with the historical facts. It’s probably not going to change your mind about anything. But if you’re the type of person who always wondered what went on behind the curtain at Apple, this is your chance.