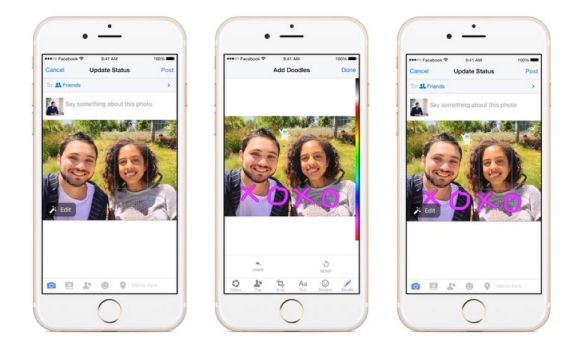 Facebook has launched a new feature for its photo-editing suite of tools that gives you the ability to scribble right on a photo before publishing it to the social network. In a way, it’s reminiscent of what people could do already within Snapchat — minus the ephemerality, of course.

It’s rolling out now, so if you don’t see it yet, be patient.

Within Facebook’s iOS and Android apps, select a photo to upload and then tap on the Edit button. From there, choose Doodle from the list of editing tools. You can then drag your finger up and down the color bar to select an ink color, change the size of the pen, and drag your finger across the screen as you doodle on your work.

In June, Facebook revealed it was adding photo-editing tools to its mobile apps. You could add stickers, apply filters, and even add messages, but never before could you really free-draw on the photo. That changes today. And since Snapchat passed up Facebook’s $3 billion acquisition offer in 2013, the social networking company decided to create its own tools and build its own Snapchat-like offering.