Success is in the cards for Blizzard.

Game-streaming hub Twitch revealed a list of the 10 most-watched games on its site for September. League of Legends remained at the top with Counter-Strike: Global Offensive coming in at second, but Hearthstone: Heroes of Warcraft took the No. 4 spot from Dota 2, switching their positions from August. Interest in Dota 2 might have dropped off since its yearly championships, The International 2015, happened in August. Hearthstone released a new expansion, The Grand Tournament, in late August, which could have also contributed to it overtaking Dota 2 in September.

You can see the list below, which gives you a good of which games are the most popular. Over 1.7 million broadcasters stream with Twitch, and the site had a peak concurrent audience of 2.1 million people in 2015. If people watch your game, they’re likely to play it, so publishers love having their titles popular on the site. 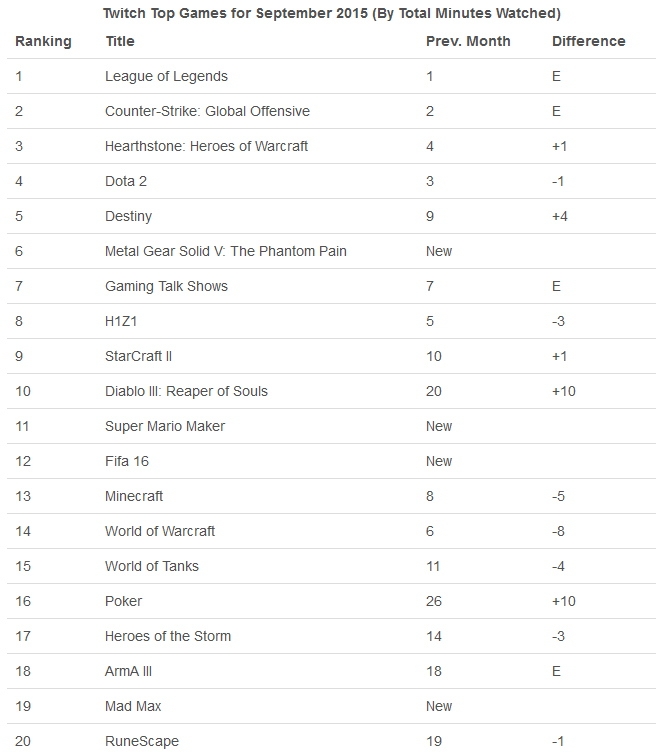 Metal Gear Solid V: The Phantom Pain had the best debut for a new game, ranking all the way up to No. 6. Super Mario Maker also showed up at No. 11, with FIFA 16 right below it at No. 12. Super Mario Maker’s spot is impressive when you consider that it wasn’t a mulitplatform release and that the Wii U doesn’t have a built-in Twitch app like the PlayStation 4 and Xbox One does, which makes streaming the game more difficult.

Destiny got a nice bump thanks to the release of its expansion, The Taken King. It climbed four spots to No. 5.

While Hearthstone continues to perform well on Twitch for Blizzard, it isn’t all good news for the developer. It’s MOBA and League of Legends/Dota 2 competitor, Heroes of the Storm, fell three spots from August to No. 17. On the other hand, its action role-playing game Diablo III rose a whopping 10 spots to No. 10 following the release of new, free content at the end of August.