Ninja Metrics refined its ability to predict who would spend money in free-to-play games. And now it is turning that technology loose on a much bigger challenge: boosting the revenues of retailer and ecommerce vendors by properly analyzing the social value of shoppers.

Now that it has proven the predictive analytics in gaming, the Los Angeles company is rolling that technology out in a much bigger market in partnership with Springboard Retail, a cloud point-of-sale and retail management company that processes $200 million in sales in the U.S. That’s an important partnership because it could help Ninja Metrics’ technology spread far and wide among retailers, who stand to gain a lot of revenue from the technology.

Dmitri Williams, chief executive of Ninja Metrics, said in an interview with VentureBeat that, while gaming is a fun market to study, the potential of the ecommerce and retail markets is much larger. Springboard happens to have a presence in both markets, and so has been able to test Ninja Metrics’ Katana Analytics Engine in both retail and ecommerce. The result has been a big boost in revenues.

“We can do the same thing for retailers and e-commerce companies that we do for game developers,” Williams said.

Here’s how it works. In gaming, Ninja Metrics figured out the “social value” of gamers who don’t spend much money. These players are stingy themselves, but they cause so much activity to happen in the game that they spur everyone else to stay in the game, have fun, socialize, and spend money. These social players are a therefore a critical link in monetizing the players who do spend money.

In the same way, some people are more social and cause others to shop and spend money. Williams said the company tested this idea by correlating anonymous purchases over time. If one person spent in one location at a certain time, and then another person spent money at the same location, then you could set up a test. Do these people know each other? Does one cause the other to spend? If you see this happen again and again, you can conclude that one social person causes the other to spend. 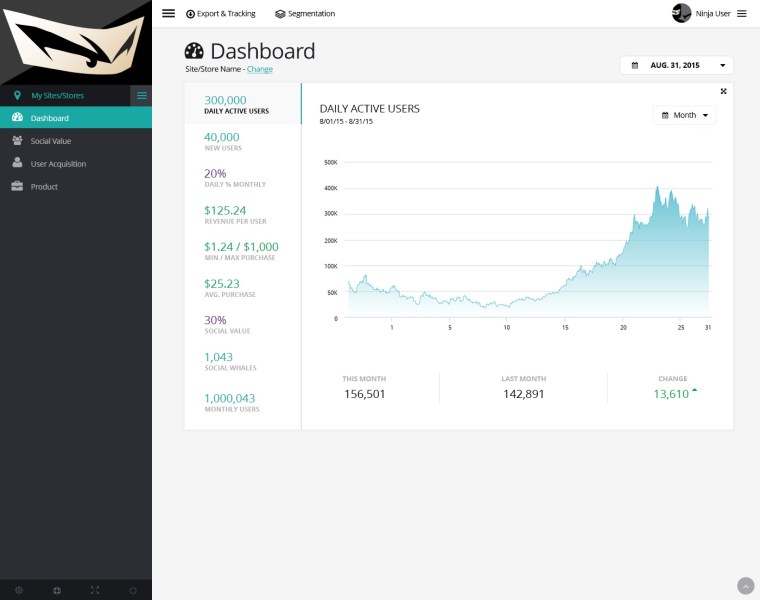 Above: Ninja Metrics can analyze the social value of shoppers and help retailers target the right people with the right promotions.

Working with a Springboard customer, retailer In the Pink, Ninja was able to identify In the Pink’s influencers, or “social whales,” and fed that data back into the Springboard Retail POS system. This will help In The Pink use data within Springboard Retail to understand what customers are buying in real-time, personalize offers to social influencers and their networks, and track their sales impact—something that hasn’t before been available at the brick and mortar level.

“Retailers are starving to understand performance of marketing dollars,” said Gordon Russell, CEO and cofounder of Springboard Retail, in a statement. “Retailers know best purchasers, or economic whales, but they don’t know social whales and the influence they can have. This is very powerful! Targeted marketing campaigns that are measurable and produce meaningful, actionable, consumable data – are what will drive sales and margins for retailers.”

Williams said the metrics are clear, actionable, and updated daily. It will allow marketers to quickly leverage the power of real-world friendships in a positive way. Retailers can find out how much customers will likely spend and how their social influence impacts the bottom line. They can also target the most influential and valuable shoppers, and use a dashboard that lets them run a variety of analytics queries.

At first, Williams wasn’t sure how accurate the targeting of retail and ecommerce shoppers would be. In gaming, the analytics engine is about 85 percent to 90 percent accurate in figuring out social value. In retail and ecommerce, Williams said he was surprised that the accuracy level could reach 80 percent to 85 percent, much higher than he expected. That could translate to a lot of revenue boosts for customers.

“As much as I love games, the pie here is a whole lot bigger,” Williams said.

Ninja Metrics was founded in 2009 by Williams and his cofounders on the belief that the science of social connections is the key to unlocking value among customers. Seven years of development in university labs has led to the creation of a tool that the company hopes will disrupt the analytics industry.