Prison Architect is a top-down voyage into the horrors of penitentiaries, and you’re always at the center of the chaos. Hell, sometimes you’re even the cause of it.

Developed by Introversion Software, with the final version of the game available for Mac and PC on October 6, Prison Architect is a prison management sim akin to a strategy game. As the architect, you’re in charge of building and maintaining prisons of various sizes. You start out with an empty plot of land in which you construct holding cells with water and electricity to house prisoners. This will buy you enough time to start building proper holding blocks, kitchens, canteens, yards, offices, and more, replete with guards, cooks, dogs, doctors, and construction workers. From there you can take your prison in any direction, treating your prisoners in any way you want. Want to abuse them and use force to keep them at bay? Or take the time and effort to better their lives and help them?

Prison Architect is a challenge and quite addicting — you’ll have a great time playing it. But it’s the commentary on the prison system, told through prison riots, murder, contraband, corruption, ridiculous incarcerations, and the excellent campaign mode that really make it shine. It chilled me to the bone, and it isn’t like anything I’ve played before. 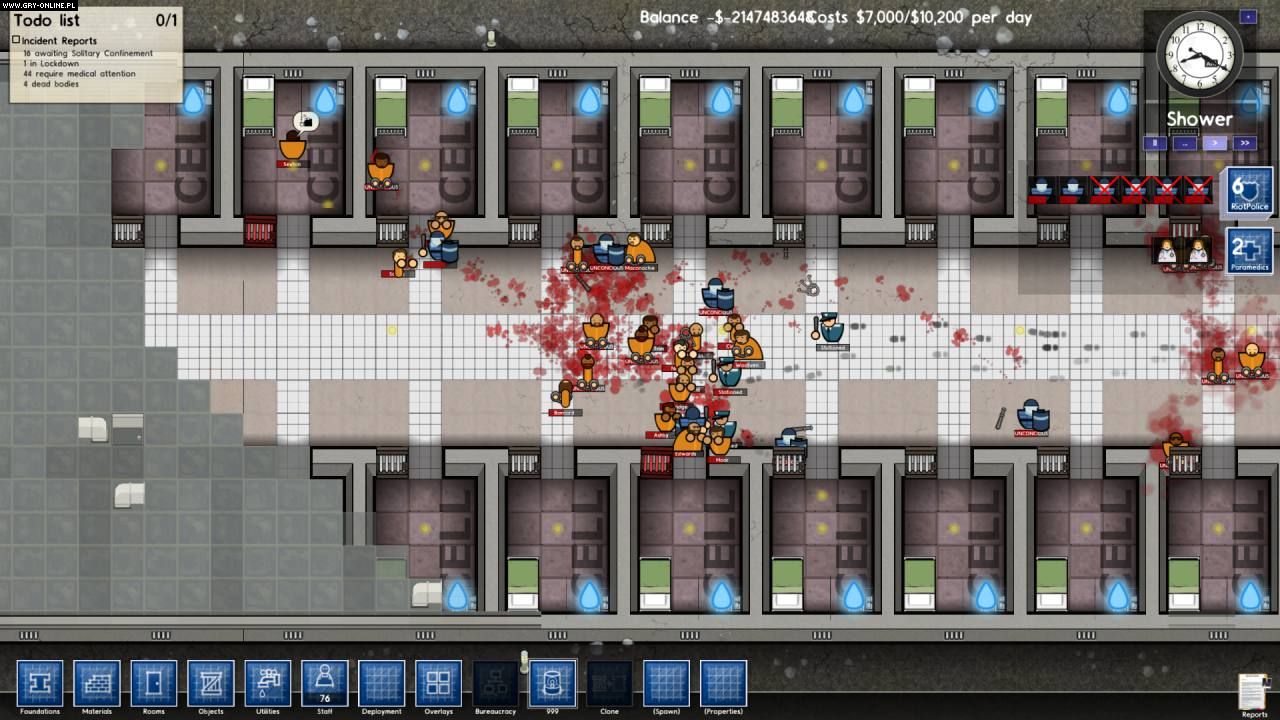 Above: A bloody massacre.

The gameplay systems aren’t too complex or overwhelming, nor are they too basic and easy. The game does a good job of teaching you all of its mechanics. For example, you learn right away that in order to build a structure, you’ve to create a basic foundation and doors first. You need construction workers to do so, and the more you have, the quicker the job will get done. Actually building something is simply dragging your mouse as far as you want across an area of the land. You also place objects — like chairs, desks, and TVs — and staff by just clicking on them from the game’s streamlined menus. Prisons start out small, but they can potentially house hundreds, if not, thousands of inmates and maintaining them is really fun.

Building stuff is simple, quick, and enjoyable, which means your focus is always on much grander things, such as creating a proper regime for the prisoners and satisfying (or not) their many needs. Most of them are drug addicts and alcoholics, so you can create a schedule that’ll allow them to meet their psychiatrists or doctors, and attend AA or NA meetings. This has the potential of turning them into better human beings and giving them a better chance of changing their lives once they complete their sentence. Or you can not care at all, save your money on those doctors and new buildings, and let them be.

This extends to feeding the inmates properly, and providing them with decent clothes, TVs, radios, and other forms of entertainment. You also have to clean the prison on a regular basis. Ignoring these tasks will lead to full-blown riots that will most certainly result in deaths. You’re also put in charge of completing prisoner executions as well. Yes, actual state executions. Prison Architect constantly tests your morals and nerves, and it most definitely has the potential of making you learn plenty about yourself. Will you be cruel to the inmates, or will you treat them well? Even without playing its wonderful story-driven campaign you’ll witness plenty of shocking and eye-opening moments. Heck, I saw a prisoner kill a few guards with a spoon.

In addition to these gameplay moments, the campaign is also memorable. It actually starts out with you being in charge of an electric chair execution. The criminal is a former school teacher who shot his wife when he found her sleeping with a mobster. You relive this moment and similar ones through well-crafted flashbacks that contain disturbing photos and scenarios. The local Church Father then gives the criminal a few moments to pray and confess while also questioning the necessity of the execution. Is it right? Does he deserve this? Should he be given a second chance? You can act kind or mean towards the inmate by deciding how to build the execution room and cell. I personally decided to give the man a bookshelf and a proper window to look out of for his final hours. 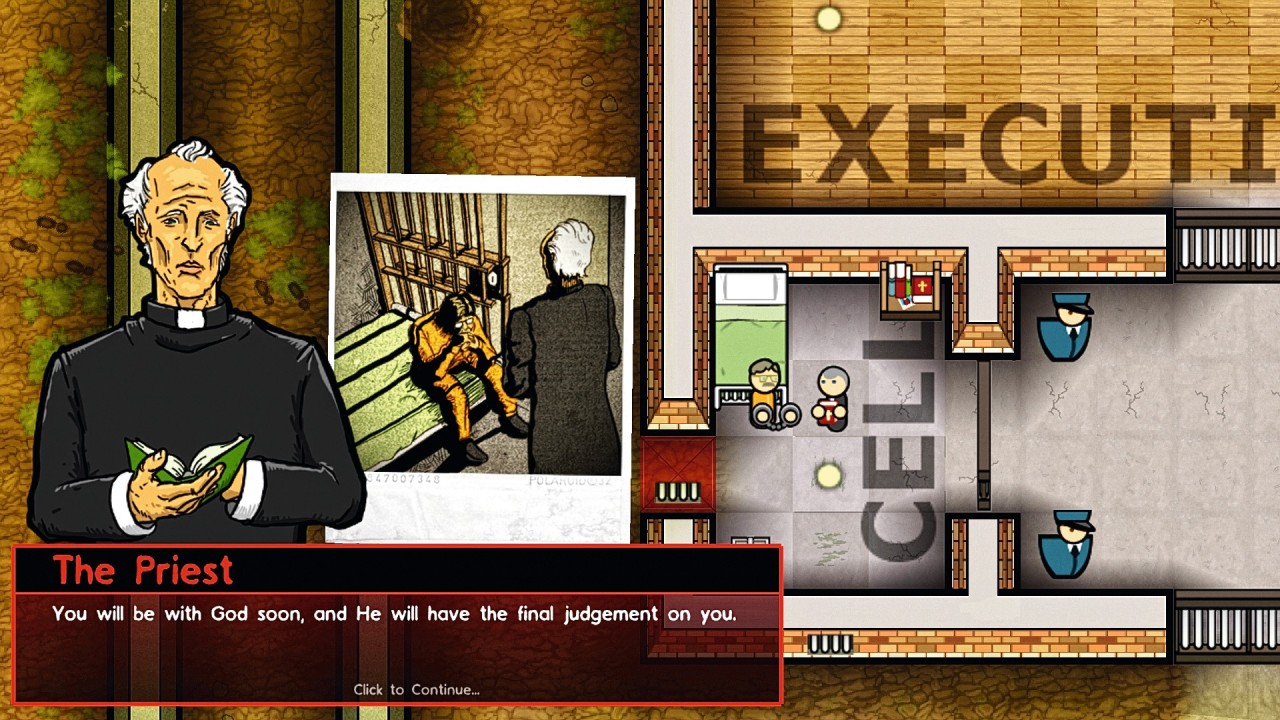 Above: Pray for me.

You’ll find plenty of similar moments such as this one spread throughout the campaign. You’ve to deal with mobsters and gangs, political corruption, kidnappings, and more. Prison Architect gets really brooding, and it has some of the best storytelling I’ve seen all year. The best part is how well the story fuses with the gameplay; they can’t help but complement each other. Deciding the type of execution cell to build in the beginning is a perfect example. You’re given an interesting story beat, then you’ve to actually construct the room and the chair that’ll kill the prisoner, and you have the freedom to make it as comfortable as you want for him.

My favorite moment involves a powerful figure being captured by an inmate within the prison. You find out that this individual hasn’t been releasing prisoners when they should’ve left a long time ago because keeping them instead generates huge sums of money. It’s intriguing and rather important stuff. It really does make you think about the way prisons are run, and how inmates are treated.

Prison Architect also features Escape Mode, where you play as a random inmate tasked with trying to escape a prison. You start fights to boost your reputation with the other inmates; create your own little gang by recruiting prisoners and training them; find hidden weapons and tools hidden in trash bins and/or steal them from other prisoners; and use shovels to help dig your way out of the prison, Shawshank Redemption-style. Though Escape Mode isn’t as robust as the rest of the game, it’s still a cool feature that provides a whole different perspective on the prison system.

The only complaint I’ve with Introversion Software’s game is that it tries to be funny at times, and it doesn’t always work. Its aesthetic lends itself to comedy as it looks cordial and innocent. But stuff like having David Tennant, the actor who played Doctor Who, as an inmate just comes off feeling distasteful and a bit jarring. He’s just there to generate some desperate giggles. I feel as though it fails at trying to mock the way prisons are run through dark comedy. It does a better job doing that by being serious. 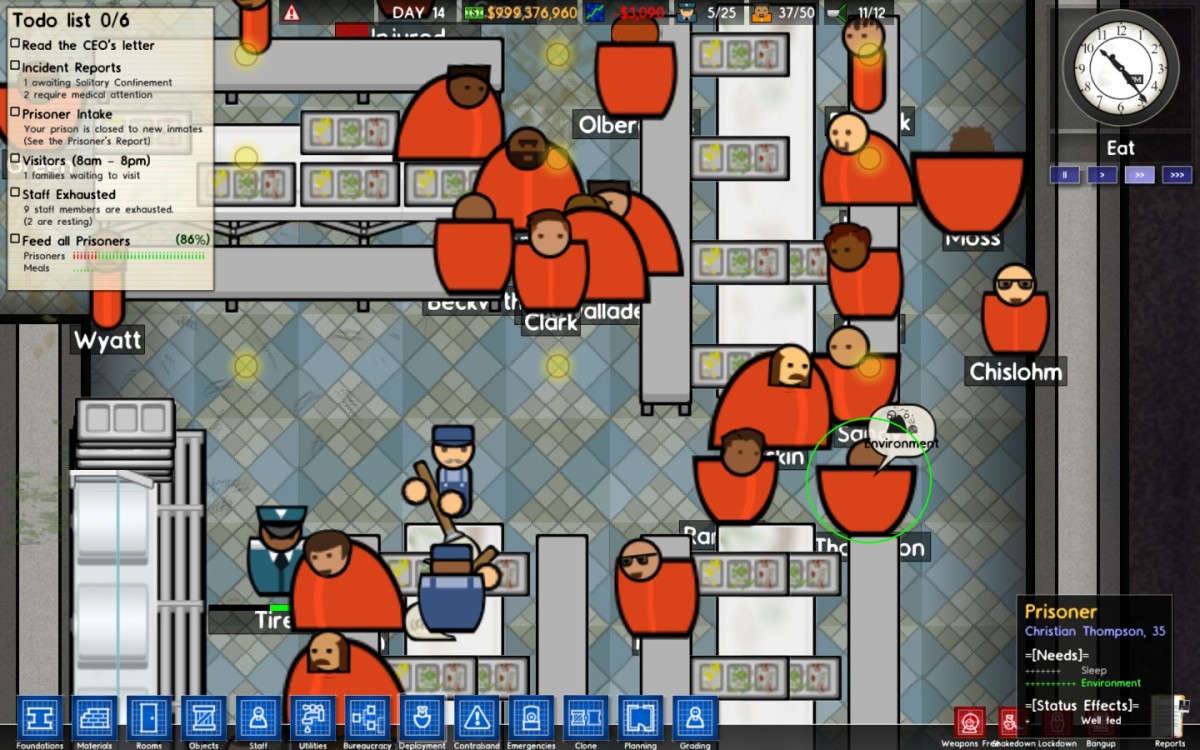 Above: Feed the prisoners!

Prison Architect is arguably one of the most important and disturbing games I’ve ever played. It’s one of those gems that expertly displays the interactivity and narrative potential within video games. The way prisons are run, and the obnoxious amount of incarcerations for petty crimes and inmates we’ve in the United States are real issues, and Prison Architect bravely puts you at the center of these problems. It’s a blast to play, has terrific storytelling, and you’ll learn a great deal by playing it. What more can you ask for?

Prison Architect is now available on Steam for Mac and PC. Introversion Software provided GamesBeat with a review code of the game for the purposes of this review.