With all the brouhaha about Amazon cutting commercial ties with Apple TV and Google Chromecast, it’s easy to forget that the video-streaming space is also populated by other players — such as Roku. Indeed, the Calif.-based company lifted the lid on the fourth incarnation of the Roku Streaming Player today, with the aptly named Roku 4 bringing 4K Ultra HD (UHD) to the mix. 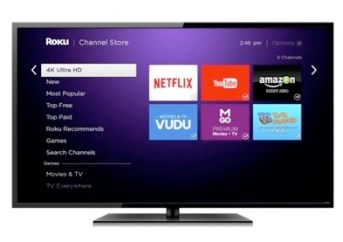 That the Roku 4 now sports a dedicated Ultra HD channel is indicative of the growing prevalence of the super high-quality format, with Amazon offering 4K for its video-streaming service, and Netflix doing the same.

The device also now offers a neat new remote finder feature, which could prove very useful for anyone who regularly misplaces their remote around the house. All you do is press a button on the Roku 4, and you can hear where the controller is.

Alongside the new device, Roku is also rolling out a new operating system (OS) today. Roku OS 7 now lets you follow movies, TV shows, directors, and actors, so you can be notified when related content is added to a service on Roku.

Then there’s a new feature that lets you connect your Roku device to Wi-Fi networks that require you to sign on through a browser, like Wi-Fi you typically find in hotels and cafes.

The $130 device is available on pre-order today through Roku and other retailers, and is expected to start shipping on October 21. It will be in stores from late October.