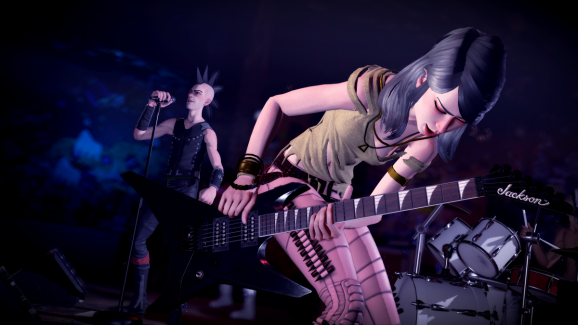 Rock Band's characters do a great job of matching their movements with the game's songs.

A new Rock Band game is out this week (read our review of it here), and it’s the first one we’ve had in five years. Rock Band 3 came out in 2010, and the series’ immense downloadable content offerings stopped trickling out mid-2013 (then returned earlier this year). Rock Band 4 should bring with it another long, healthy round of DLC, and I’m eager to see what Harmonix does with their reinvigorated campaign.

The return of DLC also means people will once again incessantly request that their favorite songs make it into the game. After playing a ton of Rock Band 4, I have a few ideas of my own. In general, I’m hoping Harmonix uses the return of their best series to break genre molds as much as possible and add music people wouldn’t think would necessarily fit a Rock Band game. The songs I’m suggest don’t always fit the Rock Band mold, but that’s the point. If Rock Band’s going to reach new audiences, it’s going to have to use new music to do it.

Viet Cong belongs in a Rock Band game, but I can understand why they’ve been left out. They’ve only been around for one album, and their history (half the band is from the post-punk group Women) is more obscure than might fit Rock Band. Their sound also lines up with what people expect from the game already, but it’s not as friendly as a lot of modern rock bands. People will have a harder time listening to the sample that plays when looking through DLC in the game’s store and get a feel for what they’ll be playing; keys, rhythms, and tone change so often in a Viet Cong song that the sample may not represent the song as a whole. That said, “Bunker Buster” is the most approachable song off the band’s latest self-titled album, and I think it could pave the way for Harmonix to include an even wider range of rock music in the game.

Most beats in hip-hop don’t fit Rock Band. Either they contain no guitar or “real” drum beats at all, or the ones they do have loop endlessly in order to drive attention towards the rapper or group’s lyricism. None of this is the case for “Blockbuster Night Part 1,” as El Producto’s beats line up perfectly with the kind of song we’d expect from Rock Band DLC. The audience for Rock Band and Run the Jewels also lines up more than you’d think, and I imagine it’d be a popular download for a lot of fans.

“Under Control” By The Internet

Like hip-hop, you wouldn’t expect R&B to make the cut when it comes to providing solid drum, bass, and guitar rhythms, but The Internet infuses so much soul and funk into their albums that quite of few of the songs from their latest album, Ego Death, could easily slide into the Rock Band mold. “Under Control” provides just enough energy to transition people from one song to another like you would in a regular playlist. It can scale up or down. It’s also just a good song.

I’m surprised we haven’t seen any song from Arcade Fire in Rock Band thus far. Maybe it’s the band shying away from larger exposure, wanting to remain “indie” even as they win Grammys? Whatever the reason for their absence, now’s as good a time as ever for them to make their debut. If the Black Keys can get away with it, so can Arcade Fire. And “Reflektor” is the kind of seven-minute odyssey where you won’t mind not playing your part for a little while.

I’ll be the first to admit that if Childish Gambino (aka Donald Glover) comes to Rock Band, it’ll have to be via one of these variety packs featuring other artists to mix it up. Most of his songs simply don’t fit. But “II. Shadows” is not only one of Gambino’s best songs, it’s also one the one most suited Rock Band. It has a relaxing, notable guitar loop, some impressive drumming, and the most appropriate lyrics (save for some light cursing). Childish Gambino is probably many kids’ favorite rapper, and he should find a home with some of the game’s younger fans.

“We Were Rock & Roll” By Janelle Monáe

Harmonix teased us by including a song featuring Janelle Monáe in Rock Band Blitz (“We are Young” by Fun), but I’m hopeful that someday they’ll add a proper song of hers, and “We Were Rock & Roll” fits in nicely with the rest of Rock Band. Rock Band sorely lacks black musicians (especially modern ones), and having a upbeat, heavy-tempo song like “We Were Rock & Roll” would be a nice way to appeal to new audiences and showcase more diverse talent, especially considering black musicians’ role in establishing rock as a genre in the mid 20th century.

“Graceless” by The National

This is another band that I’m surprised has yet to make it into a Rock Band game (maybe lead singer Matt Berninger is one of those guys who thinks music games detract from learning to play real instruments?). The National seems like an easy addition, and “Graceless” is probably their most friendly song for the game, as it starts with a active introduction and builds its momentum throughout. It’s either this or “Bloodbuzz Ohio,” but I’m guessing the more recent song would take precedence.

“Under the Pressure” by The War on Drugs

“Under the Pressure” is already in Guitar Hero Live, but I specifically want it in Rock Band because the song’s drum section sounds ridiculously fun to play. I’d also argue that it’s a better fit for Rock Band than Guitar Hero, since it plays to the former’s more lax nature instead of Guitar Hero’s more skill-oriented focus.

If you want to introduce an audience that listens primarily to rock music to hip-hop, Kendrick Lamar should be among the first artists you use to make the introduction. Lamar’s latest album, To Pimp a Butterfly, displays a musical craftsmanship few albums of any genre can muster, which should appeal to any audiophile worth their salt. “King Kunta” is also a hit in its own right and could bring quite a few downloads on its popularity alone.

“New You” by My Bloody Valentine

My Bloody Valentine belongs in Rock Band, and a song from their new album is as good a way as any to do it. I’m guessing most My Bloody Valentine fans would simply prefer all of the Loveless album make it up on the store, but I imagine they’ll take anything they can get. They can start here and see where it goes.

I want to see tons of other songs make it into Rock Band, but I think these have the best shot at making it in while also expanding the definition of what a “Rock Band song” could be. And if Rock Band hopes to remain relevant in the coming years, that might just be what they have to do: find ways to incorporate more genres than they’ve ever had before.