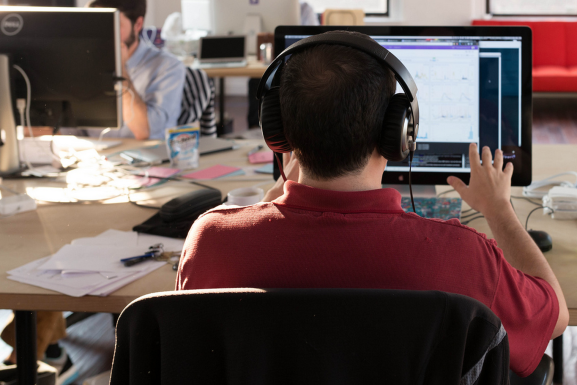 Armed with an idea for a startup, French natives Olivier Pomel and Alexis Lê-Quôc landed in New York City, where they launched Datadog in 2011.

Four years and $53.4 million in venture capital later, the data-analytics company is now trying to find new talent as fast as it can to accommodate its ambitious growth plans. And so the company’s founders are looking homeward in their bid to expand, and announcing the opening of a new R&D center in Paris.

“Paris is home to a number of prestigious universities and engineering schools, which generate top-notch math, sciences and software engineering talent. I am myself a product of this educational system,” Pomel, now chief executive officer of Datadog, said in a press release. ”The goal of our Paris R&D Lab is to attract highly skilled researchers and engineers who want to be part of a high-growth global startup with deep technical challenges and an entrepreneurial culture.”

The move comes on the heels this week of an announcement by San Francisco-based Scality that it is moving its Paris R&D center to new offices to accommodate a massive expansion planned there. Scality is also helmed by a French native, Jérôme Lecat.

This kind of foreign investment is just what French Tech boosters have been seeking as they’ve tried to promote the region’s startup community. But the Datadog and Scality announcements will likely have special resonance with the French cofounders feeling confident enough to invest in their home country after seeking startup glory elsewhere.

“Paris is a major presence on the engineering talent map, with one of the most ambitious and competitive technology industry projects to come out of Europe,” Lê-Quôc said in the press release. “There was never any question that Datadog would ultimately have a presence here.”

In an interview by phone, Amit Agarwal, Datadog’s chief product officer, said the company had been bringing French interns to NYC almost since its founding. The quality was impressive, Agarwal said, and so the company began looking toward Paris as a place where it could attract new talent without necessarily facing the same intensity of competition it faces in NYC and Silicon Valley.

“These interns were super successful for us,” he said. “And we found we could hire a lot more people in Paris without facing the crazy competition for people from Stanford.”

The initial goal is to higher 50 people as quickly as possible, Agarwal said. The company raised its latest round of $31 million back in January, and with a pair of French founders with extensive U.S. connections at the helm, it should be attractive to French engineers.