Barnes & Noble and Samsung have added a new device to their burgeoning range of reader-focused tablets — the $250, 9.6-inch Samsung Galaxy Tab E Nook.

The new tablet comes a month after the duo launched the 8-inch, $400 Galaxy Tab S2 Nook, which followed the $150 Galaxy Tab 4 Nook tablet and $250 10-inch alternative that launched last year. 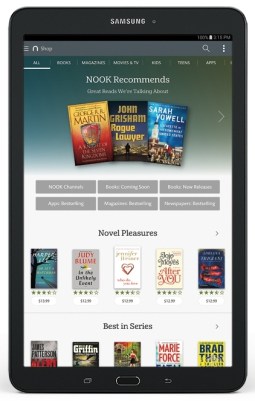 While the latest model sports a larger screen than its predecessor, it is also $150 cheaper, which should tell you all you need to know about its specs.

Indeed, the Samsung Galaxy Tab E Nook sports an HD 9.6-inch display at 12800 x 800 resolution, compared to the impressive Super Amoled 2048 x 1536 QXGA of the Galaxy Tab S2 Nook. The E Nook also only has half (16GB) the built-in memory of its more expensive brother and weighs 10 ounces more, but there is no mention of what processor this puppy packs.

To try to tempt new users on board, Barnes & Noble is also launching a month-long trade-in program (from today), one that could knock $50 off the price of any Samsung Nook tablet in exchange for your old Nook. However, it’s also inviting everyone to trade in their iPads, Kindles, and other Samsung tablets to receive a credit of up to $200, though it’s not clear how many iPad-owners will be willing to make that jump.

While the devices are similar to other Android tablets on the market, these particular versions are laden with reader-focused software from the get-go, including the Nook Shop for buying ebooks and a shortcut function that takes readers directly to their current book.