With all the innovation taking place over the past few years and the shift from desktop to mobile-first, one thing has (hopefully) remained consistent: your phone number. It has become an integral part in your identity, sort of like your Social Security number. And for some people, giving it away willy-nilly just isn’t something they’re comfortable with.

This is the reason for Burner, the mobile application and service that offers you temporary, disposable phone numbers. There’s quite a bit of interest in this idea, so today the company has expanded its offering with four new integrations, as well as a new subscription service.

Your phone number connects you to numerous people and services, which is useful, but it generates a lot of noise. Whether it’s Uber, Tinder, Postmates, Square, Facebook, Evernote, Dropbox, Spotify, or others, countless apps want your phone number, and people can (rightfully) feel anxious about disclosing it. Think about this: When you’re in an Uber or a Lyft, the driver will know your phone number — which some may not feel 100 percent comfortable with. If you have a Burner number, you can use that in an app and remove it when you’re done.

It’s this type of thinking that led to the formation of Burner Connections, which integrates the disposable phone number on-demand service with third-party apps. Today there are four integrations, including Slack, Evernote, Dropbox, and Soundcloud.

In a way, Burner Connections is like an IFTTT channel, but it’s a native integration. Using Dropbox, you can have people text you photos or even leave you a voicemail and have it automatically be stored in a folder — the phone number isn’t directed to your phone, but to your Dropbox account. Additionally, you can store media and voicemail content right into Evernote using this same process. You can also create a bot that sends SMS responses for frequently asked questions, such as what the Wi-Fi password is.

The Slack integration can collect all voice messages and incoming texts into a single channel. Anyone with access to that Slack account will be able to reply. Lastly, with Soundcloud, you can have people send you messages which are then pushed to the audio social network for curation.

It’s likely that more integrations are planned, but what’s still missing is a strong developer ecosystem, as there’s no public API available. The company said that it wants to first figure out the best way to do this over the long term. 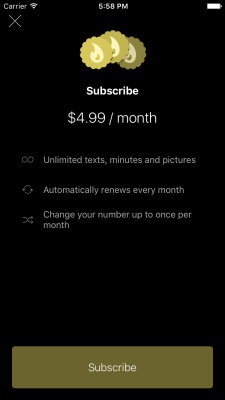 Until today, purchasing a Burner phone number had only been available on an as-needed basis — you were buying credits. But now you can elect to pay a $4.99 monthly subscription fee that gives you a number with unlimited calls, messages, and pictures. This is only available in the United States, Canada, and Australia. If you want another phone number, you’ll have to pay an additional $4.99. Company chief executive Greg Cohn told VentureBeat that Burner may add more subscription tiers in the future.

Why limit people to just one number? Cohn said the average user has one to two Burner numbers and that the primary use is to protect the user’s real number. So far, he said, millions of numbers have been issued to help those participating in the 1099 economy, those looking to replace their second device, and for other reasons.

What makes Burner interesting is that it’s opening up potential beyond what a traditional telecommunications company might be offering. It’s perfectly logical to think that carriers like Verizon, AT&T, and others would be in a position to leverage phone numbers, but sadly this hasn’t been the case. Innovation just isn’t there.

In lieu of that, Cohn and his team are taking over the marketplace with Burner, and they appear to be doing a pretty good job making phone numbers smart.