When I was a kid learning to play chess, I had one big question that never had a good answer: “why?” Why does the horse guy move in an L shape? Don’t horses normally like to move forward? And why can buildings move all the way across the board?

Despite all its structure, chess has no obvious logic behind the movement of its pieces. You can’t work it out on your own. Memorization is step one, but once you know how the pieces move, you know for good. The rest is pure strategy.

Chesh turns this dynamic on its head. It’s developer Damian Sommer’s first mobile release, available on iOS as a universal app (I played on both iPhone and iPad for this review). The co-creator of The Yawhg has made a two-player game that looks and plays a lot like chess, except you can throw memorization out the window: Half of the strategy is learning to move pieces that change every time you play.

A new way to think about a classic game

Chesh has 533 different pieces, but even players with the most eidetic of memories won’t be able to keep track of how they move. The pieces are assigned randomly to each match, and so are their movement patterns.

Chess is normally a game with what’s known as perfect information: Both players know exactly what their opponent has at their disposal. They know the rules. All they don’t know is how their opponent will react. Chesh carries that limitation forward, but it also does away with the comfort of having perfect information. When a game begins, neither player knows what moves will be at their disposal. It’s only through experimentation that this changes, and experimentation comes with no guarantees at all. 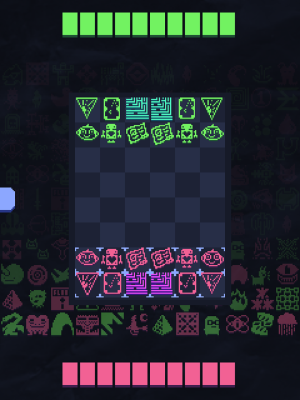 When you tap a piece, every position it can move to is highlighted. That information is helpful but it comes too late. As with its inspiration, Chesh commits you to a move once you touch a piece. If the only spots available already contain your own pieces, too bad. You’re going to have to capture one of them.

This puts the focus firmly on learning. The first player to move knows nothing, flipping chess’s usual first-player advantage to the second player. Once the second player sees how the first move goes, they can use that information to inform their own move — or they can risk experimenting further. Either way, focus is key. If you want to know where your pieces can go, your opponent’s potential moves are as important as your own.

An aggressive player might get lucky and find a great piece to use right away, dominating the board before the other player figures out how to counter. Sommer prepared for that possibility by giving pieces fatigue. Make a couple moves in a row with the same piece and it starts to tremble. You have to let it rest if you want to keep it in play, potentially leaving it open to capture. Decide to keep moving instead and it eventually pops, removing itself from play and taking away one of your lives.

That’s where Chesh leaves its roots behind completely. It has no checkmate. It has are royals (equal in value and identical in appearance), but capturing one isn’t an automatic win. It’s just four lives from your opponent’s pool of 10. Even two royals isn’t a guarantee if you leave nearly every other piece unclaimed.

Because each game is randomized, these rules are vital for Chesh to stay strategic and not just chaotic. No matter how weird the pieces look or their moves are, the foundation is always the same. Lives are removed as pieces are captured. Pieces that move too many times in a row tremble before expiring from fatigue. Pieces that reach the far end of the board can loop back around to the start. All these rules remain true no matter how you play, providing the game with necessary structure.

The rest of Chesh’s structure is a bit more variable. You can choose the width of the board you’ll play on and how many rows of pieces you have to work with. This lets you start a match in a tight hallway filled with pieces, an open field that’s a little too empty, and every variation between.

Chesh also offers three timing options. Blitz Chesh begins with a long timer, its length determined by your board and piece settings. If you run it down before taking out your opponent’s lives, you lose. Bullet Chesh gives you a quick countdown and adds a few seconds back when you make a move. It eats away at your lives if you run out of time. Infinite Chesh gives you all the time in the world — you only need to worry about your lives.

This variety means the game doesn’t easily get boring. If you’re entertained by the concept, you can fiddle with the details until Chesh provides the experience you’re looking for. Strategies that work at one board size may not be ideal for the next, so you can stretch the honeymoon phase out longer than this small game would suggest.

The game can also adapt for red/green or blue/yellow color blindness, so everyone can play on equal visual footing. Equally complicated visual footing, that is: Sommer tapped dozens of artists and friends to create their own pixel-art pieces, so matches can get busy. But hey, is it much more confusing to play with spooky ghosts, Illuminati pyramids, and confused snails than it is to play with pointy-hatted bishops, horse-headed knights, and a pair of animate crowns?

I can’t get enough of the strange collections of pieces I can play with each match. Chesh’s stark visual contrast, bright colors and pixelated style may prove divisive, but with Ryan Roth’s moody score, they’re an ideal accompaniment to a game that feels familiar in an entirely off-kilter way.

Your choice of opponents

Chesh offers three ways to play: solo versus A.I., against another player on the same device, or through Game Center. I wasn’t able to try out the online matchmaking during the prerelease window, so I spent my time playing with friends and friendly robots.

The local multiplayer experience is what you’d expect. The board is laid out so both players can see their own lives and timers from the right angle. The pieces on both sides of the board are in the same orientation, so one player will see them effectively upside-down, but reversed pieces would make it much harder to understand the moves being played. Its randomness already has enough potential to frustrate; there’s really no need to make the second player’s experience more difficult.

The computer needs no such coddling. Easy A.I. does what it sounds like, overcommitting at times and making moves that force it to capture its own pieces at others. Standard A.I. is more calculating, forcing you to take much more care. It’s skilled, but A.I. just can’t share the fun of discovering moves together. That’s one excellent reason to play with a buddy if you have one handy.

A few points of friction

Chesh is a simple, well-designed game, so it doesn’t have many serious flaws to worry about. Frustration is the biggest offender. On smaller devices, the tap targets are small enough that you can mess up — particularly if you try to crowd two players over one tiny screen. Since touching a piece commits you to moving it, you may occasionally wind up cornered into capturing one of your own pieces because you tapped a few pixels off your target. From experience, that’s not a good feeling.

The randomness can also frustrate at times. Available moves vary wildly — some let pieces cross the board in several directions, while others are limited to tiny nudges one way or another. Both players have the same moves available so this is never unbalanced, but it slows way down when too many pieces are stuck with short-range. You can’t get into the flow when your pieces are shuffling across the board and blocking each other in.

Chesh hearkens back to those moments when you first learn the rules of games like Chess, when you need to put your faith in design over logic. It’s like learning language from scratch each time you play, piecing together unfamiliar sounds until they form up into words. Randomization results in an inconsistent experience, but it also makes the game reward giving it your full attention. Too few mobile games are willing to risk that.

Rather than stepping in as the next chess — that would be a lot to ask of any game — Chesh deconstructs one small piece of that classic and turns it into something new. So grab a friend, drop an iPad between you, and learn a different game every time you play. Chesh makes the uncertainty fun.

Chesh was released for iPad and iPhone on October 8, 2015. The developer provided GamesBeat with an iOS copy of the game for the purpose of this review.