It’s a big, weird world out there for must of us big ol’ homo sapiens, but imagine what it’s like for a tiny, 4-inch tall sentient helper robot.

Despite its diminutive stature, Chibi-Robo has a big heart — its existence is all about making the world a happier place. Which is why, upon hearing that miniscule extraterrestrials are sneaking away with the Earth’s vital resources, Chibi-Robo and its microcomputer sidekick, Telly, halt their satellite cleaning gig and beam down to earth to help out.

Nintendo and developer Skip have spent quite some time puzzling out how to elevate their tiny Chibi-Robo character into the upper echelon of Nintendo franchises. Though the little robot has been around since the GameCube era, the games have never quite “hit” as well as other Nintendo-published offerings. Zip Lash is looking to change this by dramatically altering the formula: Instead of a 3D adventure where Chibi-Robo aids with various care-taking duties, this is a side-scrolling platform/action game in which our metal hero uses its plug to take down a wave of tiny alien invaders. Prepare for grappling, swinging, hovering … and collecting plenty of snack food.

Chibi-Robo itself is a simplistic design, lacking even a mouth, but its movements and special animations manage to convey a great deal of quirky personality. The same goes for the various toy NPCs and enemies you encounter. While the visual elements of the various stages aren’t complex, they work well with the game’s overall aesthetic of being a tiny little robot in a great big world. Don’t forget to pick up lots of trash to make the levels look even prettier (and to save extra energy).

The Zip-Lash mechanic is unique

Many side-scrolling action games use grappling as a core mechanic, ranging from the well-known Bionic Commando series to the more obscure Umihara Kawase. Chibi-Robo’s plug has a few quirks. By pressing Y, Chibi-Robo pauses and charges up a weapon called the Zip Lash. This is more powerful than the standard plug strike, allowing Chibi-Robo to smash larger obstacles and providing for better aiming. As it gathers up blue power-up spheres in each of the stages, the Zip Lash line grows longer and longer. Eventually, its length will be long enough to allow you to ricochet it off numerous walls, letting you snag items and reach grapple points in areas a great distance away. Getting a handle on the Zip Lash mechanics is crucial, and the bonus stages will reward you well for using the plug’s wall-bouncing properties to snag everything in sight. 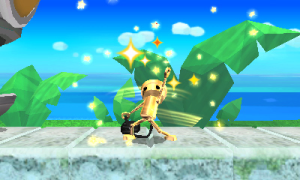 Above: Chibi-Robo’s gone gold! In the literal, powered-up sense.

A Chibi-Robo Zip-Lash bundle includes a Chibi-Robo Amiibo. If you have a New 3DS or a NFC reader, you’ll definitely want to spend the extra $10 to pick this up. Not only is the figure itself really nice, it also does some neat stuff in-game. For starters, you can use it to access a little machine that will spit out (in-game) collectible figures and other bonuses in exchange for the coins you collect. You can also use it during levels to transform into Super Chibi-Robo a set amount of times per day, giving the little robot a serious boost in speed and power. Finally, you can “level up” the figure by transferring scores you earn at the end of stages to the Amiibo, which ups the rarity of the figures you can try for and increases your daily Super Chibi-Robo use.

Yes, really! Chibi-Robo and his friend Telly are horrified to discover that the alien invaders are hoarding the world’s snacks and candies along with its resources. Every stage has one or two treats to recover among its array of collectibles. These aren’t just generic sweets and cookies, however — they’re all well-known snack food brands from across the globe, complete in their authentic packaging. A few characters you meet throughout will reward you with money for passing the snacks on to them and give you a bit of history of the treat. I recognized many of the North American and Japanese snacks, but it was fun finding European and Asian brands I’d never encountered before. (I learned about the origin of Tootsie Rolls as well.) 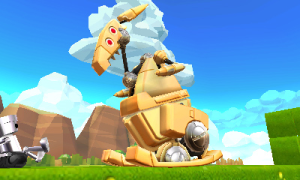 Above: The elaborate boss designs are a highlight of the game.

When you clear a stage, you don’t automatically move to the next level. Instead, you spin a wheel which determines which stage in that area you’ll head to next. Since the stages are arranged in a circle, you’ll wind up looping around until you’ve managed to land on and complete all the stages in an area, upon which the boss encounter will open. This means your progression is highly randomized, and that you can’t choose whether or not you want to revisit stages: sometimes you’ll be forced to replay one if you land on it. (You can only revisit an area’s stages freely once you complete the boss level.)

You can attempt to “rig” the wheel by purchasing panels that correspond to where you want to go and/or by hitting a specified UFO target at the end of levels (hitting silver and gold UFOs allow you to re-spin once and twice, respectively). This works, but it’s expensive, time-consuming, and ultimately not fun. Why the developers shied away from linear progression is a complete mystery.

Chibi-Robo runs on a battery charge, which depletes over time and when it’s damaged by enemies. When you lose all of your charge, it’s game over — you’ll need to use some of the stored energy earned by burning collected garbage to restart the stage … from the beginning.

Yes, while the levels do have checkpoints, they only exist for recovery from mistakes like falling into pits (which costs a decent chunk of energy) and failing certain puzzles. If you run out of juice, you’re starting completely from scratch. Some stages are devoid of checkpoints entirely, meaning any failure is an automatic game over. 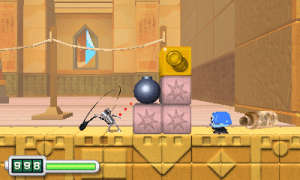 Above: Don’t play with explosives. Unless, of course, you need to proceed.

Lots of little frustrations are scattered throughout

Sometimes, things in Chibi-Robo just don’t make sense. Every so often, you’ll swing your Zip Lash at a point the in-game guide bar assures you you’ll hit, only to barely miss it. During timed bonus stages, where you have to collect all the objects in a room, stuff you pull toward you with the Zip Lash doesn’t count as collected until it touches Chibi-Robo’s body, making you lose some bonus stages even though you technically got everything in the allotted time. You also can’t redo those bonus stages (and get another chance at the snack collectibles) unless you restart the entire level, and the pause menu lacks a “retry stage from beginning” option. Revisiting the NPCs you deliver snacks to involves trudging through completed levels over again.

Stage design can very wildly in quality, as well. It has a lot of great levels, but it also has some really bad ones that can sour your mood in an instant. Almost anything involving a special vehicle, for example, will suffer from slow, unresponsive controls and obnoxious gimmicks that will tempt you to use the “pay in-game money to skip the stage” feature.

Chibi-Robo: Zip Lash is a solid little platformer that entertains despite faltering at times. It’s cute, it’s charming, and it offers some nice little twists on the 2D action/grappling formula that make it stand out. Be warned, however, that you will likely come out of the experience with a serious sugar craving. (I want to try some of the tasty-looking German candy I collected, but I don’t know anywhere around here that would carry it. Argh!)

Chibi-Robo! Zip Lash is out October 9 for Nintendo 3DS. The publisher provided GamesBeat with a copy of the game and the Chibi-Robo Amiibo for the purposes of this review.