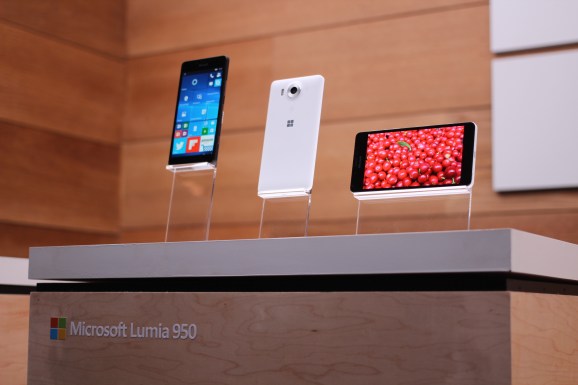 Microsoft this week unveiled its flagship Windows 10 Mobile devices: the Lumia 950 and Lumia 950XL smartphones. While the initial response to the devices was mildly positive, that all came crashing down when Windows Phone fans in the U.S. learned there was rumored carrier exclusivity in the works. We reached out to Microsoft, and the company confirmed that this is, indeed, the case.

“We’re refocusing our channel strategy, narrowing it in the short-term and planning for broader operator availability long-term,” a Microsoft spokesperson told VentureBeat. “While there was interest across the board from U.S. operators, currently we’ve made the decision to have AT&T carry the Lumia 950, and then sell both the Lumia 950 and Lumia 950 XL unlocked through our own channel in Microsoft stores. In Europe, Deutsche Telekom will carry the Lumia 950 and Lumia 950 XL, and we’ll have more to share about other carriers shortly.”

The “interest across the board” is something we specifically asked about, given a CNET report claiming that “none of the other [carriers] were biting.” T-Mobile CEO John Legere took particular offence to this notion:

This is total bullshit… @Microsoft made the old school Amazon Fire phone like exclusive decision.. Not us https://t.co/oHBCGljRIC

To be clear: We did not turn down the new Windows devices. MSFT gave to AT&T. If @microsoft wakes up, we'll talk about @TMobile carrying

Unfortunately, it appears that Microsoft is choosing to shoot itself in the foot. Leveraging only AT&T’s channels is not enough nowadays, especially if the carrier is only going to be selling one of the two new flagship phones.

Phones that sell well in the U.S. typically launch on not just the four major carriers, but often smaller ones, as well. This is necessary to achieve wide distribution, even though AT&T is probably promising a marketing blitz in return for the exclusivity.

It looks like Microsoft simply doesn’t have the high hopes for these devices that Windows Phone fans would have liked. Maybe the real push for Windows 10 Mobile will have to wait until that rumored Surface phone arrives.

Update on October 9: MobileSyrup is reporting that no Canadian carriers will carry the Lumia 950 nor the Lumia 950 XL. Purchasing straight from Microsoft will be the only option for Canadians, until further notice.