I rarely play as mages or wizards in role-playing games because I’d much rather be on the front lines with a sword and shield. But Spirit Hunter shows that hooded magicians can be badasses, too.

Developer Boomlagoon’s latest game (out now for free on iOS devices) is about a lone mage who must repel an invading army of demons by sealing spirit gates around the world. Instead of casting magic spells from a menu, Spirit Hunter uses a deck of cards that contain spells and abilities you can sling at your enemies. It’s more of an arcade game than a full-blown RPG, using familiar free-to-play mechanics like timers and an energy meter that limits how long you can play. But it also has a lot of depth thanks to a simple crafting system that allows you to make better equipment and spells.

As long as you don’t mind the barebones story, Spirit Hunter has plenty of content to keep you busy.

Check out our Reviews Vault for past game reviews 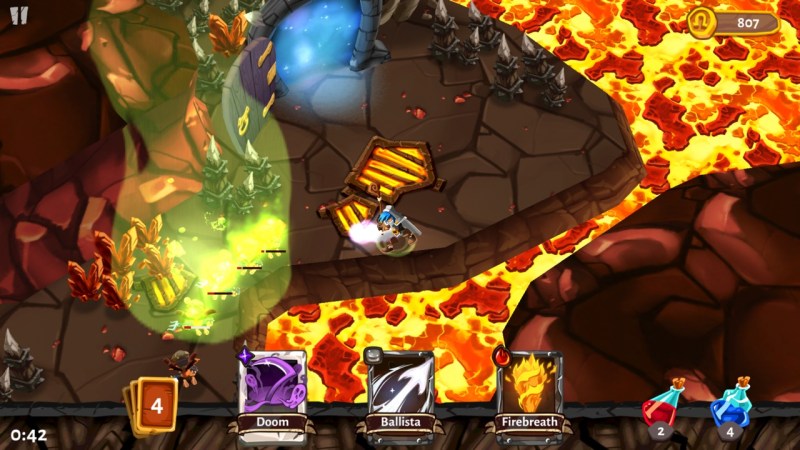 Above: You have to make do with a limited number of cards.

The collectible card aspect of Spirit Hunter adds some randomness to its battles. You never know which cards will show up in your hand. It can be annoying at times — like when I got three melee attack cards in a situation where I really needed a ranged spell — but you can increase the likelihood of certain cards showing up by crafting more of them for your deck. Between that and the deck’s limited size (it increases the more you level up your character), Spirit Hunter forces you to be creative with the cards you do have.

As the deck grows bigger, you’ll also need to start tailoring it for specific encounters. Battles that take place in the lava areas, for example, usually have a lot of fire-resistant enemies, so I’d swap my fire cards with something else before going in. Other levels might have a lot of ranged fighters, a group of healers, or dozens of small creatures to overwhelm you.

That uncertainty is what keeps the game from feeling too stale or boring. It made each battle feel slightly different, which helps when you’re playing them over and over (repeating content is inevitable if you want to get the daily experience bonuses). If a level was too hard, I’d adjust my deck and try it again. If my character’s stats were just too weak, I’d play other levels for a while until I could buy or make better gear.

Creating your own spell combos

Growing your deck and collecting more types of spells give you more room for experimentation. After my deck grew past 13 or 14 cards (it’s now at 19), I started to be more careful about which types of cards to include. A lot of those decisions came down to cool card combos I stumbled on in combat. It’s satisfying to lure enemies into a Poison Fog and then paralyze them with a Shockbolt, which gives the poison more time to drain their hit points away.

Another effective combination is to use the ice spell Chill to slow down large groups and then whack them all with your staff with Cleave. I’m sure I’m missing more, but those are the two that I relied on the most.

I foolishly thought I could play everything in Spirit Hunter before writing this review. But after playing it several times a day for two weeks, I only have a level 28 mage (out of a possible 69) with few high-powered spells. And judging from all the clouds left on the world map, I still have a lot more areas left to unlock. 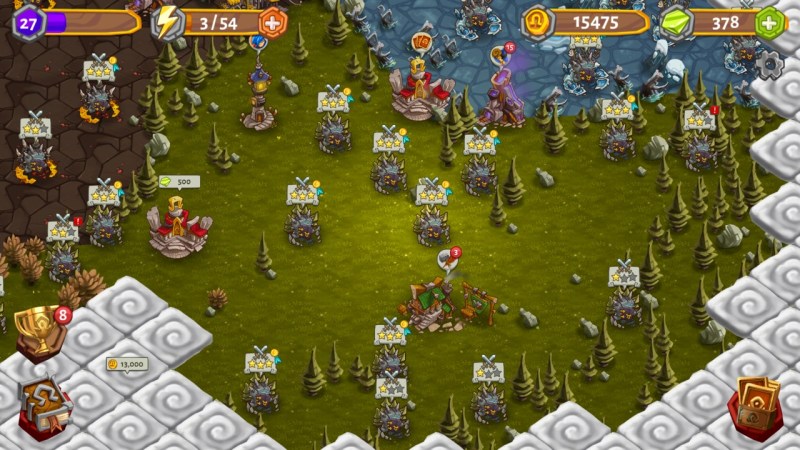 Above: Spirit Hunter’s world slowly expands as you level up and spend more gold.

It doesn’t really have a story

Given its RPG influence, I thought Spirit Hunter would have some kind of story that I’d uncover as I kept playing. But aside from a few lines of text you see at the beginning, it doesn’t really tell you anything about its world or the character you’re playing as. It’s not that big of a deal — “demons are evil” is a good enough reason to seal those gates. But it is weird how I’m the only one actually doing this. What happened to all the other mages?

When your cards block your attacks

You can’t tell from the screenshots, but the three cards at the bottom of the screen will give you plenty of problems in some of the smaller levels. They’re nice and big so you know what spells you’re using and can easily slide them onto the battlefield. But they make it almost impossible to attack monsters who are coming from below. One of two things would typically happen to me: Either my cards would return to my hand, or I would accidentally waste a precious spell by casting it on an empty patch of grass.

They also make it hard for you to escape when you’re surrounded and have no place to go but down. I died so many times like this because the mage just couldn’t move anywhere.

It doesn’t take long before you start earning or crafting duplicate spell cards, and it’s hard to tell which one is stronger than the other just by looking at them. It took a few days before I was able to tell the difference. All the low-level cards have flimsy looking borders with cuts around the edges. As they get more powerful, the borders look more like stone than paper, and transition from a pale white color to a dark gray (which is confusing because the original borders also have a dark color).

It isn’t until the cards reach level 20 or so that they get special gold trimmings that make it easier to tell them apart. 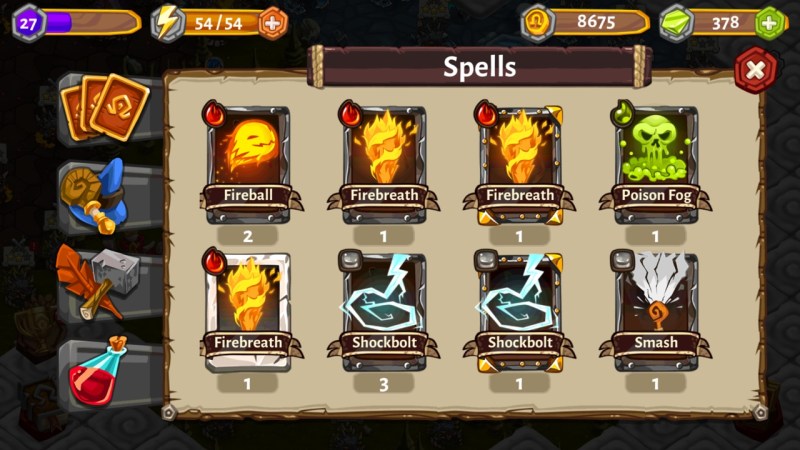 Above: Card designs become fancier the more you level them up.

Separately, the RPG and collectible card components aren’t unique. You can find plenty of mobile games in those genres. But when they’re together in Spirit Hunter, it feels like a completely different game. The lack of a story is a bit of a bummer, and its user interface could still use some work. But even with its problems, Spirit Hunter is a refreshing change of pace from the strategy games and match-3 puzzles that usually clog the App Store.

Spirit Hunter is out now for iOS devices. The developer provided a download code prior to the release of the game for the purpose of this review. 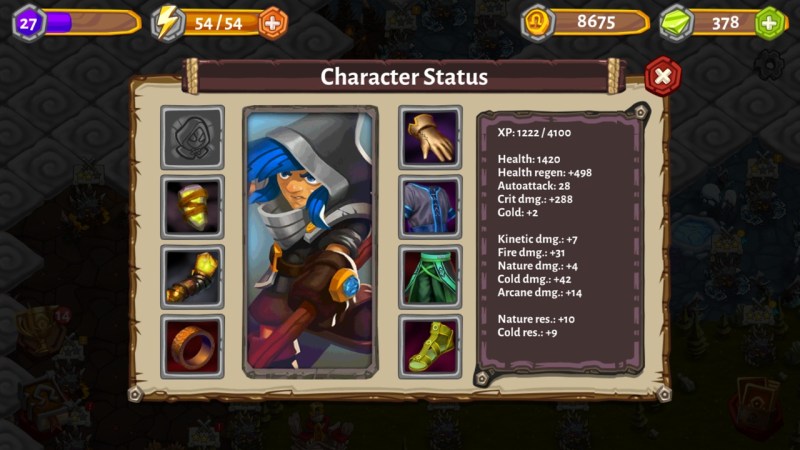 Above: Spirit Hunter is stingy when it comes to giving you new hoods.