The Google Cloud Platform directly competes with Amazon Web Services, so this is pretty interesting. 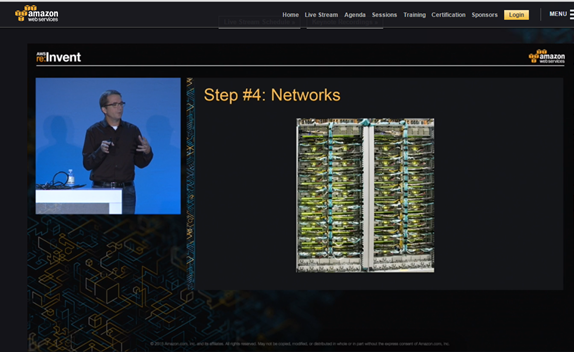 Above: Jerry Hunter showing off Google networking infrastructure during a talk about Amazon Web Services’ infrastructure at the 2015 AWS re:invent conference in Las Vegas on October 7.

Google has been showing off its networking equipment lately. The photo of Google’s Jupiter switch fabric that showed up in Hunter’s talk was first shared publicly at the Open Networking Summit in June 2015, when Google technical lead for networking Amin Vahdat gave a talk. Above: Amin Vahdat, a Google Fellow and Google’s technical lead for networking, talking about Google’s Jupiter networking block at the Open Networking Summit in Santa Clara, California, in June 2015.

Hunter’s use of the image came during his presentation entitled “Innovation at Scale” on October 7. Urs Hölzle, senior vice president for technical infrastructure at Google, published a Google+ post about the incident yesterday, crediting Timothy Prickett Morgan of The Platform for the discovery. Of course, Hölzle took this as an opportunity to talk up Google:

One more reason to be certain that +Google Cloud Platform​ has the world’s best infrastructure: while bragging about their network, a competitor shows images of Google’s network. … Thanks for the acknowledgment, +Amazon Web Services​! But next time please show our logo on the slide :-)

Update at 1:20 p.m. Pacific: Amazon marketing manager Jim Sherhart, one of the people who worked on the presentation, just commented on Hölzle’s Google+ post, suggesting that this was nothing more than an accident.

“This was my mistake,” Sherhart wrote. “Because we have a lot of IP in our datacenters, we don’t typically show images of them in presentations. I just grabbed what I thought was a generic stock photo from Google Search since it had no branding, trademark, or meta identification. I’ve replaced the image in the presentation. Happy you guys were watching re:invent though :)”