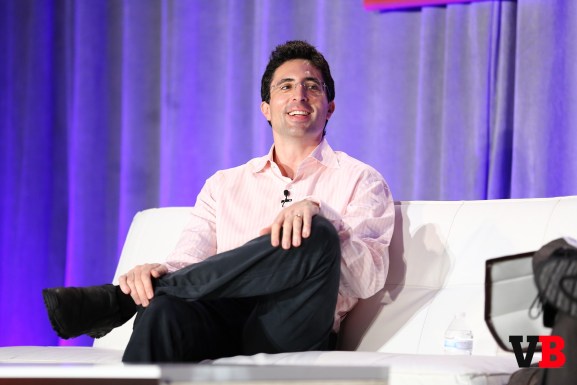 SAN FRANCISCO — Mobile games love to attach themselves to film brands, but celebrities may be the better bet.

Glu Mobile CEO Niccolo De Masi spoke about the company’s celebrity-based strategy onstage at GamesBeat 2015 today. Glu Mobile made it big with Kim Kardashian: Hollywood, which has more than 35 million downloads. That makes it a hit in a mobile market worth an estimated $30 billion this year, according to the researchers at Newzoo.

De Masi approached Kardashian in early 2013. He took her brand and added it to the model already created for past games based around acquiring fame. Glu has kept the game fresh by updating it and keeping it current with Kardashian’s life.

“Kim and I have been the innovator for this category, and we think it’s here to stay,” De Masi said.

Previously, De Masi said that many of Glu’s games focused on shooting and other male-oriented activities. After the success of Kim Kardashian, Glu is now working on a Katy Perry game.

Glu is working on other celebrity-based games, including an action one with actor Jason Statham. It has also created titles based on film franchises like James Bond and Mission Impossible. De Masi said that building games based off of celebrities actually brings more built-in awareness, stating that people have more affinity for a real, breathing person than a film series. Celebrities also have more followers on social media, which allows them to easily promote their games. So, making a celebrity-based game gives developers more of a marketing boost than even movie-based ones do.

De Masi said that the celebrity gaming area won’t be a “winner taker all” arena, although one title might take most of the revenue generated by the category. He notes that it’s important for developers to identify their audiences.

As for a celebrity that De Masi hasn’t signed that he wants, he mentioned stars like Taylor Swift and Vine Diesel. He wants partners that want to build a game appropriate with their brand and that have large social followings. It’s not about just signing the biggest celebrities.