Adding a few more quests to a game as massive as The Witcher 3: Wild Hunt doesn’t sound all that exciting. Even though it came out in May, a number of players probably haven’t seen everything it has to offer yet — and might not ever, considering it would take a ridiculous amount of time to do so. What’s a few more quests going to add to the experience?

Wild Hunt is dense with stories, moments, and secrets that make its world feel worth exploring. You can find meaningful moments in crowded cities like Novigrad or forgotten countryside landscapes.

So, what do you do with an expansion pack?

With Hearts of Stone, an expansion for the Witcher 3 out tomorrow for Xbox One, PlayStation 4 and PC, developer CD Projekt Red uses the fantasy setting as a springboard to expand the reach of its world, dig deeper into topics Wild Hunt only skimmed, and create an even richer, more fulfilling world to explore.

Hearts of Stone is everything you could want in an expansion to a title that was more about what you found than what you did. 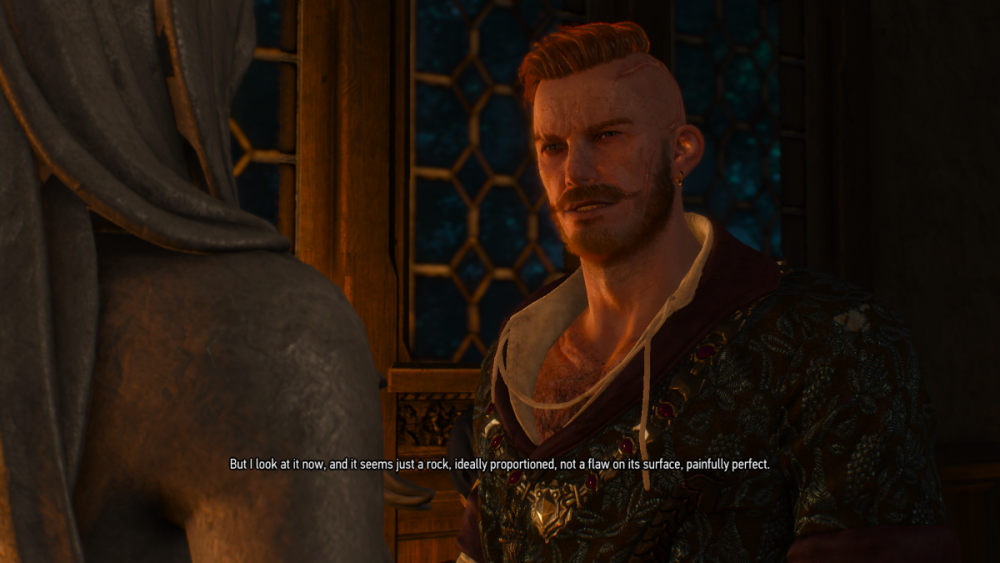 Above: Olgierd Von Everec acts as your main quest giver in Hearts of Stone.

Some of the best ‘Witcher’ yet

What makes The Witcher 3 seem so much larger and more captivating than any other open world are the stories it tells, not the world you inhabit. On a purely technical level, many of the quests are about going from one location to another and either fighting a group of soldiers/monsters or locating an object, and then bringing it back to someone. But the effort put into cutscenes and characters creates a genuine sense of empathy, and it makes each of these tasks (except the treasure hunts) worth doing. Some quests are better than others, but few left me thinking my time would have been better spent elsewhere.

Hearts of Stone doesn’t lose a step. When you load up the expansion pack, you’ll have a quest to visit a notice board, where someone has put out a bounty on a monster hiding in the sewers. This quest eventually breaks down into three major subquests, and CD Projekt uses each of these disparate parts as a way to break out of the typical fantasy mold and try something new. The tone of these quests vary wildly, feeling like a romance novel or sitcom at certain points to having the vibe of a Lovecraftian horror-and-heist plot during other parts. Even with the different moods, these parts all tie together and continue to demonstrate what makes The Witcher 3 such a great offering: its combination of diverse subject matter and ability to bring a sense of humanity to its characters.

The plot falters a bit toward the end with some inconsistent writing, but as a whole, it stands up with some of the best quests in the entire series. It evokes, for the most part, the much more dire tone of stories like The Bloody Baron quest line or the first encounter with the Three Sisters. These quests would either create scenarios that introduced palpable, real-world issues and morality into a fantasy setting, or alluded to that same setting’s more mysterious aspects, letting us know that the world we inhabited was far larger than we could ever hope or comprehend. It’s something Wild Hunt’s original quest line lacked later on as it began focusing on larger conflicts that favored advancing the plot, so it’s great to see the new content return to world-building. 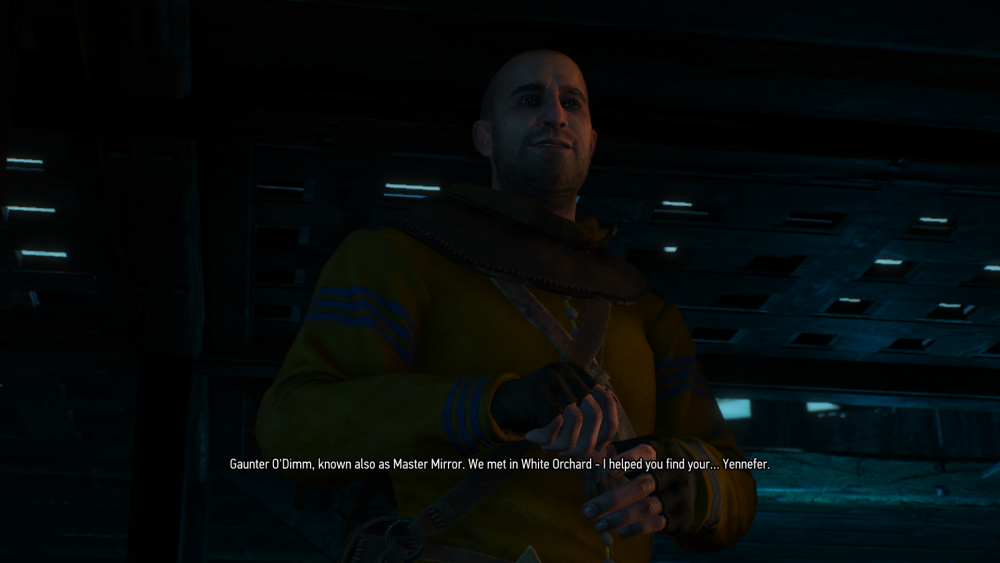 Above: Gaunter O’Dimm had a fairly minor role in Wild Hunt, but he makes a more impactful return in Hearts of Stone.

Hearts of Stone introduces a number of new characters, and almost all of them are worth meeting. Shani might be the character longtime Witcher players might look forward to seeing most, but it’s another returning character, Gaunter O’Dimm, who steals every scene he’s in. He chews scenery like a veteran actor, and setting him up in the early parts of Wild Hunt in a minor role then making him a major player in Hearts of Stone is a clever setup.

And in another universe, new character Olgierd von Everec could have been the expansion’s protagonist. The expansion’s main quest delves into his backstory and presents it in a surprisingly thorough way, revealing a few parallels between him and Geralt. He’s not the best character (the story tends to want you to root for him despite how much of a jerk he is), but he’s given most of the spotlight. Whether you like him or not, you get to know him well, and it speaks to the writing that I loved to hate him rather than hated to see him.

The smaller scale of Hearts of Stone means it tells a shorter story, which might sound a bit at odds with the original content. Wild Hunt worked well in part because of its enormous scale, telling stories that became more powerful because of their length. For instance, depending on how many side quests you do, finding Ciri (the objective of the game until that point) can take dozens of hours, which makes the moment you finally find her more powerful than if you’d found her, say, an hour in.

But Hearts of Stone works well within its structure because you aren’t sidetracked with other quests, building new armor sets, or wondering what you should do next. It delivers moment after moment in quick succession, making it feel like a movie version of Wild Hunt’s episodic saga. This is more intense, fast-paced plot, so don’t be surprised if you find yourself finishing half the expansion in one sitting.

One of the new armor sets in Hearts of Stone is fairly gaudy, if you’re into that sort of thing.

The unnecessary amount of combat

Hearts of Stone spends a lot of its time putting you in situations where you’re not actively fighting anything for hours, and it’s better for it. The early combat encounters fit in quite well, too. Toward the latter end of the main quest line, however, you encounter seemingly random battles that don’t fit in at all, as though someone felt it would be boring if Geralt wasn’t fighting monsters every few minutes. All this fighting isn’t interesting in the least, and the story actually points this out before quickly dismissing it.

The encounters are harder, which might appeal to some players who thought everything was too easy, but aside from those early fights, the combat feels stale and unnecessary.

In Hearts of Stone, you can speak with a certain character and pay him to open a shop and then talk to him to replace three upgrade slots on your swords or armor for a single trait, called a runeword. These runewords can drain your Adrenaline meter for increased Vitality and Stamina regeneration or have each fatal blow increase your Stamina, but I didn’t feel like any of them were worth putting on my weapons — except for the one which automatically deflects arrows.

Considering I ended up spending almost all of the money I’d acquired throughout my time with Wild Hunt in order to get that one runeword, that’s a huge disappointment. Runewords are not terrible in practice, but you could easily do without them.

Hearts of Stone also introduces a few characters from the land of Ofir, most of which have the interesting linguistic habit of switching the objects and subjects of sentences — like Yoda from Star Wars. Their introduction makes the world of The Witcher seem as large as it should be, since we didn’t see characters from other kingdoms in Wild Hunt. But they’re terribly underused and marginalized, responsible for only a single plot point in the expansion’s quest line and as the shopkeeper in charge of selling you runewords. It’s nice to see more diverse characters, but their inclusion reeks of missed opportunities.

Hearts of Stone is a collection of some of the best quests The Witcher 3 has to offer. Its story is cohesive; its characters are worth meeting; and the thematic diversity is worth seeing. If you’ve already beaten the original experience, these quests are worth checking out. If you haven’t, make these quests a top priority.

They feature some of the best writing in fantasy games, period, and make the expansion more than a worthy addition to one of the best releases of the year.

The Witcher 3: Hearts of Stone is out October 13 for PlayStation 4, Xbox, and PC. The publisher provided GamesBeat with a prerelease version of the expansion for this review.