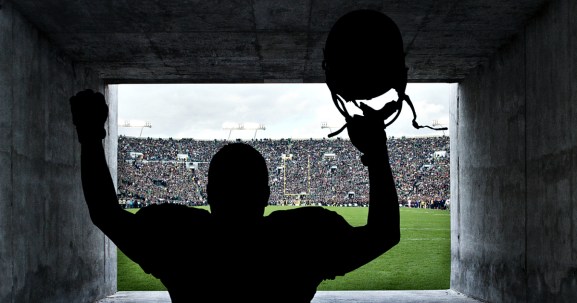 Twitter has been coming down hard on accounts that share GIFs or video footage of sports highlights without permission. It temporarily suspended the @Deadspin account on Monday, and the @SBNationGIF account is still suspended at the time of writing.

While the @Deadspin account is again active, Twitter has forcibly removed video content from its feed following complaints from the National Football League (NFL) that the account was violating its copyrights. The account @SBNationGIF, meanwhile, was censored for sharing GIFs of college football highlights.

Just got a statement from the NFL re @deadspin twitter suspension: pic.twitter.com/buB6tb3DSH

Far from contrite, @Deadspin mocked NFL Commissioner Roger Goodell upon the reactivation of its account:

Below is the notice that was sent on behalf of the NFL requesting the removal of copyrighted content (as shared with VentureBeat by a Twitter spokesperson):

To Whom It May Concern:

This letter is to notify you, pursuant to the Digital Millennium Copyright Act (“DMCA”), 17 U.S.C. 512 et seq., and other applicable statutes and laws in your jurisdiction, that your website is infringing copyrighted materials owned and/or controlled by the National Football League (NFL).

As you may be aware, the NFL owns and/or controls the worldwide rights to license intellectual property of the NFL and its Member Clubs, including, but not limited to, moving images and other audio/video content featuring NFL game action and/or other NFL programming (collectively, “NFL Content”), and the copyrights in and to the NFL Content.

Accordingly, the NFL requests that you act expeditiously to disable access to the unauthorized videos being displayed and/or disseminated on the web pages listed below and remove its contents from view.

I hereby state that the NFL owns and/or controls the rights referenced above and that NetResult Solutions is authorized to act on the NFL’s behalf with respect to internet monitoring, enforcement, and compliance.

On behalf of the NFL, I hereby state that I have a good faith belief that use of the NFL Content in the manner complained of is not authorized by the NFL, its agents, or the law.

And here’s Twitter’s statement to VentureBeat:

We don’t comment on individual accounts… We submit all actioned takedown notices to the Chilling Effects Clearinghouse, and these batches should be posted later tonight or tomorrow. Our Copyright and DMCA policy explains the process for formally reporting copyright infringement, as well as providing instructions on how an affected party can appeal a removal by submitting a compliant counter-notice.

Ken Yeung contributed to this report.