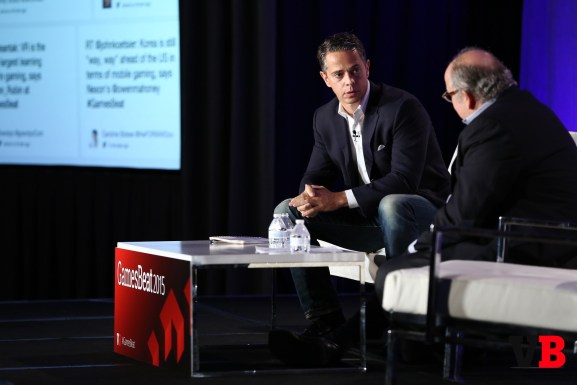 Nexon's Owen Mahoney talks about how his company treats microtransactions at GamesBeat 2015.

SAN FANCISCO –  For two years, Nexon has been looking for game companies that share its free-to-play philosophy. The search ended with new partnerships with Warner Bros. and Lego to create a Lego massively multiplayer online role-playing game as well as with Square Enix to bring Final Fantasy XI to mobile.

But the search for like-minded gaming companies was harder than expected, said CEO Owen Mahoney at GamesBeat 2015 in San Francisco.

Headquartered in Japan, Nexon is a leader in the free-to-play gaming industry, where games are free but developers offer in-app sales on items such as a character’s armor upgrades or special abilities. This was different than the Western approach, sometimes referred to as “pay-to-win,” where developers encourage players to spend money to boost their characters and move on to the next level.

Nexon invented free-to-play games when it was preparing to remove one of its subscription titles because of a lack of players. The team decided to give the game away for free and sell some in-game items as an experiment. Shortly after, subscription membership skyrocketed. In Q2 of 2015, Nexon reported a revenue of 42.66 billion yen, showing an increase of 16 percent over one year. Asia is the leader in the free-to-play market, bringing in $4.2 billion in revenues in 2015. North America and Europe come close behind with $3.1 billion and $2.1 billion in revenues over the same year.

“The point in the story is that it didn’t start out as a monetization strategy or a business strategy,” Mahoney said. “It started out as an idea on how to help your customers, or your gamers, to have more fun in the game.”

The Nexon team quickly realized that 90 percent of players did not buy anything in the game — but they were still able to enjoy it. The last 10 percent, who were paying, did so to have additional experiences within the game.

“That’s a win for the customer and a win for the company,” Mahoney said. Online gaming is only different from other storytelling art because it allows gamers to directly engage in the story.

And Mahoney believes that games are a form of art.

“If you want to build a game company that is sustainable over time and [that] grows over time, you have to build great game art,” Mahoney said.

He said he was surprised at how many companies didn’t think this way when Nexon was out looking for partners.

“We talked to a lot of game companies who were not really focused on the art of games,” Mahoney said. “They were focused on, first and foremost, the business of games.”

Western companies are not only looking at games as a business, but they also have implemented the microtransactions as a great source of revenue.

“They took a very different view point to it, and I think that our industry still probably suffers from that,” Mahoney said.

Mahoney believes that if game developers see free-to-play games as business models to “pull money out of people’s pocket,” consumers will enjoy the game less.

“If you fool people once, they don’t come back, and it’s death to your game,” Mahoney said.

In the last year, Nexon has been focusing on the core idea that free-to-play games should leave the option to purchase in-game content to the players.

“Companies that we respect in the game industry, in Asia and the West, tend to have that same orientation,” Mahoney said. “And they have been able as a result to grow their companies in a very healthy way.”