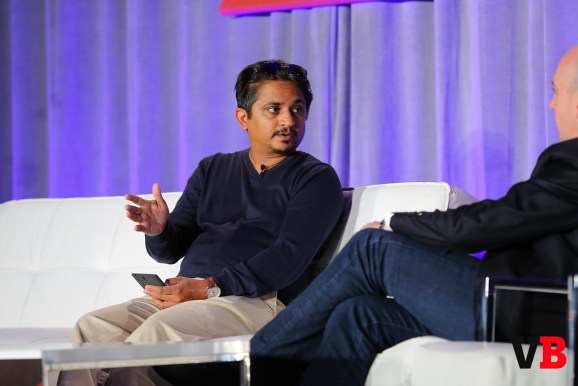 Rajesh Rao discusses the challenges of the Indian mobile gaming market at GamesBeat 2015.

SAN FRANCISCO — India is a huge potential market: With 1.3 billion citizens, it has plenty of consumers eager for great entertainment experiences. And as Dhruva Interactive and GameTantra CEO Rajesh Rao points out, over two-thirds of India’s citizens are under the age of 35 — the youngest population in the world, and one that’s becoming increasingly tech-savvy.

Rao is a true pioneer in the small but growing Indian game industry. He founded Dhruva Interactive, the first Indian game development studio, in 1997. To this day, they remain the largest developer in the nation, employing about 300 people. While the studio was founded with aspirations to serve both the home and Western markets, due to the timing of its founding, Dhruva mainly found itself working with Western publishers on outsourced development. “In the initial years, we had products and services coexisting,” Rao said onstage at GamesBeat 2015 yesterday. “Around 2009, we decided that was not the way to go. We spun out all our products into a separate company [GameTantra].” While GameTantra began with aims of publishing, it eventually morphed into an incubator and investor that helps India-based gaming startups.

While gaming isn’t a new thing in India, Rao believes that it’s never had an opportunity for mass-market success until now. A growing Indian middle class has more disposable income, which has helped fuel the growth of the country’s entertainment industries. They’re investing in technology, too: India has become the fastest-growing smartphone market in the world, with 200 million phones sold so far. Data costs are some of the cheapest on the planet, which lets people use their smartphones more freely.

“These are the building blocks of a market,” says Rao. “The first thing people want to do is try Facebook and WhatsApp … but eventually they want to try out [more] games and apps.” He pointed out predictions that Indians would download nine billion apps this year, and he also mentioned that India would be the second largest mobile ad market.

The increasing reach of smartphones has not only made gaming more accessible, but also more socially acceptable, said Rao. “When we were growing up, there was a perception that games were a waste of time … today, with moms playing Candy Crush and Farmville, they’re realizing that … games are quite alright.”

While downloads are booming, Rao believes that a big push toward monetization has yet to take place. One obstacle is that credit cards are not widely used in the country for small transactions. “There isn’t very much credit card penetration [just 20 million credit cards]. But we have about 400 million debit cards, but the majority are just used to withdraw money from ATMs.” However, habits are beginning to change with a big e-commerce push in India, and Rao thinks mobile monetization methods will ultimately benefit as a result. Another big thing that would help expand mobile monetization, Rao believes, is carrier billing, since 92 percent of mobile phones in India are prepaid with low balances.

“We’re seeing that people are playing. … If the pricing was right, and there was less friction, there would be more conversions,” Rao said. “That’s the thing to crack. If we see that change, I think the market size would improve very dramatically over the next eighteen months or so.” He thinks that if companies like Microsoft and Google wield their influence they can help speed the process along, noting that Android OS commands a dominating market share of smartphones in the Indian market.

“Many of the large companies are looking at India and saying, ‘We are having fantastic numbers from here!’ But they’re not monetizing. We just have monetization challenges right now.”