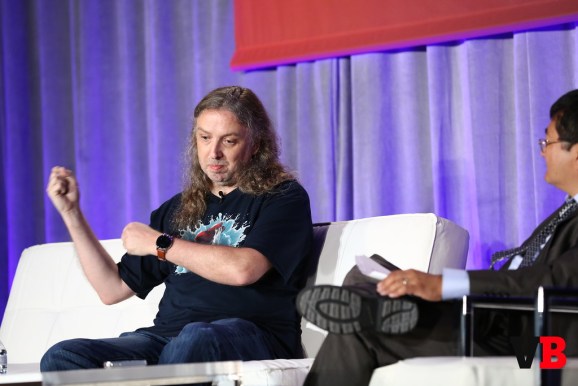 SAN FRANCISCO — Graeme Devine is no stranger to creating revolutionary gaming experiences, having worked on pioneering CD-ROM multimedia games The 7th Guest and The 11th Hour. His current ventures with Florida-based company Magic Leap, however, may prove to be even more important to the gaming medium in the long run: the development of what he terms “mixed reality” technology.

While augmented reality is the more common term, mixed reality is perhaps more apt for what Devine is trying to accomplish: the blurring of the lines between reality and the constructed, electronically-powered fantasy elements. “We think of mixed reality as the placement of [computer-generated] objects in the real world where they interact with objects in the real world,” he said yesterday onstage at GamesBeat 2015.

Devine was convinced to join the company and move to Florida after seeing an impressive tech demo of a monster moving around and interacting with objects on a (real-world) desk. Magic Leap has since raised over half a billion dollars in investment funding from Google and others.

The development of mixed reality applications isn’t easy. “Mixed reality development is really hard … you can’t just be a better console game; you can’t just be a virtual reality game. A true mixed reality game is something that takes the reality in front of me… [and adds content to it] so the two actually interact with each other. Then you have something interesting that can’t exist anywhere else,” he says. “It’s very compelling.”

He then elaborated on the differences between VR technology, augmented reality, and mixed reality tech. “VR takes you to another place … AR presents information on top of the world, while mixed reality adds to the world.” The technology has numerous applications, stretching far beyond the world of games.

Devine also went into his litmus test for whether or not a mixed reality experience would work. “I think a lot about what the applications are that I’d want to add on to the world, something I call the five-mile application,” he explained. “I’m five miles away from my house, and I forgot my smartphone: Do I go back to my house and get my smartphone?” If the applications on the device are sufficiently compelling, he would go back to get it. “What is our [mixed-reality] application that makes you turn around at five miles?”

He then described a game project he was working on. “You start to hear lights and sounds going off [in your house] … eventually you’ll go to that room to see what’s there, and standing in front of you is a ghost. … That ghost points directly at you, and then directly behind you, and [behind you] is the outline of a body on the floor … and the ghost is gone. In your ear, you hear, ‘Please help me.’ And then you realize [this is happening] in my house. …

“That kind of experience, you can’t have with VR.”

Devine summarized his company’s technology succinctly: “We’re the world without atoms. Unless you actually need those atoms, we can make the photons for it.