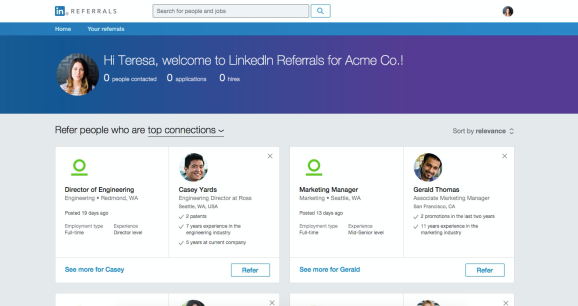 In 2013, I wrote about a division of LinkedIn that was at the time, the company’s best kept secret: Talent Solutions. Back then it accounted for 57 percent of LinkedIn’s total revenue. Today, according to its Q2 2015 earnings, Talent Solutions accounts for 62 percent. This is an important sign that this service, which centers on helping recruiters and corporations connect with potential candidates, is working.

LinkedIn has reimagined how it can facilitate more relevant connections for recruiters, and the results are two new features that are being introduced today at the company’s Talent Connect conference, in addition to the debut of its redesigned core app, codenamed Project Voyager. The first is a new search engine that takes the guesswork off of recruiters and leaves it to LinkedIn’s algorithm, while the second involves an application aimed at boosting employee referrals for available jobs within your company.

Recruiting without the guesswork

There are over 38,000 companies using LinkedIn to recruit today, making it one of the top platforms in the marketplace. However, in the case of finding the right talent, oftentimes hiring managers don’t know how to put together a job description — they might just say, “Hire someone like [enter employee name here].” This doesn’t really give recruiters much to go on because (1) they may not know what specific quality of said employee is required or (2) they don’t really understand what that particular role is about. 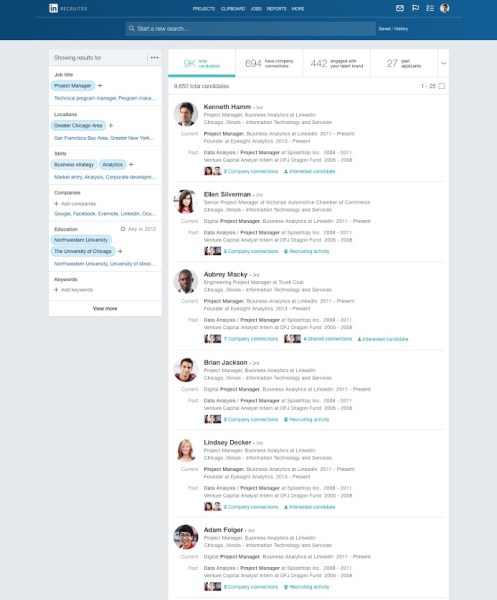 Within LinkedIn Recruiter, finding the right candidates becomes more intuitive and efficient. Queries can be run based on specific traits, job titles, or simply by putting in a target person’s LinkedIn profile. For example, if you want someone like me, you can enter Ken Yeung into Recruiter; the system will analyze my profile and select candidates from among its 380 million users to find ones that best match up. No longer will recruiters need to write Boolean search strings (although they still can if they want).

There are multiple ways for a recruiter to filter their search results further. The primary way is by adjusting job title, locations, skills, companies that a person has worked for, schools they’ve attended, and other pertinent keywords. After this, you can adjust what LinkedIn calls Spotlights. These are specific subsets that further filter your search results based on the number of total connections, the number of direct connections with your company, whether they have engaged with your brand, and whether they have previously applied for a job with your company.

Spotlights are not fixed, meaning that these signals are adjustable based on what companies are looking for. However, the only way to tweak them is by contacting LinkedIn directly and making a request.

The belief is that by going through this exercise, LinkedIn Recruiter will now be smart enough to help you find a candidate likely to accept your job offer.

It’s important to note that although no private information will be displayed in Recruiter, recruiters will be able to see all public information on user profiles regardless of the degree of connection.

While LinkedIn Recruiter does make it easier for recruiters to find talent, improving the team takes a village. In a 2013 report by Deloitte, employee referrals have been highly touted for their success. It’s believed that referrals generate high returns because current employees are referring people “who are similar to themselves in terms of skills and cultural fit.”

The report goes on to state:

To press this advantage, LinkedIn has debuted a new site called LinkedIn Referrals, which seeks to help increase the number of leads at scale. This is made possible by the integration of the recently acquired Careerify. 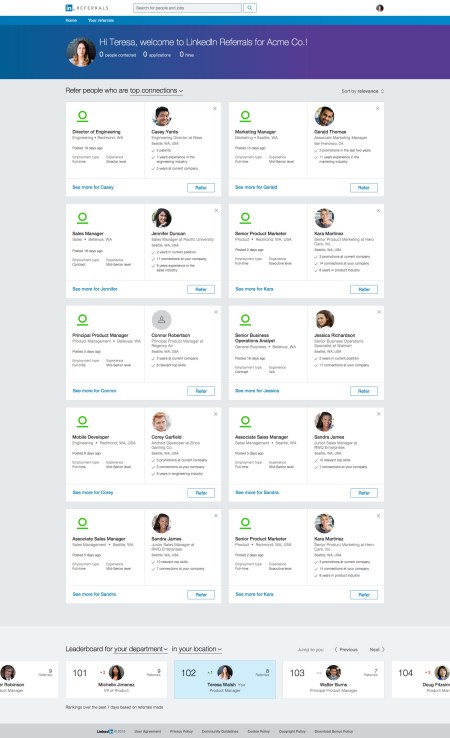 LinkedIn Referrals is integrated with your company’s applicant tracking system (ATS) to import all current job openings — not just the ones that are shared on LinkedIn. Employees can either log in daily or receive an email notification (don’t worry, it probably won’t be too many emails) that will inform them of the latest jobs.

The idea behind Referrals is not only to improve recruiting efforts, but to also keep employees up to date about what jobs are currently open. When employees log into the site, they’ll need to authenticate with their LinkedIn account. Then they’ll see open positions within the company, along with suggestions for which of their first-degree connections possibly match up to it. LinkedIn Referrals has a learning algorithm so that when you let it know that someone isn’t a fit for a specific position, it’ll adapt and improve its recommendations for the future.

If there is a fit, employees can notify their connection in one of three ways: send an InMail invite, copy the job description link and send it to them via email, or just send an email right from within the LinkedIn Referrals service. Each option will feature an “apply now” link that, when clicked, will deliver the candidate directly to the company’s own careers page, not the LinkedIn/Craigslist/Monster.com page. 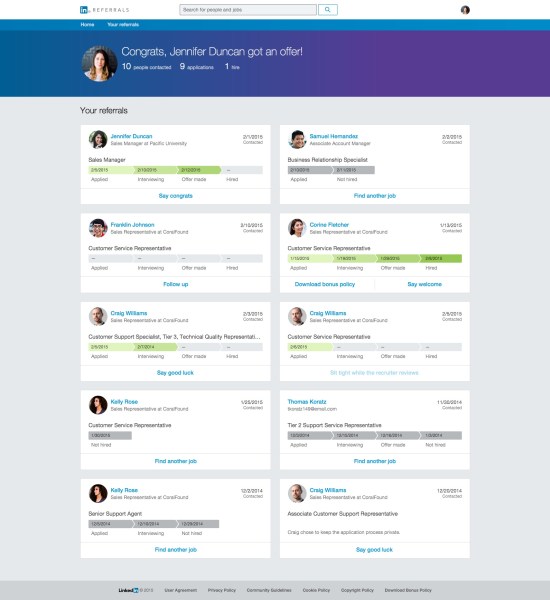 To help keep employees engaged, they can track the status of their referrals. There’s a dashboard that lets them know if someone has applied, is interviewing, has received an offer, or has been hired. LinkedIn said that a lot of employees it has spoken to often wonder about the status of their referrals. “It gets employees to be part of the process,” a company spokesperson told us. To help motivate the team, LinkedIn Referrals also utilizes a leaderboard that ranks the employees based on how many referrals they make.

Recruiters also can use this service to gather insights into how the company’s referral program is really performing. Metrics displayed include the total number of referrals, applications, interviews, hires, and more. It will also show who has signed up for referrals and where they’re coming from, while also showing which employee has been the most active.

Here’s the catch for LinkedIn Referrals: It’s not integrated with Recruiter yet; the company said it’ll happen eventually, though. In addition, Referrals isn’t a standalone application but a mobile-friendly microsite. Finally, LinkedIn charges between $10 to $12 per employee, so people who are registered but don’t contribute are essentially wasting the company’s money.

When will this be available?

The current plan is for LinkedIn Referrals to roll out starting November 1, while the updated LinkedIn Recruiter is scheduled for sometime in the first quarter of 2016.