If you care about your productivity, you might not want to play Hex FRVR. Players have already collectively spent over 106 years in the insanely addictive new puzzle game, mainly over the past few days.

Hex FRVR — playable in browsers, on Facebook, and on iOS and Android devices — blew up on Reddit’s gaming forum over the weekend, and people just can’t put it down.

It plays like a slow-paced Tetris set on a hexagonal grid. You place one shape at a time (from a choice of three) onto the grid, trying to complete lines in order to wipe them away and score points, getting better scores for combos. If it sounds simple, it is. But then, so are some of the most timeless game ideas.

Benjaminsen knew he’d created something addictive when he started testing Hex FRVR, which was originally inspired by a game he played within the virtual world Second Life. “Quite a lot of my friends started losing sleep to the game, which is a pretty good indicator that you have a success on your hands,” he said. “Interestingly enough, the game got even more addictive when sounds and music were added to the game.”

Hex FRVR actually released on Facebook and browsers back in August, with mobile versions following on October 4, but its popularity on Reddit — where a thread on the game has racked up nearly 1,600 comments — was what really caused an explosion of interest just a few days back. “The Reddit post was definitely what made the game explode” said Benjaminsen. “While I have been successful with distribution before, I have never done anything like this.”

Benjaminsen realizes the value of analytics, and he’s tracking stats across all of Hex FRVR’s distribution platforms. He shared a snapshot of the figures from Monday, which showed over 1.2 million sessions played with an average duration of just over 46 minutes (and 1 hour, 21 minutes for returning players).

That means people have already played over 935,574 hours, or 38,982 days, of Hex FRVR, which works out at over 106 years worth of gameplay. These are pretty impressive numbers for a game that started out as a HTML5 test. 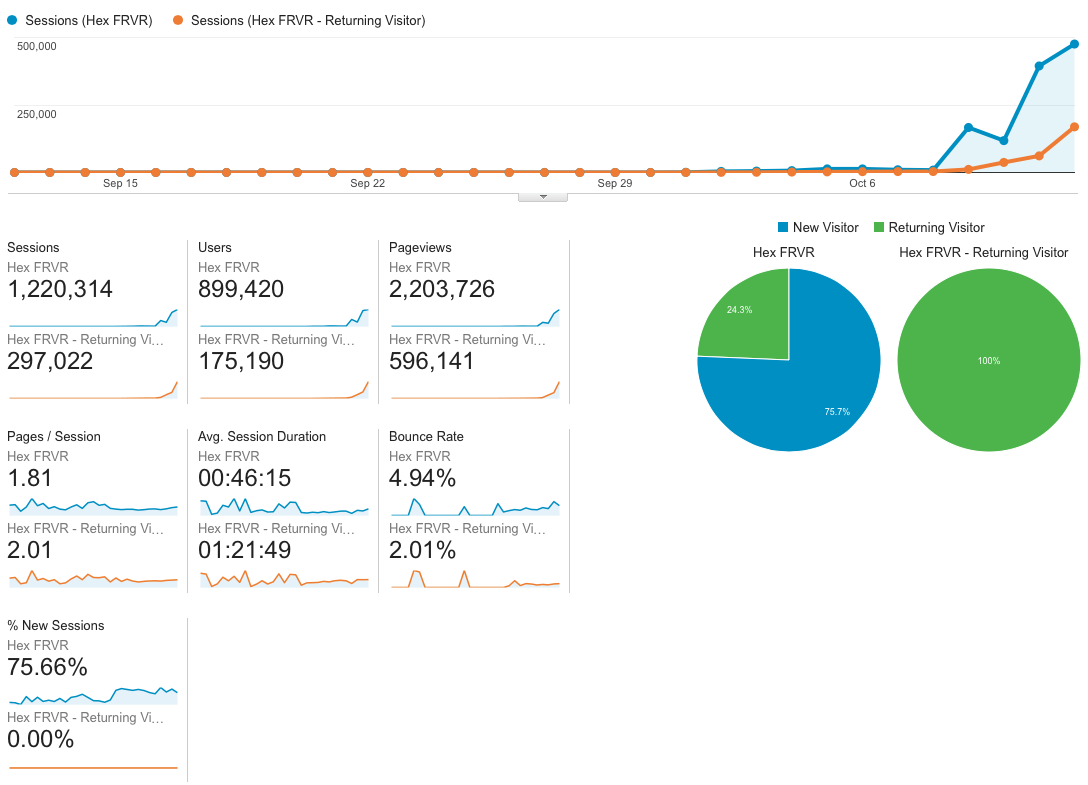 Above: Analytics for Hex FRVR.

Hex FRVR is getting a peak of around 15,000 concurrent users, with an interesting trend toward players in China, who account for 46 percent of all users (with the U.S. representing 19 percent).

Beyond the data, Benjaminsen’s also getting plenty of anecdotal reports of Hex FRVR’s addicting nature. Reddit user Gaaraisgod said, “Spent my Saturday on this and the first thing I did today (Sunday) is start playing.” And Benjaminsen shared a neat anonymous story on his own blog: “Today at the dinner table my dad actually showed me Hex FRVR, not knowing I already knew about it and was in fact playing it at that moment. Just thought you’d like to know that little anecdote.”

Above: This Reddit thread caused interest in Hex FRVR to explode.

Successful, quirky, mobile games have an unfortunate history of being cloned. Take Threes, the indie game that came before 1024! and the hugely popular 2048. Now, it’s impossible to browse the Google Play store without finding a host of similar titles.

Benjaminsen said he’s not really concerned about people copying Hex FRVR, which some Reddit users have already compared to the mobile game 1010! — although Benjaminsen says he only saw 1010! after creating a prototype of Hex FRVR.

“I would not say I worry; copying of basic game concepts is part of the industry and something you get to live with,” he said. “To some extend I find it the highest kind of flattery. Likewise, I have about 15 games already on my to do [list], some more unique than others, and nobody can clone what I have not released yet.”

Benjaminsen’s quite open about his plan to earn $250,000 a year as a game developer while working a maximum of three days a week.

To that end, he is monetizing Hex FRVR on mobile with advertising, but he’s trying to keep it low-key.

“I do believe strongly in good user experience above monetization,” he said, “so I keep the ad pressure very low. I would much rather have users enjoy the game for months than try to make as much money as possible in the short term. Hex is just the second game in my new one-man games company FRVR and I really want to build a brand loved by users.” 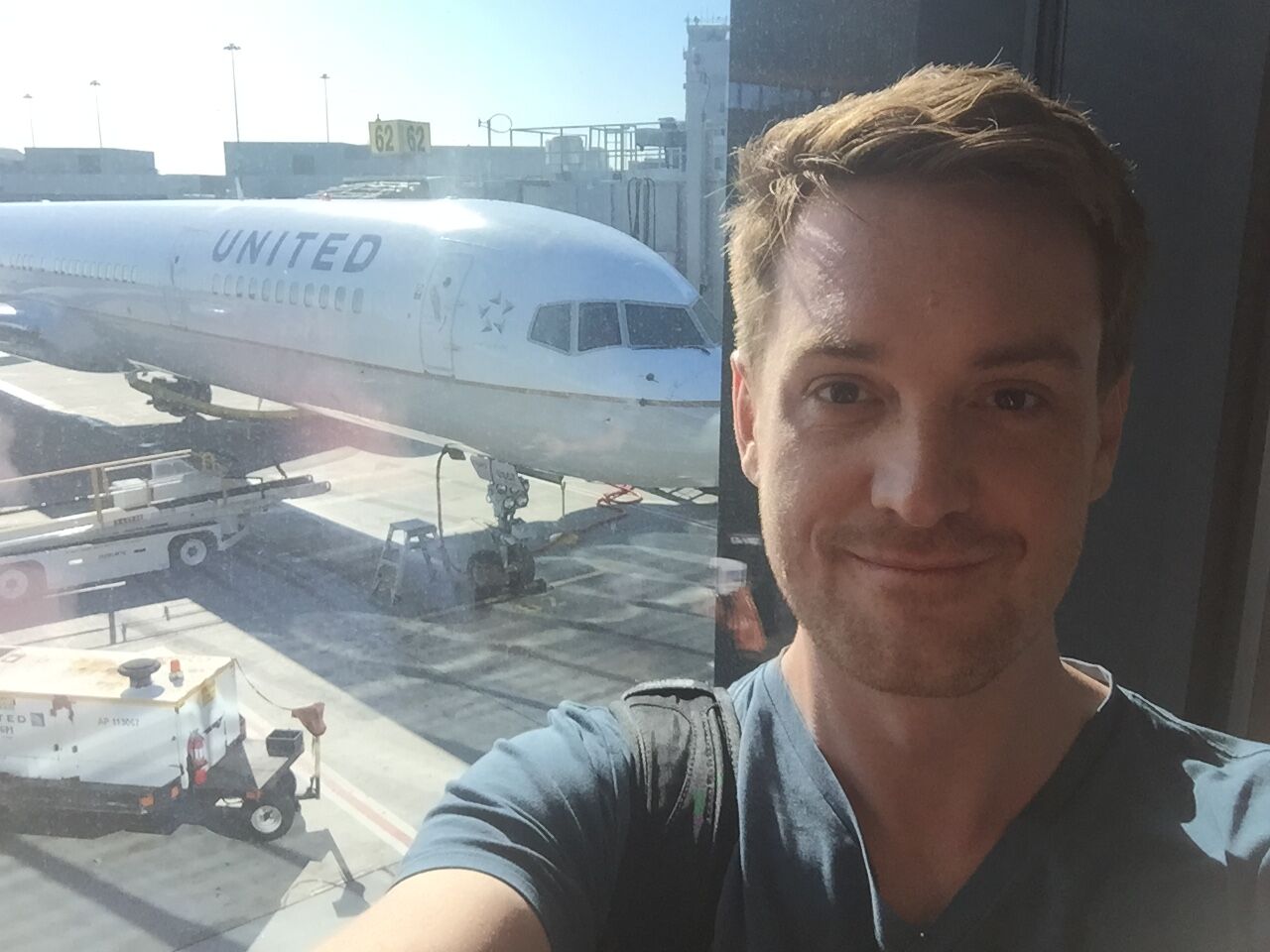 Above: Chris Benjaminsen, the globe-trotting indie developer, on his way to Toronto.

I spoke to Benjaminsen via email as he was waiting for his United Airlines plane to take off for Toronto. He’s heading there for three weeks before moving on to Vancouver. His development and traveling arrangement is most unusual, and it means he’s often working out of hotel rooms, but it sounds like a great way to live, at least for a short time.

To indie developers beavering away in their bedrooms or sat at the local coffee shop, Benjaminsen’s plans for Christmas in the French Alps, before heading on to Asia in the spring, likely sound idyllic. And if he can combine his travels with a big mobile hit in Hex FRVR, he’ll have truly mastered that elusive work-life balance.