In the first half of 2015, Square took losses of $77.5 million on revenue of $560.5 million. In 2014, the company reported gross payment volume of $23.78 billion. The filing reveals that retail is, unsurprisingly, the biggest source of transactions for the company, constituting 21 percent of its gross payments volume. Retail transactions eclipse those from services, food, beauty, contractor, and transit. 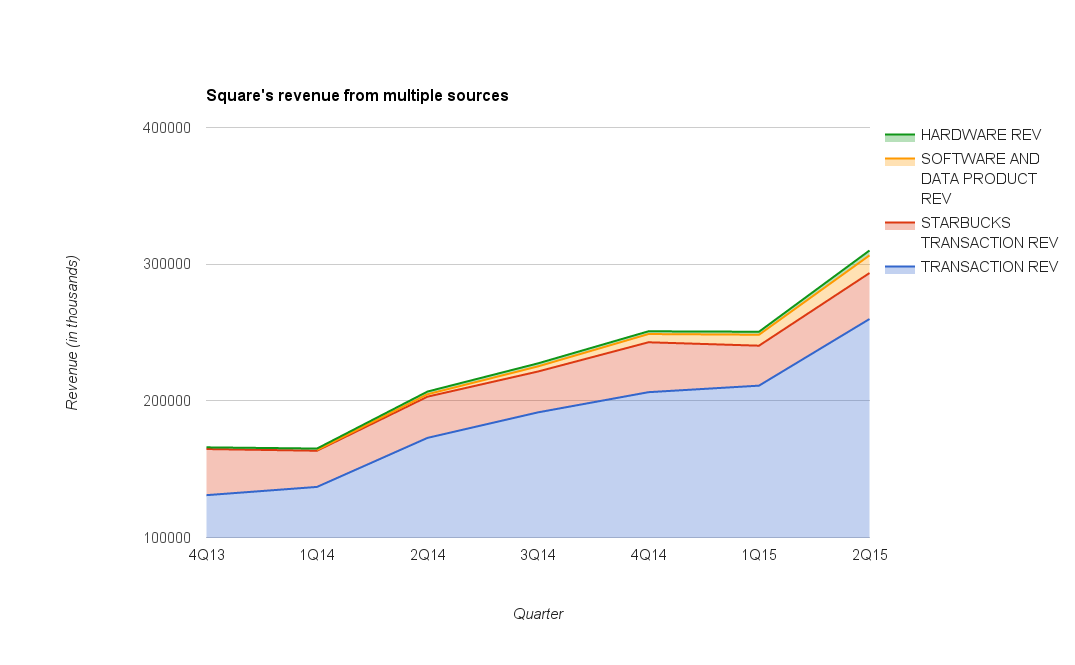 Above: Revenue sources for Square.

Rumors of Square’s bid to go public have been circulating for months. The announcement comes as CEO Jack Dorsey has recently taken on additional duties as permanent CEO of Twitter, after serving as interim chief since Dick Costolo stepped down from the role over the summer.

With Square’s public offering now in the mix, Dorsey’s plate is quite full. He’s had difficulty in the past juggling two companies at once, though he certainly seems committed to Square’s success. Dorsey says he has given 20 percent of his equity to the company and to the Start Small Foundation, and plans to invest another 10 percent of that equity into Square. Still, Square’s executives made a point of mentioning Dorsey’s split attention in the filing:

Our future success is significantly dependent upon the continued service of our executives and other key employees. If we lose the services of any member of management or any key personnel, we may not be able to locate a suitable or qualified replacement, and we may incur additional expenses to recruit and train a replacement, which could severely disrupt our business and growth. Jack Dorsey, our co-founder, President, and Chief Executive Officer, also serves as Chief Executive Officer of Twitter. This may at times adversely affect his ability to devote time, attention, and effort to Square.

Square has experienced lots of highs and lows since its founding in 2009. The company enjoyed a propitious debut with the launch of its first product: a square credit card reader that connects to a smartphone through its headphone jack. This initial product floored prominent payments innovators like PayPal and Google, both of whom were working on digital payment technologies at the time.

Since that initial product debut, the company has rolled out point-of-sale software for iPads (spurring a slew of tablet-based competitors) and created a host of back-office tools for inventory management, invoicing, analytics, appointments, payroll, staff management, and cash advances. It also created Square Cash, a peer-to-peer payment app, and bought up two restaurant delivery apps: Caviar and Fastbite.

While Square has enjoyed some success, it’s also made mistakes along the way. For instance, two attempts at consumer-based wallet apps both ended in failure. Square Wallet was an attempt to use mobile payments in stores by letting consumers check into an app and then give their name to the cashier. The app didn’t catch on as hoped, and three years after its launch, the company swapped it out for a similar app called Square Order. The latter allowed customers to pre-order food and drinks at cafes and pay in advance through the app. A year later, Square Order, too, shut down.

In addition to these missteps, negative press has been haunting Square for over a year. Right before the company transitioned from Square Wallet to Square Order, the Wall Street Journal released a report positing that Square had lost $100 million in 2013, after burning through a significant portion of its investor funding.

Though the report no doubt damaged Square’s credibility, the company has continued to press ahead with product launches and acquisitions. It’s also taken funding, including a $150 million round that brought the company’s valuation to a gargantuan $6 billion. In addition to funding, Square has gotten support from heavyweight investors like Khosla Ventures, Sequoia Capital, Rizvi Traverse, Lawrence Summers, Rizvi Traverse, Mary Meeker, and Ruth Simmons.

But Square still has a lot of competition to contend with, and the filing acknowledges a plan for staying relevant. “We seek to differentiate ourselves from competitors primarily on the basis of our cohesive commerce ecosystem and focus on accessibility, speed, transparency, and trust,” the company says. “Our ability to innovate quickly to accept new payment technologies such as NFC through Apple Pay, Android Pay, and other new currencies further differentiates our payments platform from our competition.”

Though Square has developed a name for itself as a disruptor of payment technology, many of its early competitors have caught up to its innovation with their own solutions. With the likes of Apple Pay, Android Pay, Samsung, Pay, chip and pin cards, and other new payment methods, it will not be easy for Square to stay ahead of the pack.

Still, Square is showing signs of growth. From 2013 to 2014 the company grew annual net revenues from $552 million to $850 million. The filing also indicates that though the company isn’t profitable yet, its losses are slimming.

Square is slated to start trading on the New York Stock Exchange under the symbol SQ.