Sometimes, a game is so good that it can actually become a problem.

I think that’s how Nintendo feels about Yoshi’s Island, the classic Super Nintendo platformer that many consider one of the greatest 2D side-scrollers ever made. Unfortunately, despite many attempts, sequels never matched the original’s brilliance. Yoshi’s Story, Yoshi’s Island DS, and Yoshi’s New Island have become afterthoughts.

Well, Nintendo’s trying again, this time with Yoshi’s Wooly World, which comes out on October 16 for the Wii U. This time, it’s hoping that some clever visuals can help this game flutter-jump over Yoshi’s Island imposing legacy. 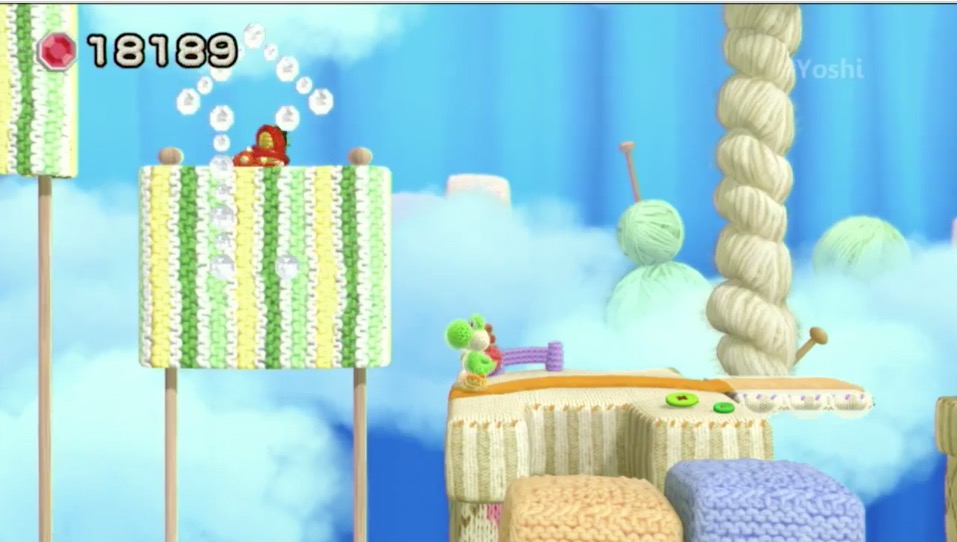 Yoshi’s Wooly World is gorgeous. It has an arts and crafts-style, with most of the levels and characters created entirely out of yarn. And I really mean everything, including effects like water and lava. It’s not only visually impressive, but it’s also fun to see how creative the designers get as they try to make something like a waterfall look realistic with wool and lace.

Yoshi also looks great, and I love the way he transforms his body as he moves around. His feet turn into wheels when he starts running.

The music also stands out. It’s light and breezy, which fits the fanciful, light-hearted style of this Yoshi outing. 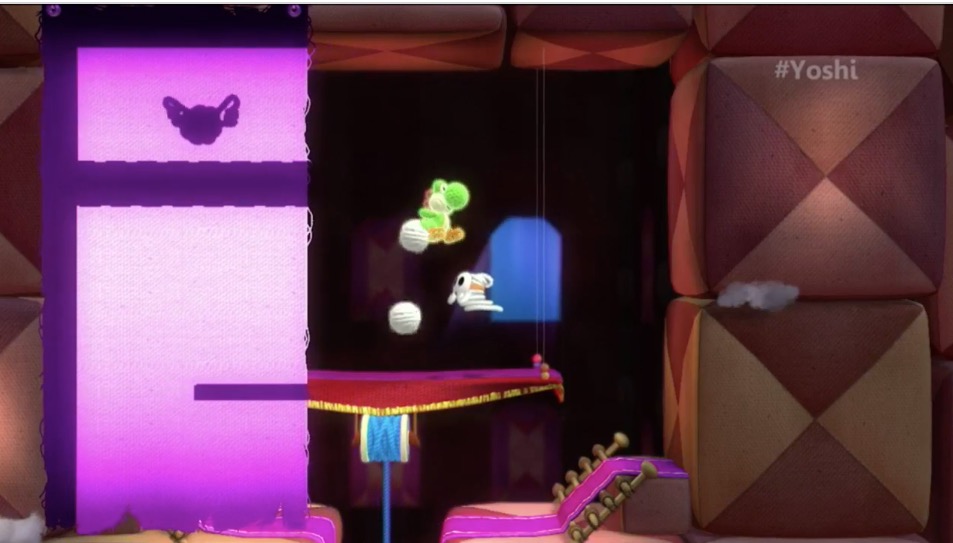 Above: Levels have lots of secrets.

Gameplay-wise, Wooly World plays a lot like Yoshi’s Island. You can eat enemies and turn them into eggs, which you can then throw. You also have a flutter jump, which lets you hover across longer distance, and a butt stomp, which hurts tougher enemies and breaks certain obstacles. All of these elements work as well as they do in Yoshi’s Island, and any one who played that classic will definitely feel some good, nostalgic vibes when navigating Wooly World’s levels.

Wooly World has simple Amiibo support, but it’s just as charming and cute as the rest of the experience. Connecting an Amiibo to the game unlocks a new color scheme for Yoshi. So, using a Mario Amiibo unlocks a Mario Yoshi. These designs are all delightful, and I loved playing levels as Yoshis dressed like Sonic, Mega Man, and Link. 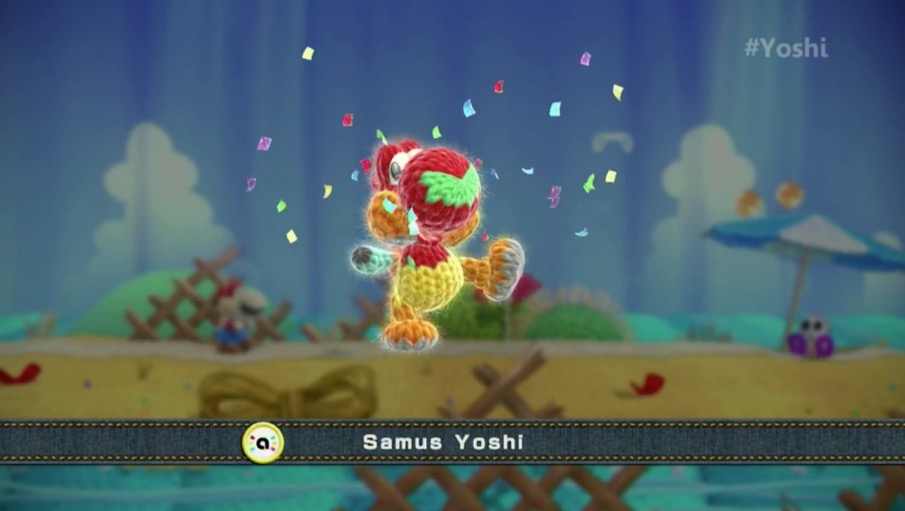 Yoshi’s Island is a challenge. It’s sequels have had a hard time matching that difficulty, often feeling like games designed only for children and not platforming fans. Wooly World is certainly harder than Yoshi’s Story, but it still often feels too easy. It just doesn’t depend on the same quick-thinking jumping and egg-shooting/ricocheting that make Yoshi’s Island great.

If you don’t care about searching for collectibles, you could easily breeze through most of the levels. Honestly, especially in the first half, looking for those hidden items is really the challenge. At least finding them unlocks extra levels and Yoshi costumes, so the incentive is decent.

The flutter jump feels too forgiving. You can do it over and over, and you don’t lose any height (or barely any) if you time it right. This means that you can essentially fly over many of the extended platforming sections, floating over intended platforms and challenges. Bosses also feel too easy, with predictable patterns and easily avoidable attacks.

The last half does feel closer to an acceptable difficulty, and the last world of levels actually offer a decent challenge. Even the bosses begin to feel a little tougher. I just wish that the difficulty curve felt more balanced. I understand that you need to ease players into things, but Wooly World holds back for too long. 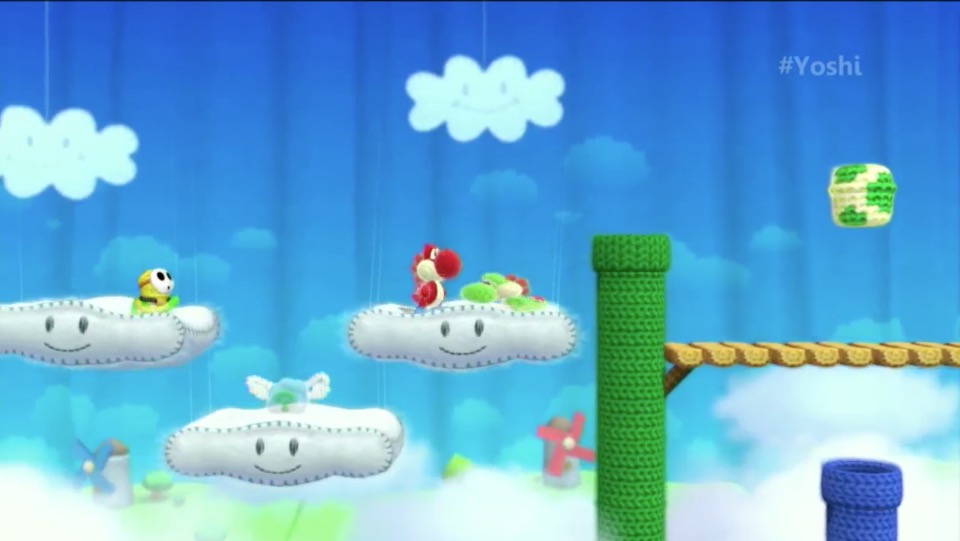 Above: The difficulty is sometimes a yarn full of yawn.

Wooly World offers two-player co-op, but it’s not worth it. Two players quickly crowd the screen and get in each other’s way. You can eat the other player and turn them into an egg, which is useful if you’re otherwise out of ammo, but you’ll often accidentally swallow the other player when you’re aiming for something else. Also, Wooly World’s level design focuses a lot on finding hidden items, which becomes difficult when two players are trying to move the screen in different directions.

Yoshi’s Wooly World is an adorable game, and it’s often a fun one. However, the light difficulty prevents it from reaching the excellence of Yoshi’s Island. It’s still the best Yoshi adventure since that classic, but no one is going to bring up Wooly World in future “best platformer ever” discussions.

Yoshi’s Wooly World is out on October 16 for Wii U. Nintendo provided GamesBeat with a copy of the game for the purposes of this review.