Earlier this week, Americans celebrated National Coming Out Day, a time to raise awareness of gay, lesbian, bisexual, transgender, and queer identities and to fight homophobia. It was started in 1988, centered on the anniversary of the 1987 National March on Washington for Lesbian and Gay Rights.

In honor of this year’s celebration, Facebook has published a report looking at trends of people who have “come out” over the past year. It shows that on the social network, more people are coming out and that support for LGBT groups is increasing. What’s more, it seems the June 26 Supreme Court Obergefell ruling had a big impact on people coming out.

While the traditional definition of “coming out” is the voluntary self-disclosure of one’s sexual orientation and/or gender identity, Facebook has a slight tweak to it which helped in its research: updating your profile to express a same-gender attraction or using the social network’s custom gender tool to better express your identity. 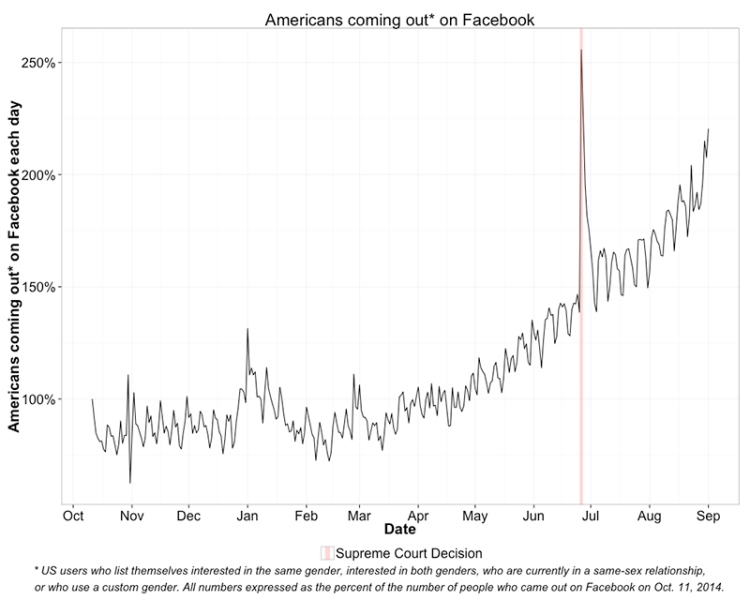 Facebook looked at its American user base based on the above definition and graphed the trend. As you can see, as the Supreme Court ruling neared, more people came out. But it seems to be the Obergefell ruling that really kicked it into overdrive, as the number of people in total who came out on the social network was “roughly 2.5x higher than it was on October 11th (National Coming Out Day) of the previous year.”

Facebook estimated that in the past year, approximately 800,000 Americans updated their profile to express a same-gender attraction or a custom gender. Overall there are more than 6 million Americans that have come out on the social network — of which 78 percent made this change over the past three years. 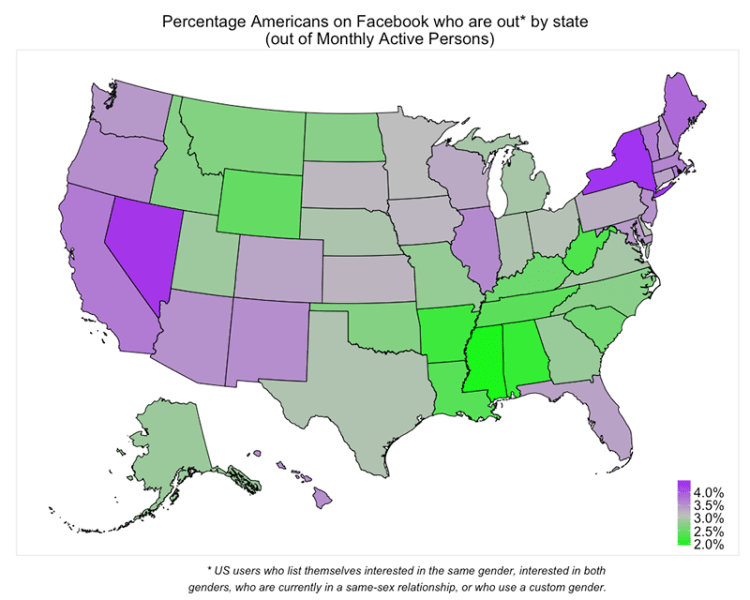 And there’s perhaps no stronger place for support than on Facebook: During the time surrounding the Supreme Court’s decision, more than 26 million people opted to mark their profile pictures with a rainbow filter. What’s more, 5.7 million Americans have joined at least one of the 300 most popular LGBT pages, a jump of close to 25 percent over the past year.

Jay Brown, the director of research and public education at the Human Rights Campaign Foundation, applauded Facebook’s research, saying in a statement:

Facebook’s research is proving just what a difference visibility makes to LGBT people. In a year that’s seen unprecedented coverage of LGBT people — from major coming out moments to Supreme Court victories to tragedies shaking the community — we see people becoming visible in their own lives.

And it’s these small coming out moments — the 21-year-old college student who tells his Facebook friends from high school that he’s transitioning; the retired teacher who changes her status and posts about her marriage to her longtime partner; and the gay dad in a small town who comes out to his co-workers and then his family online — that make bigger coming out moments possible.

When people know us, they support us. And clearly social media is an incredible tool in making that possible.

Like many technology companies, Facebook presents as an ally of LGBT rights, whether it’s celebrating Pride or joining others like Apple in support of gay marriage, although its real name policy has continued to cause controversy.

While the research is limited to just the United States, what’s interesting is how this continues to apparently further Facebook’s mission of connecting the world. People are actively sharing their stories with their friends, and the respect and admiration seems to be spreading to more people. Certainly over the past year, there have been many occasions that have captivated this community, including World AIDS Day and Diane Sawyer’s interview with Caitlyn Jenner.