Planet Earth spends a ton of money on video games, but it turns out that only a fraction of the countries make up the bulk of that spending.

The top 20 nations alone will spend $83 billion on video games by the end of 2015, according to intelligence firm Newzoo. That represents nearly 91 percent of the worldwide market. And, as predicted, China is on top of the United States in terms of total revenue with $22.23 billion in spending. The U.S. came in at second with $21.97 billion. And together, China and the U.S. made about as much from games as the rest of the top 20 combined. This data is important as developers look to emerging and established markets to help them make a living, and it shows that a global strategy is necessary to maximize revenues.

Here’s the top 20 countries by gaming revenue via Newzoo: 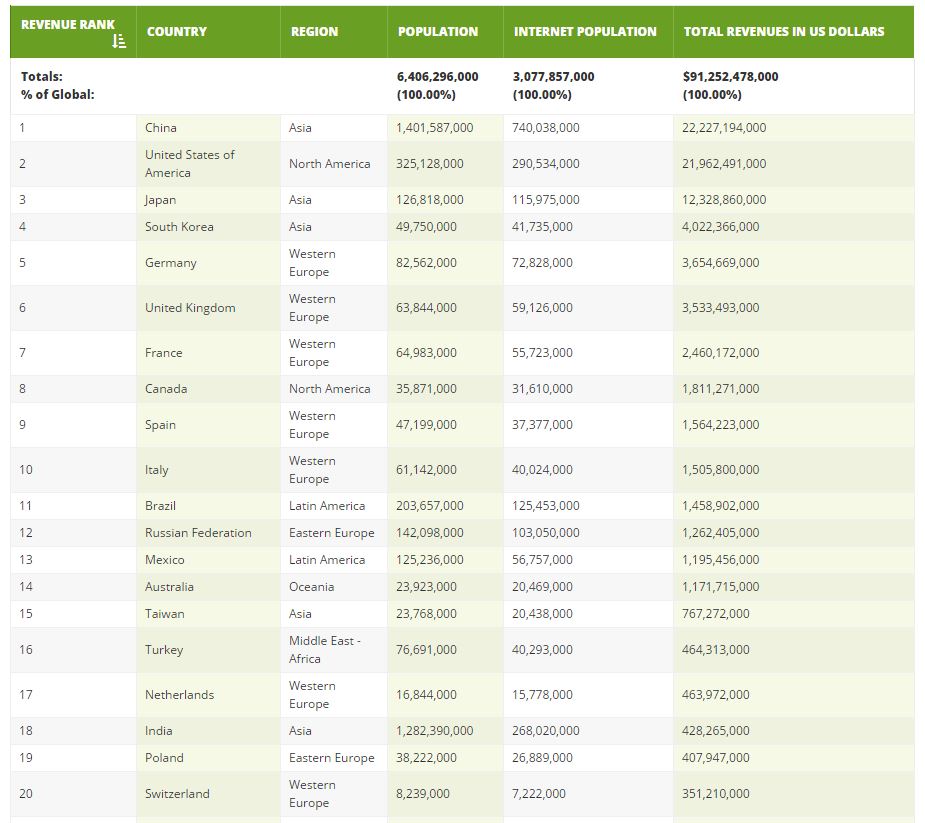 While China and the U.S. dominate the chart thanks to their diverse audiences (mobile and PC are popular in both and console gaming is also huge in the U.S.), other established markets are still generating huge amounts of cash. Japan is the world’s most lucrative mobile gaming market, and that translated into $12.33 billion in revenue. What’s incredible is that two games, Puzzle & Dragons and Monster Strike, are responsible for a large slice of that.

Of course, the rest of the top 10 has all the other established markets that you would expect like South Korea, Germany, and the United Kingdom.

But it’s in the top 20 where we see China’s BRIC (Brazil, Russia, India, and China) brethren surging.

Brazil comes in at No. 11 with $1.46 billion in spending, which isn’t surprising as a number of metrics show that country’s interest in games exploding. It is actually one of the fastest-growing regions in the world for esports, and free-to-play PC games have fully caught on with that audience.

Russia has a similar story to Brazil. Neither of those two countries are huge on consoles, but they both have started opening their wallets for online PC shooters like World of Tanks. That customer segment is pushing Russia to No. 12 and $1.26 billion.

Finally, we have India. That country is flying into the top 20 with $428 million in spending, and analysts and industry experts are already expecting the country to grow into the “next China.” As 3G and LTE speeds improve and gain penetration, and as Google Play and Apple begin offering carrier billing, India’s 1.2 billion people could easily have it competing with the U.S. and China as the next gaming powerhouse over the next decade.