Gabe Leydon, the chief executive of Machine Zone, is the man on the Iron Throne of mobile gaming.

His company’s Game of War: Fire Age has been in the top-grossing charts ever since its release in the summer of 2013. And this summer, more than two years after its release, it became No. 1, eclipsing King’s Candy Crush Saga match-3 puzzler and Supercell’s Clash of Clans strategy game.

Leydon bet everything on Game of War, putting a team of 80 people on it for 18 months. They created a messaging infrastructure, built a translation layer so people around the globe could join each other in alliances, designed a complex strategy game that players would come back to over and over, and even raised a round of venture funding to underwrite it all. He even took out a Super Bowl ad with supermodel Kate Upton, in commercials that have gained a life of their own on YouTube.

Machine Zone also launched a new series of commercials starring singer Mariah Carey in a new campaign for Game of War. And now the company has more than 550 employees, compared to just 95 before the launch, and it is adding 200 people in Las Vegas to deal with customer service.

Leydon hasn’t spoken much about this success, but he has a lot to say. He predicted the coming age of mobile game dominance in 2012, and that came to pass. He was our surprise “mystery speaker” at GamesBeat 2015, where he talked about the challenge of creating a global franchise and why it makes sense to put everything behind one game. His comments are a stark contrast to those from Niccolo De Masi, the CEO of Glu Mobile, who advocates operating a portfolio of games.

GamesBeat: I thought you were bringing Mariah Carey with you. I’m trying out for your new commercial.

Your success all comes from one game. Your strategy doesn’t resemble any other company’s. How do you explain this?

Gabe Leydon: The game we wanted to make is incredibly complex. When we started building Game of War, back in 2011, we wanted to build something that the whole mobile ecosystem could play together at the same time.

What we started with was an Android-first game, because it was easier to release than on iOS. But we built it to be a very complex experience. It has immense amounts of concurrency, translation systems we built to embrace this global community coming together inside a single game, distribution technology so it can work on Android.

We wanted to try to get this ultra-hardcore experience that was the exact opposite of what everybody was doing – an Apple-esque UI, simple, easy to understand the experience. Nobody was thinking that people wanted games with thousands of options. If you look at the PC market and console, they’re all about that. We wanted to make a very complex, very large experience.

GamesBeat: It has a gigantic messaging infrastructure under it.

Leydon: The backend is built on something we call multi-messaging, which is a messaging processing technology. It’s a cousin to high-frequency trading. It’s not a typical game server. We’re just able to process all the actions in the game very quickly. It’s very interesting tech. We’ve worked on it for more than four years now. We can handle more than a million players playing together at once in the old version of Game of War. No other game in the world can do that.

Above: Gabe Leydon, CEO of Machine Zone, is focused on just a single mobile game.

GamesBeat: If you’re a player, you don’t even notice this, right?

Leydon: You notice it in some aspects of the game. There are certain events, certain parts of the game where everybody gets together. It’s very hard computationally. There are a lot of challenges for us, because the game keeps getting bigger, and our biggest events have thousands of players fighting over a throne at the same time. You can see it there. You can see it in the fact that you can view any player at any time. There’s no servers in the game. It’s all just one big world. This takes a lot of people to run. It’s closer to a PC MMO in terms of operations than it is a typical mobile game.

GamesBeat: In our prep talk, I asked you, “Why don’t you just do more games?” You replied with something like, “Why doesn’t Blizzard just do four World of Warcrafts?”

Leydon: Yeah. Originally, World of Warcraft was made by 35 people. It grew up to need around 4,000, when you include customer service. These games aren’t easy. They’re very complicated. They’re very hard to run. We’re currently at about 550 people.

GamesBeat: You came up onstage in 2011 and predicted that user acquisition costs would soar out of control. Game of War was what you saw as a solution to that problem. What do you think looking back on that prediction?

Leydon: It’s kind of obvious — $40 billion or so gets spent on brand marketing, digitally, on the desktop. Currently about 15 or 20 percent of that has moved over to mobile. You’re going from very large screens that can show maybe eight to 10 ads at a time down to very small screens that can show maybe two. There’s a ton of congestion when that money moves from a large screen size down to a small screen size. It’s the equivalent of taking three lanes out of the freeway.

All this money comes from brands into the mobile space and it’s going to cause tremendous inflation in CPM costs. It’s been ramping up. We’re seeing more and more, and we’ll see a lot this Christmas. By 2017 the majority of the digital spend will be in mobile. Mobile phones can’t support that many impressions. They support much fewer impressions than desktop. A tremendous amount of money will fight over far fewer impressions.

It’s going to be a bigger issue moving forward. That line is a continuation from 2011 to 2017 and it’ll just keep going. It’s arcing upwards now. 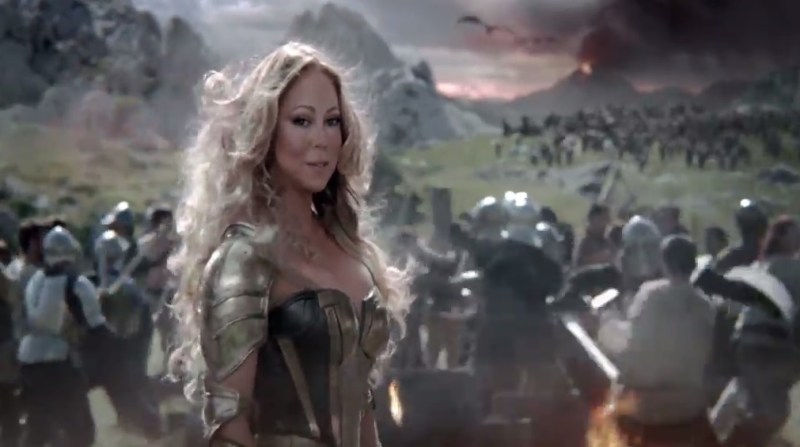 Above: Mariah Carey takes over for Kate Upton in Game of War: Fire Age’s latest ad.

It was a group of people who saw the trends, saw where things were going. Browser-style games were working well on the phone. We all focused on those core browser genres and brought them over to mobile and made them a more mobile experience. That was a really big move. It’s still where it is today. What keeps it there is the rapidly increasing cost of distribution. Those early guys probably aren’t getting as much distribution as they used to be, but they have enough traffic to make a game the size of where they are.