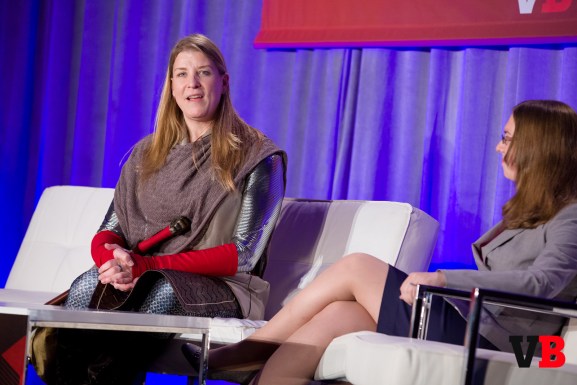 SAN FRANCISCO – For game developers, passion is a problem.

Dressed as a Game of Thrones character to show her willingness to fight for developers, Kate Edwards, executive director of the International Game Developers Association, came to GamesBeat 2015 to talk about game developers’ work conditions — and how their bosses treat them.

According to an annual survey by the industry group, she said game developers are satisfied with their jobs, but their passion for games and their artistic sensibility allows their employers to take advantage of them. Game developers are constantly struggling with deadline pressures. Those who work in big companies, such as Activision or Electronic Arts, also have to focus on games that do not interest them or fit their artistic visions.

“It is something of a disconnect,” Edwards said, adding that developers put up with a lot of pressure as well as demands.

One of the chronic problems is “crunch time,” the tight deadlines that game developers often have to deal with.

According to IGDA’s survey, 17 percent of developers work over 70 hours a week during crunch time. Forty percent of them said they don’t receive any compensation for that overtime.

“That to me is the more serious issue,” Edwards said. “In my view and other industries outside of games, it’s usually called poor project management.”

Edwards believes video game companies should be upfront about their crunch times and unpaid overtime.

“You’ve got people who are incredibly passionate about making games,” Edwards said. “And they will do anything to get a job in the industry, even sacrifice work-life balance.”

If companies don’t change their employment practices, they could lose some of their best development talent. Edwards pointed out that while younger workers are physically and mentally able to pull all-nighters, older developers desire healthier lifestyles. If they can’t have that at a game company, they move to more traditional software companies.

Some developers solve the problem by starting their own companies. According to Edwards, many decide going into indie games to be in control of their work. The IGDA survey found that 48 percent of respondents cited autonomy and creative freedom as priorities when considering a job in the industry.

“They are the ones cracking their own whip,” Edwards said. “They are not having someone else do it for them or at them.”

Edwards believes developer retention is one of the most pressing challenges in the industry.

“There’s a lot of competition, so I think we need to really address some of these issues if we want to keep our talents,” Edwards said.