The original Mirror’s Edge was an unlikely creature.

It was developed by DICE, the team best known for Battlefield, but it asked players to take on the role of a character who usually avoided combat, rarely used guns, and preferred her fists when she had no choice but to resort to physical force. It gained a cult following, both for the unique mechanics and for its story of rebellious “Runners” in an all-too-plausible dystopian society.

Mirror’s Edge: Catalyst is an even more unlikely creature; a project that was oft-rumored to be in production, but not confirmed for five years after the first game was released. Fans watched DICE make a handful of Battlefields before EA finally revealed Catalyst in 2013. I played a few minutes of an early level in the game, and spoke with the its audio director, James Slavin about the long-awaited game.

Catalyst is not quite a prequel or a reboot. Slavin calls it a “rebirth” of the franchise. “Mirror’s Edge is a first-person action adventure game centered around Faith, our main protagonist, who — because of certain events, rises to become the hero of the city that she inhabits.” Slavin said. “She’s not a superhero, she doesn’t use weapons, she uses her body and its effect on the environment to her advantage to take out her foes.”

The original game came out in 2007, and ran on the Unreal 3 engine, which is a far cry from the Frostbyte 3 engine used by DICE on their current-gen titles according to Slavin, “We’ve taken the best bits of the original and enhanced what we can with Frostbyte. Having more memory, better processing to create a more elegant, streamlined, frustration free experience where you can just feel the exhilaration of traveling and running. You can experience the physicality of running, and jumping, and sliding, and everything else you do in our game.” 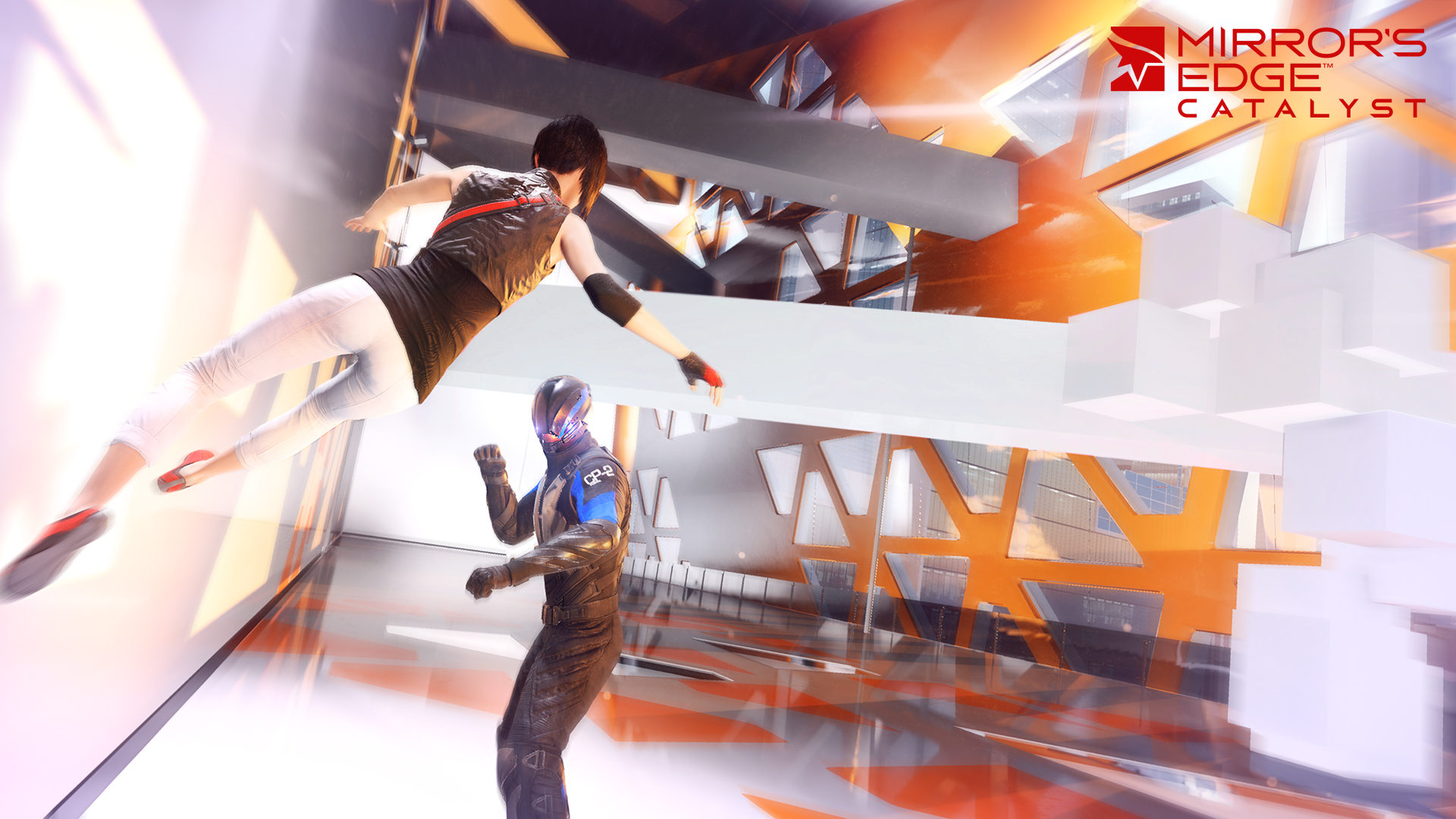 Above: No wallflowers here!

“I think its kinda of cool to take something which is good and try to make it even better. That’s what it is: refining all of those bits and pieces, refining the movement, refining the combat,” Slavin said. “Finding a way to enhance it, refining the way that music works within combat. Putting it in a city which is now bigger than we could make before. More alive, more varied.”

Because the game is seen from the first-person perspective, the sound design is especially important; players can’t see the character that they’re controlling, so the sound of footsteps, and the thumps of Faith’s body landing after a jump are how players determine how well they’re doing. “We had a mantra where we would tell the story of Faith and the city from the feet up,” said Slavin, “So we had all the different kinds of surfaces that you can run on. … You have Faith breathing, her lungs are her engine. So when she’s breathing strong she’s at full speed. When she’s at low health in combat, she’ll start coughing, and that’s telling the player that something’s wrong and they’ve got to get out of danger’s way.” Slavin pointed out that the sound team even recorded the sound of the footfalls with the microphone held at ear level to mimic the differences in the sound quality over the height of a person.

Through the eyes of a Runner

Catalyst uses the color-coded “Runner Vision” that was seen in the previous game. This highlights places and objects around the levels that Faith can use to navigate her way. Players who run fluidly toward things highlighted in red, and time their jumps properly will be able to move quickly and efficiently. This sense of “Fluidity” and “Flow” are key to Catalyst.

We played an early story-based mission where Faith is released from prison, and it’s almost instantaneously sprinting around on rooftops. The familiar Faith from the first game is back, her facial tattoo already present when she appears in the first cutscene. Aside from story-based missions, players can also roam around the city doing activities. In our hands-on demo we played three of these: Dash, Delivery, and Billboard Hack.

Dash is a simple test to see how quickly players can make their way from one point to another. Maintaining momentum and plotting efficient courses are key to this mode. It represents the core mechanics of the Mirror’s Edge franchise in their purest form.

The Billboard Hack activity requires players to find a path up to a rooftop billboard and then hack it to display Faith’s “Runner Tag” a form of digital graffiti to counter the relentless propaganda and advertising. It lacks a hacking minigame, rather this activity focused on verticality, and getting to out-of-the-way places on the map.

The Delivery activity is deceptively titled; it’s not a simple drop off. The plot of Mirror’s Edge is that oppressive surveillance has given rise to an industry of people who can get around the city by using unmonitored paths, and hand-deliver materials that are too sensitive for electronic transmission.

Delivery missions involve taking contraband through secure areas, and fighting off guards at the destination. This mode showed off the combat system in the new game. Catalyst doesn’t let Faith use guns. Instead, players have to either use Faith’s momentum to take down enemies, or engage in difficult hand-to-hand combat against much more dangerous opponents. 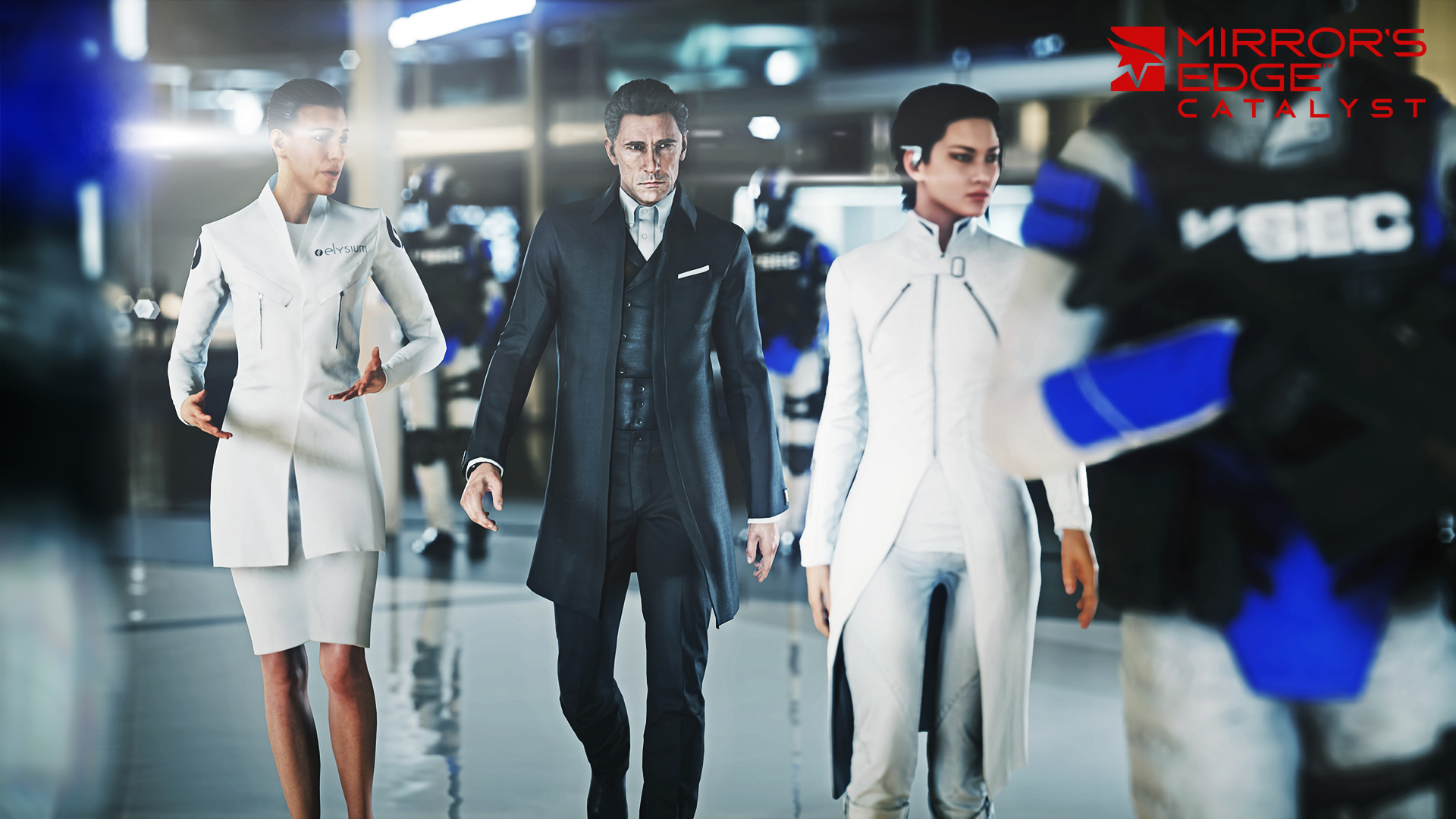 Above: These folks run Glass, the city where Faith battles an oppressive regime.

Dystopian societies are commonplace in video games, but Mirror’s Edge Catalyst has some particularly topical moments. In the hands-on demo that I played, a scene has Faith putting on an augmented reality headpiece. These are worn by almost everyone in her city. Faith and the player are immediately flooded with noisy beeps, propaganda, and advertisements projected all over their AR display.

This plays out a bit like the scene in the film They Live, where Rowdy Roddy Piper’s character discovers that his sunglasses allow him to see through the subliminal propaganda all around him. In Mirror’s Edge Catalyst, Faith gets a brief glimpse at how the average person sees this world, and then she quickly alters the device to turn off the noise and use it for her Runner Vision.

“What we wanted to do was make it clear that Faith doesn’t want to live in the world of the ordinary citizens where they are bombarded by adverts and bombarded by propaganda.” Slavin says, “So instead, she doesn’t have that. [Her associates] hack it to take it all away, and when she does that she feels free again. That’s how we want the player to feel, free when they’re running around. Feeling good and exhilarated.”

Mirror’s Edge: Catalyst comes out February 23 for PlayStation 4, Xbox One, and PC.