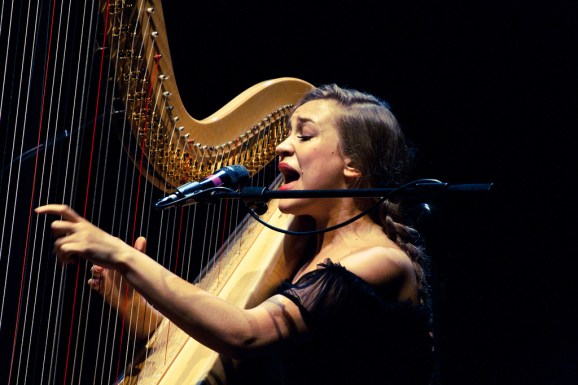 In an interview with the Los Angeles Times on Friday, musician Joanna Newsom had some harsh words for Spotify.

While discussing her new album, the eccentric singer-composer-harpist laid out her complaints with the music streaming service using the quirkiest, most Joanna Newsom-sounding metaphor possible:

“I’ve walked out of grocery stores because I can tell that there’s a banana over-ripening that’s fallen under the produce bins. . .Spotify is the banana of the music industry. It just gives off a fume. You can just smell that something’s wrong with it,” she said.

But she didn’t stop there:

Spotify is like a villainous cabal of major labels. The business is built from the ground up as a way to circumvent the idea of paying their artists. The major labels were not particularly happy with the fact that as the royalty money dwindled more and more, their portion of the percentage split agreed upon in their licensing agreement got smaller and smaller.

So someone came up with a great idea that if they start a streaming company, they can make those percentages even smaller. Infinitesimal, because they can make their money from advertising and subscription, and they don’t have to pay their artists anything for that. So it’s set up in a way that they can just rob their artists, and most of their artists have no way to fight it because they’re contractually obligated to stay with the label for x amount of time and you can’t really opt out. It’s a garbage system.

But besides some strange banana-smell imagery, Newsom isn’t adding much to the ongoing debate of Spotify’s pay structure and the broader nature of streaming music. Spotify was quick to trot out its go-to defenses:

1/3 Happy Saturday. Some old misinformation swirling so some friendly reminders. We pay ~70% of ALL revenue (ads &subscribers) in royalties.

2/3 We pay labels & publishers/collecting societies. They pay artists & songwriters in turn based on their own contracts with each other.

3/3 We've paid well over $3 billion in royalties to date, and it's climbing every day.

Still, there is a loud chorus of performers, songwriters and straight-up superstars in the record biz who take issue with the industry’s incredibly complex and secretive pay structure. It’s not just Spotify either — Apple Music and Tidal have faced similar criticisms. Newsom, whose music is only available on Pandora (and thus not truly streaming on demand), is just the latest to, uh, smell the bananas.