(By Jim Drury, Reuters) – An electric wheelchair that can climb most stairs, including spiral staircases, has been developed by Zurich-based students.

The Scalevo Wheelchair can mount one stair per second and was designed by 10 students at the Swiss Federal Institute of Technology (ETH Zurich) and the Zurich University of the Arts.

When being used on normal flat ground it balances on two wheels like a Segway and allows users to turn on the spot in order to quickly change direction. Two rubber tracks mounted to the bottom of the chair can be summoned at the press of a button to allow the user to climb stairs.

According to Carlos Gomes, of ETH Zurich, “we have two main wheels, two large wheels to drive around on the flat ground in a balancing mode like a Segway. And then we have two rubber tracks which we can extend to the angle of the stairs and let the wheelchair be always upright on every angle on the stairs.”

Colleague Miro Voellmy said the rubber tracks make the system entirely safe, even if stairs are uneven or cracked. “Tracks are excellent for this use case because they have a very large footprint, which makes it near impossible to tilt, and they are also very smooth so it doesn’t feel like you’re driving up stairs, so it just feels like you’re driving up a ramp because they’re so flat and they adapt to the stair profile. So it doesn’t matter if the stair is wooden or metal or glass, the tracks they grip and there’s no danger of slipping,” said Voellmy.

Scalevo ascends the stairs backwards. When it reaches a set of stairs, the user presses a button to lower the tracks to the ground and its rubber grips hook onto the steps above to propel the chair and its occupant upwards. As it reaches the top a smaller pair of support wheels descend to prevent the wheelchair from toppling over. 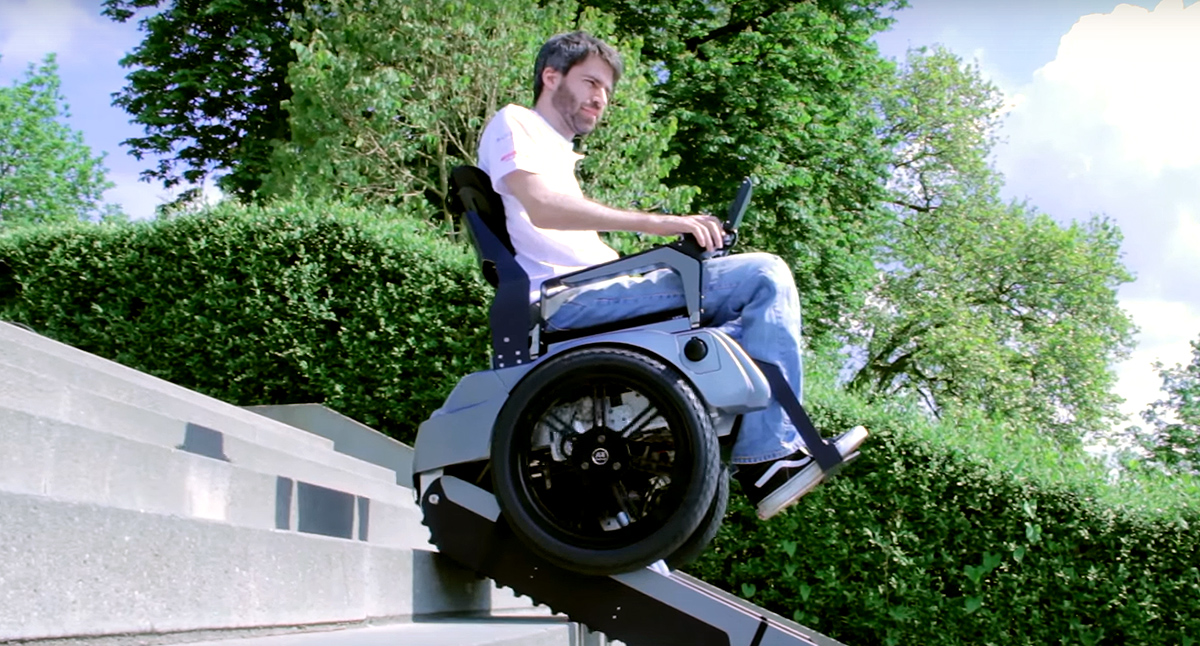 By traveling backwards the user can see what is below them, while a small video device similar to those used as reverse parking cameras in cars is fitted on Scalevo’s arm, allowing them to see where they are going.

“The great thing is that everything on this wheelchair is automated,” said Voellmy. “If I want to climb the stairs I can just drive up to them, turn around, press one button and all I have to do is control the velocity I want to drive at. The alignment on the stairs, the leveling of the wheelchair driver, is automated and he can control it, he can view the back with a back facing camera, and have a full, safe, driving experience.”

The designers believe that, if adopted widely, their technology could negate the necessity for access ramps and in-house stair lifts, while wheelchair users could have the option of avoiding out-of-the-way lifts.

“It was built very compact, so it’s not much wider than a classic manual wheelchair and it can still go under tables, you can go through narrow doors and use it indoors without any hassle, so it’s extremely compact in comparison to different wheelchairs and it’s very easy to use,” said Voellmy.

Their prototype was built in ten months and has been subjected to a series of tests. According to Gomes, “we tested the wheelchair on several staircases, even on a spiral staircase, because we can move the tracks independently and all kinds of staircases we are able to drive (on) like from 34 to 17, I think, degrees. And this is almost every stair. You can drive everywhere.” 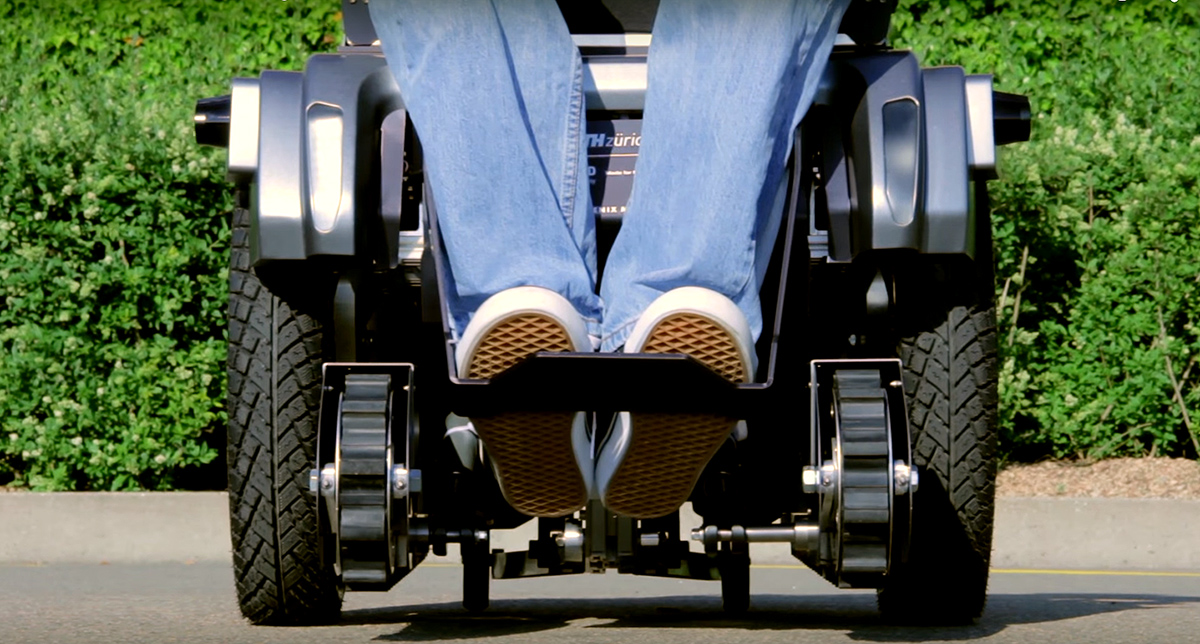 Previous stair-climbing wheelchairs have failed to make the grade. Six years ago the iBot, devised by Johnson & Johnson product was discontinued, regarded as expensive, and requiring users to have use of at least one arm and some upper body control, according to the Huffington Post.

Scalevo’s makers believe that when it eventually comes to market, their stair-climbing wheelchair will not be much more expensive than traditional wheelchairs.

Scalevo is also taking part in the 2016 Cybathlon, an ETH-organized championship for pilots with disabilities using advanced assistive devices.