Jason Rubin is a 30-year veteran of video games and the cofounder of Naughty Dog, the maker of the Crash Bandicoot series and many of the world’s best-selling titles. He sold Naughty Dog to Sony in 2001, and left in 2004. Then he moved into the world of startups, creating comics and an Internet business. He also had a brief, ill-fated stint as president of THQ before it went bankrupt in 2013.

But now he’s back as the head of worldwide studios at Oculus VR, which Facebook bought for $2 billion. Rubin says that he saw a demo and was sold on the potential for virtual reality to provide amazing, immersive experiences for gamers.

Yet he also believes that making VR right is the “single biggest learning curve” in all of his years making games. He believes that game developers have to dive in, experiment, and even fail a few times to have a shot at the financial “gold rush” that will happen if VR truly becomes a mass market.

Rubin talked about his views on VR — and whether he’ll make a VR game himself — in a fireside chat with Geoff Keighley, the creator of video game award show The Game Awards, at our GamesBeat 2015 conference. Here’s an edited transcript of the fireside chat. 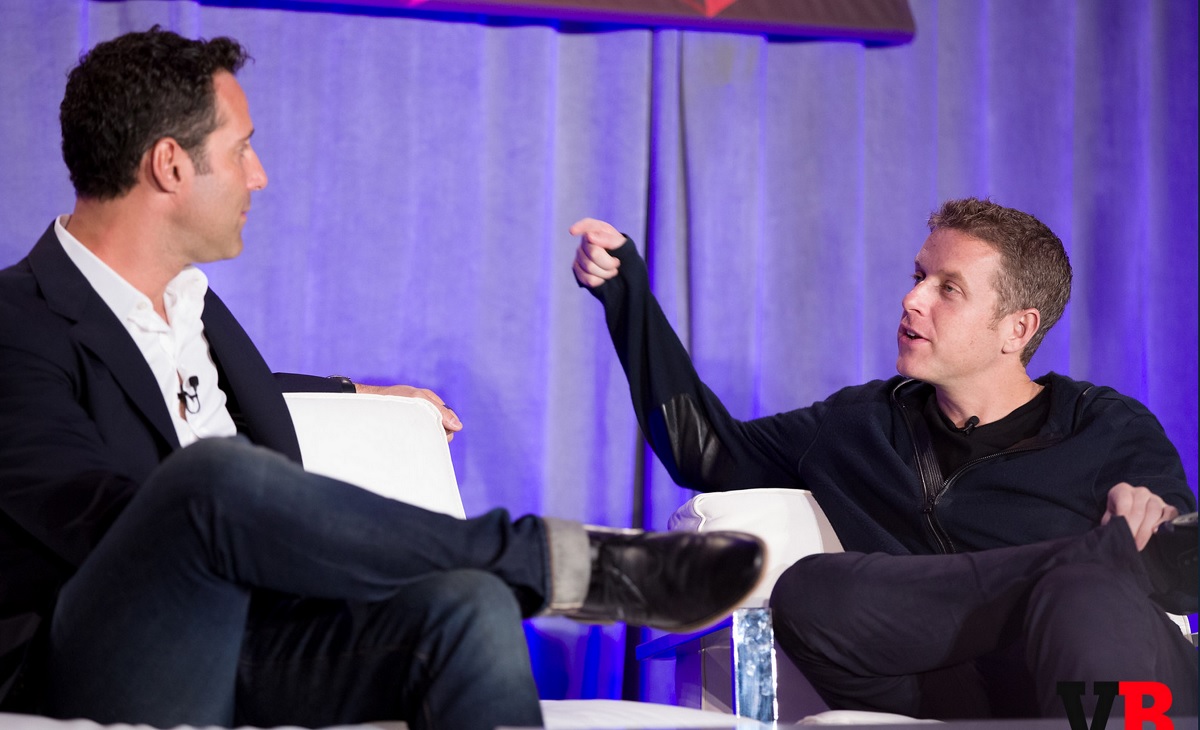 Above: Jason Rubin of Oculus VR and Geoff Keighley of The Game Awards at GamesBeat 2015.

GamesBeat: You came back to games for Oculus.

GamesBeat: You and I over the years have always talked about what it would take to get you back into games. You had ideas for games you wanted to make, but you didn’t make, after you left Naughty Dog. Let me ask you about the idea of VR in general. What was the moment for you, after working so many years on games, that you first put on VR? Were you an instant believer?

Rubin: Absolutely. Brendan Iribe called me down. He’s the CEO of Oculus. He said, “You need to see this thing.” I went in assuming I wouldn’t be that impressed. I’ve seen a lot of technology over the years. But I put it on and I was an instant believer. I got into games to make worlds. I walked out of Star Wars at seven years old and wanted to be George Lucas. I think every game maker has wanted to create worlds. After 20 years of creating flat experiences, I got—Not tired of it, but I had done the same thing long enough that I wanted to take some time off. Seeing VR and the ability to create a world that you’re completely immersed in was what got me excited to get back into games on a full-time basis.

GamesBeat: Back then they weren’t interactive, right? It was just being able to look around. That level of immersion was enough to excite you about what gameplay could eventually be?

Rubin: Yeah. The promise is there. People talk about presence. It’s one of those wishy-washy terms that no one’s really defined. But there’s a moment in the demo I got a year and a half ago now, almost two years ago, where you’re at the edge of a building. I’ve given that demo now hundreds of times. I stepped off the building, but it took a conscious decision to override my instincts not to. Nine out of 10 people or more, I can’t coach them to step off the virtual building. You say, “Look, you’re in a room. You were in a room 15 minutes ago. You know you’re not really on a building. We would never kill you. I’m gonna hold your hand in the real world. Just take a step forward.” Most people say, “I get it. But I’m not gonna do it. I can’t.” Even though it’s not interactive — no long-term gameplay, no compulsion loop, no feeling of achievement, all those things games will bring to it – I knew at that moment that if I can make you afraid to walk forward, I can make see you anything. I can make you believe you’re in another universe

Rubin: My title is head of studios. I’m in charge of all of what we call the lighthouse titles that Oculus is funding and working on. We have a production group. We’re trying to share best practices among many developers and explore the infinite possibilities that VR brings 10 or 20 titles at a time. We’ll figure out what works and what doesn’t work. VR is a unique challenge. When I started making Crash Bandicoot, Andy and I decided we would make a character action game work in 3D. Most people don’t realize how big a challenge that was. It hadn’t really been done up to that point. A lot of what Mario and Sonic and Donkey Kong Country relied on in terms of precision jumping and everything else just doesn’t translate into 3D. You can’t judge distance, especially because it was a blend of 2D and 3D. It wasn’t stereo. It was just polygons rendered on a screen. It took us a year of R&D to get to the point where we created Crash. A lot of what we did was determined by the hardware we were dealing with.

Crash is mostly an in and out game, whereas our competitor Mr. Miyamoto created a game where you run around much more freely. The reason for the difference is simple. He decided he wanted an analog stick and released the first analog stick. We were stuck with an old-school digital pad. We did in-out-left-right because that’s what we were given. This challenge reminds me a lot of that, but amplified. Everything you do, you can’t rely on what you learned in the past. Everything has to be discovered anew. For the first time, you have the ability to make someone feel uncomfortable in VR. That’s much bandied about, as if it would somehow be a barrier for VR. It’s not a barrier. It’s a challenge, but there are so many things you can do outside of that realm, outside of this space in which you feel uncomfortable, that it’s really a question of filling that space and then moving in around the edges.

How do we make a character action game in 3D? How do we move that character action game into VR? Very similar. I got that feeling that I hadn’t had since Crash Bandicoot – discovering the new. That made it exciting for me, made it worth doing. And I get to work on many projects, as opposed to just one as a developer. I’m a producer, so I get to dip my head in and out and work on many projects. It’s amazing, seeing the tiny inventions that people come up with. Sniper rifles don’t work well in VR. Imagine your vision is suddenly magnified 10 times. You wouldn’t be able to walk. High Voltage, working on a game called Damage Course, solved that problem and did it in a way that doesn’t make you uncomfortable. We’re moving into all these little areas where people say, “You can’t do that kind of game.” We’ll figure it out. It’ll be different, but we’ll figure out how to get there. 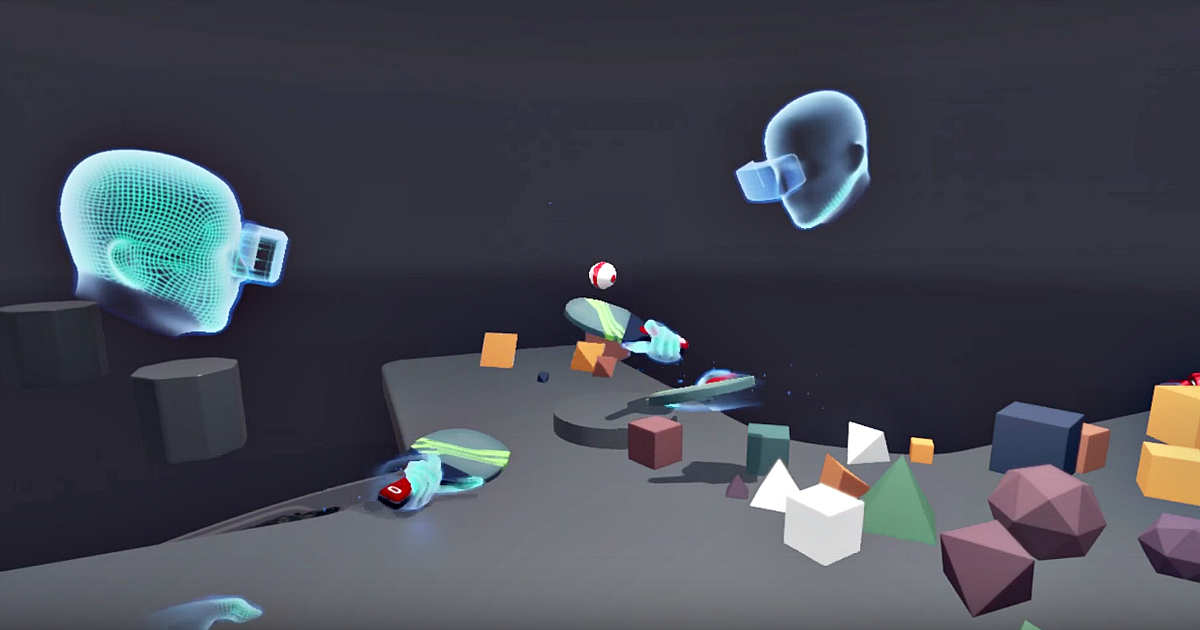 GamesBeat: How much of your stuff right now is experimental versus actual products that you know you want to eventually bring to market?

Rubin: Most of what we’re doing is products. Michael Abrash gave a speech at Facebook Connect about the future of VR. He was saying how far we have to go, and how each challenge from inner ear to eye to smell—All of these things about VR have their own challenges. We don’t know how long it’s going to take. We’re working toward it. It’s a long journey.

I live in the opposite world. I go to a developer and say, “You want to do a sports game? I want to do a sports game. Here’s your budget. Here’s your timeline. We don’t know how the hell this is going to work, but I want football, baseball, basketball, hockey. Go.” And then we have to backfill into that. Amazingly, we’ve been able to do that. We’ve shown hockey. We’ve shown football on the screen. It’s amazing. You’re a quarterback. You pass the ball and then you become the receiver and catch the ball. It’s very centered around making products, getting to products.

GamesBeat: For a lot of people here who may be in development or in companies related to VR, we’ve seen an explosion of investment in VR. A lot of people may be wondering what the addressable market is going to be. Oculus can afford to forward invest in some of these games and not necessarily think about the P&L right off. But when you think of the go-to-market strategy for games and developers, a lot of people are jumping in right now. Does the math work in terms of how many people have to work on these games for how long relative to how many headsets will be out there in a year or two?

Rubin: I thought that the challenge in my job when I started would be convincing developers to make this leap. I’ve gone at it in two ways. The first way is to say, “Remember when touch games first came out and people said it would never work?” A lot of the industry just ignored it, but a few developers decided to jump in at a time when nobody knew if there was a business there. Some of them became Rovio. Some of them were early enough that they had that hit that became massive. There was a lot of trial and error at Rovio, a lot of failed games before they hit Angry Birds. What they learned gave them the ability to get there. We’re now into multiple generations of learning and getting ahead. This is the single largest learning curve I’ve ever seen in games.

Naughty Dog just celebrated its 30th anniversary, so I’ve been at least 30 years in the games industry, and this is the single largest challenge. It also feels like an inevitability to everyone that uses it. If you believe this is inevitable, and if you believe this is a hard challenge, getting in early and failing a few times – perhaps financially failing a little bit, struggling, making sure you make ends meet – is the best way to give yourself a shot at the next gold rush in the industry. The gold rush is not there anymore in mobile, at least from my perspective. It’s very hard to get there. So that’s one way.

People have been very accepting of that concept. The second way I’ve won hearts and minds is just putting them in VR. The minute you do that, they want to do it. The most important indication of the success of VR, to me, has been the fact that every single developer I’ve signed at Oculus has asked me to do a second title. They’ve either signed or they’re pitching to do a second title. Many developers, some of them well-known developers, have said, “Listen. We’re winding down our other contracts over time. We’re all in on VR.” Not a single developer I’ve worked with has said, “After this game I’ll go back to doing something else.” It’s incredibly compelling. If all the developers we’re working with buy in, it’s going to create the content that brings the audience.